They come from Japan, Spain, Slovakia and the Czech Republic. They have non-traditional hockey addresses such as Boca Raton, Florida, Poppel, Belgium, Melbourne, Australia or Alpharetta, Georgia.
Oct 6, 2011 12:00 AM By: Rocky Mountain Outlook 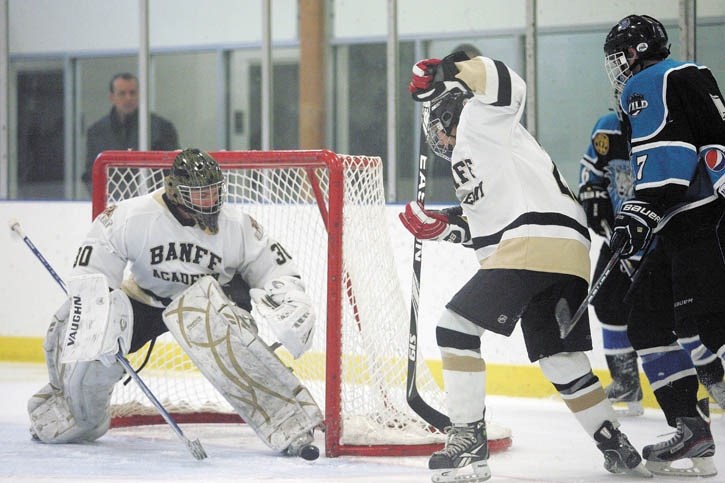 They come from Japan, Spain, Slovakia and the Czech Republic. They have non-traditional hockey addresses such as Boca Raton, Florida, Poppel, Belgium, Melbourne, Australia or Alpharetta, Georgia.

However for the 18th season, the Banff Hockey Academy will again ice aspiring young players chasing their hockey dreams.

“We’ve been reaching out more and word of mouth is getting out,” Doherty said. “Some of our players have played in less than 100 games in their life, so we’ve got work to do, but we have to remain positive and not play to the score.”

With the new Fenlands Arena renovations complete, it will be a great year for the academy.

“Having a whole year in this facility makes a big difference in our day-to-day operations,” Doherty said.

This year, the girls’ squad added eight new players to join their core of nine from last year.

“Having 17 players adds a lot to the team. We’ll have more gas in the tank in the third period,” said head coach Kendell Newell.

She noted many of the new faces are skilled players who fit well into the BHA program, fitting in with leaders Brittany Erickson, Jessica Langan and team superstar Jana Fialova.

“We have players who are gritty and that can drive to the net. They’re a great group who are committed both athletically and academically,” Newell said.

The team will play in the Canadian Sports School Hockey League throughout the season, as well as join several tournaments and exhibition matches. They’ve also scheduled a trip to the University of Minnesota to get first-hand experience of hockey scholarship life.

“We want to make sure our Grade 12 girls make it to college.”

Newell, now in her second year behind the bench, said the time has been a learning experience.

“Every day is different and I’m never doing the same thing each day, which I love,” Newell said. “I love the fact I get to help the girls push their limits and make their dreams come true.”

Director of Hockey Operations Garry Unger runs the junior team, which will again compete in the Alberta Junior Heritage Hockey League. While the team is still looking for its first win, they appear ahead of schedule.

“The team is a little better earlier. It’s still developing. When you play with guys from all over the world with different abilities, it takes time. But we’ve got some continuity and had some good practices,” Unger said.

Veterans such as Mitchell Humphries and Braam Botha help new players adapt to the league and community, Unger said.

“They help teach the young kids about the tradition of playing in Banff, so they’re not coming in blind. It’s a huge help,” Unger said.

It’s also a pivotal year for Humphries and Botha, who at 19 are in search of scholarships.

With so many international players, Unger said, a lot of the players need to learn how to play away from the puck.

“Here it’s real hockey. They have to learn their defensive position,” Unger said.

Since the goal is to ensure players develop skills, the BHA can have some ugly nights.

“It’s trying to play where we’re not playing to the score and not worrying about some of the other stuff going on the ice,” Unger said.

Much of the learning comes from putting players in new situations, Unger said.

“The young guys have never been in a position where they’ve been go-to guys. They have to learn even if they’re the 18th player on the team, we’re looking to you to make a difference in the game,” Unger said.

Thus far, he’s impressed with new additions Cas Staps from Belgium and Kyle Stephan of Barrie, Ont. Stephan’s father was a lawyer with the New York Rangers during Glen Sather’s time as coach.

“They come in with a fair amount of skill. They’re guys that are capable of scoring a goal when we need it. They have the ability to be more patient,” Unger said.

The teams all play in Banff this weekend. Check the team’s website www.banffhockey.ab.ca for more information.