The BMW IBU World Cup series is on target this season – for now – while the International Biathlon Union (IBU) has cancelled the IBU Cup’s November and December calendar, in addition to cancelling the entire 2020-21 Junior IBU Cup season
Sep 19, 2020 5:00 PM By: Jordan Small 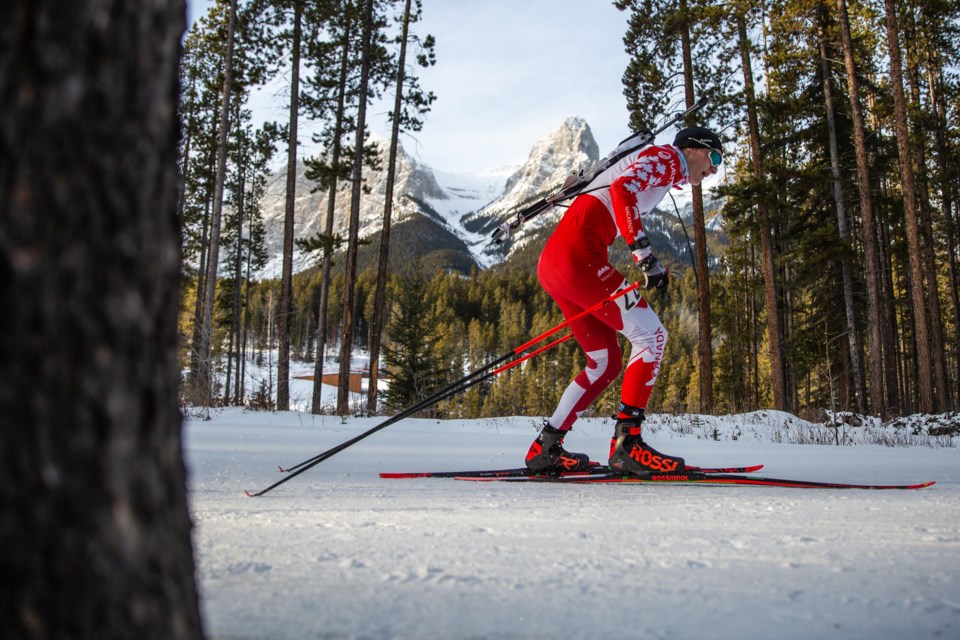 Logan Pletz competes in the Junior Men 12.5-km race during the Calforex Cup #2 at the Canmore Nordic Centre in 2019. The IBU Junior Cup season is cancelled this season. EVAN BUHLER RMO PHOTO

CANMORE – The BMW IBU World Cup series is on target this season – for now, but a number of development series events were shot down for 2020-21.

In a statement Friday (Sept. 11), the IBU said “due to financial and logistical considerations, the IBU cannot guarantee the same very high standards of protective health measures that will be delivered at the BMW IBU World Cup and the other planned events, at the Junior Cups.”

Biathlon Canada, which operates out of Canmore, said the schedule changes could affect up to eight of its IBU biathletes and up to 10 juniors, based on selection criteria, which is a high per cent age of its high performance program.

However, Justin Wadsworth, head coach of the national senior team, doesn’t suspect the modifications will have a long-term effect on the team.

“It’s not the best situation and it’s a shame for us, but at the same time I don’t think it’ll have a lasting impact,” Wadsworth said. “Hopefully the rest of the season will be scheduled for those athletes and they’ll hopefully get to some high-level competitions this year regardless.”

There are still scheduled competitions for IBU Cup and Junior Cup athletes next year.

The IBU Cup, the development series for biathletes aiming to compete on the world cup circuit, is scheduled to start in January, and the IBU Open European Championship is currently still running Jan. 24-31 in Duszniki Zdroj, Poland.

The IBU Youth/Junior World Championships, with an age limit of 20, will still take place on Feb. 24 to March 7 in Obertilliach, Austria. Local athletes will have an opportunity to qualify for the world championships.

Biathlon Canada is forming a group to work towards a safe return to competition in Canada for its developing athletes.

"Most athletes are centralized here in Canmore and there’s a group in Whistler and, of course, the athletes back east, but we’ll do our best to make sure there’s some events for these athletes in each of the regions,” Wadsworth said.

In the Sept. 11 statement, IBU said it would "support regional competitions in neighbouring countries."

Currently, the full BMW IBU World Cup schedule is going ahead as planned. However, the IBU executive board is meeting from Sept. 26-27 to decide whether adjustments will be made to the world cup’s November and December events.

Wadsworth said there is a concern similar changes could be made to the world cup circuit. His gut feeling is that the races before Christmas will be scaled back.

“We’ll know a lot more at the end of this month when the IBU executive board makes their final decisions,” he said.