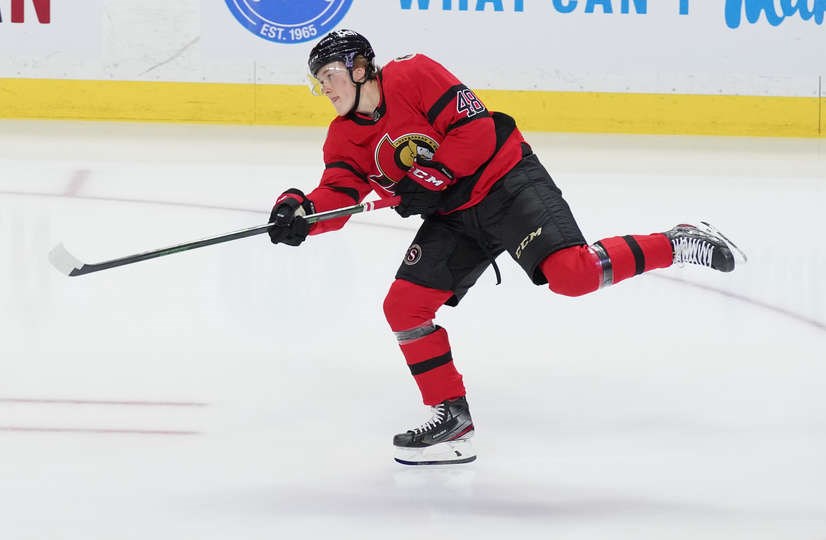 Canmore's Jacob Bernard-Docker made his NHL debut with the Ottawa Senators on Wednesday (April 14) against the Winnipeg Jets. André Ringuette/NHLI via Getty Images

OTTAWA – About an hour before Wednesday’s (April 14) game against the Winnipeg Jets, Jacob Bernard-Docker got word he’d be making his NHL debut.

Just two weeks after signing a three-year entry-level contract with the Ottawa Senators, the 20-year-old Canmore defenceman was on the ice in the big league.

“The coaching staff and all the guys did an unbelievable job at making me feel comfortable and just making it a fun night for me,” said Bernard-Docker.

"Obviously we didn't come out on the winning side there, but everyone was nice enough to come up to me after the game and say 'congratulations' and take a picture with me. It was a really special moment for me."

"It was definitely a really exciting time for me and so many people that helped me get to this part of my life and it’s a pretty special moment.”

Bernard-Docker played 15:33 in Sens 3-2 loss to the Jets at the Canadian Tire Centre in Ottawa.

The blue liner had one hit and two blocks in the game and no points and no shots on net. His plus/minus is zero.

“I felt going back and getting pucks, their forwards were really quick on the forecheck and extremely physical, so I didn’t have a lot of time with the puck and that’s obviously something I’m going to have to adjust to and kind of figure out here as we go,” he said.

Bernard-Docker was added to Wednesday’s lineup after teammate Nikita Zaitsev left warmups with a lower-body injury.

“The coach kind of just told me to be ready, so I prepared all day like I was playing, but didn’t find out until about an hour, an hour and a bit before the game,” said Bernard-Docker.

“It’s a game I prepared my whole life for, so obviously I’m going to be a bit nervous whether I find out an hour before, or if I find out a day before.”

Head coach D.J. Smith was pleased with Bernard-Docker's NHL debut, and said the young blue liner made some “smart plays” against the Jets.

“He’s a really smart defenceman,” said the bench boss. “On a tall order to come in on short notice for your first NHL game, but a lot of bright spots, not only with him but with the rest of the D as well.

“There were a couple times on the point, he made a couple good offensive plays with his head up. He’s a real smart player. He sees what’s going on and as he learns the pace and adjusts in practice, he’ll continue to get better."

"We were very good for two periods. We skated, we made plays, we broke out very well. I just think in the third period we lose to a mature team."#GoSensGo | @Molson_Canadian pic.twitter.com/gMb2NuCKpw