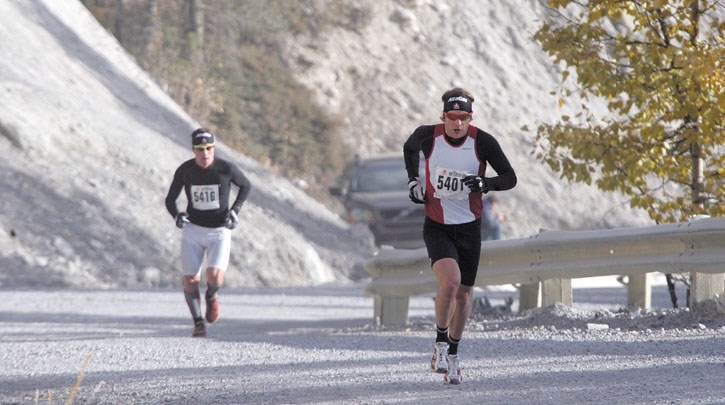 The world champion cross-country skier was the favourite going in, as the race was billed as a chance to ‘Stop Kershaw.’ However, he humbled his opposition with a time of 29:44 on the 7.5 km course, which was still slow by his standards.

“It was a tough day to run, but it felt good to get the workout in,” Kershaw said.

After finding himself on the receiving end of trash talk leading up to the race, Kershaw chose the higher ground after winning the race and complimented the Alberta World Cup Academy for putting on the event.

“I’m always happy to help the World Cup Academy and my friend Stefan Kuhn, who put together the race,” Kershaw said.

“(Trash talking) is not his style,” said teammate Ivan Babikov, who came in second.

“It was just a good pressure-free workout and a way to get this training in,” Kershaw said.

Running from the Bow River up Spray Lakes road has been a staple in the World Cup Academy’s training regimen for some time. Currently, Graham Nishikawa, who finished third in the race, holds the course record with a time of 29:23. Kershaw, however, said the grind is not on his regular running schedule.

“I haven’t run up that hill in four years,” Kershaw said.

Babikov hung with Kershaw until the last 100 metres. He said he was happy to stick with Kershaw for as long as he did.

“I think that was the last run of the season,” Babikov said. “We weren’t focused on time, but intensity.”

AWCA skier Brittany Webster was the fastest female on the course. She finished the 5 kilometre race in a time of 25:53, more than a minute ahead of second place finisher Perianne Jones.

“I went out a little hard, but it felt good,” Webster said. “My legs were a little sore and tired because my hamstring started to tighten up.”

“The last gradual climb to the finish was the toughest. You hit the sign that says 700 metres to the finish and think that’s not far, but it’s tough,” Webster said.

Most of the 76 racers were cross-country ski and biathlon athletes, however, there were several recreational athletes in the mix as well. Retired skiers Beckie Scott and Sara Renner also came out for the challenge.

Full results can be found at www.zone4.ca