CANMORE – The memory of one Canmore’s prominent cyclists was honoured during the tough and long TransRockies Rundle’s Revenge 75-kilometre race on Saturday (June 22).
0
Jun 27, 2019 5:59 AM By: Jordan Small 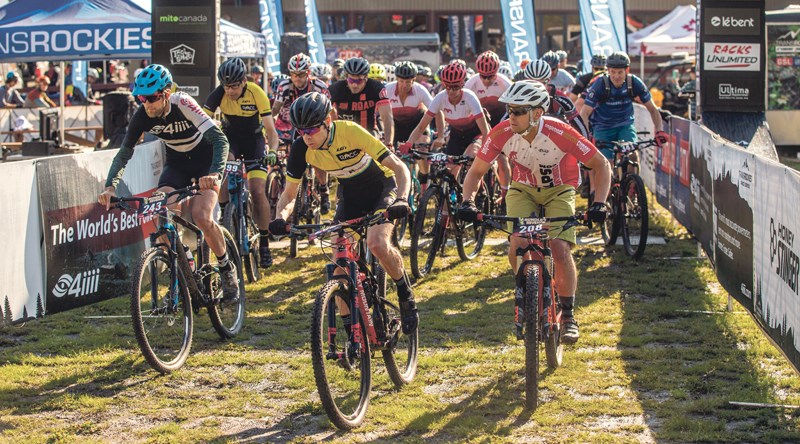 CANMORE – The memory of one Canmore’s prominent cyclists was honoured during the tough and long TransRockies Rundle’s Revenge 75-kilometre race on Saturday (June 22).

For Saturday’s big race that looped through the mountain trails at the Canmore Nordic Centre (CNC), Calgary’s Jamie Lamb took top prize at a time of 4:22:07.

Local rider Iain Ramsey did not land on a podium spot in the 75-km ride, and it took him all day to finish the race – six hours and 42 minutes to be exact – but for “most of it smiling” because it was with a friend on his mind.

Ramsey took the trails for his late friend Ryan Correy, who was an author and a well-respected member of the local cycling community. On April 28, 2018, Correy died of colon cancer in Canmore. He was 35.

After completing the ride, Ramsey posted on Facebook, and started out the message by writing “this one meant a lot.”

“A year and a bit ago I was here at the CNC watching Ryan Correy win the 24 Hours of Adrenaline. A few days later we heard the news he was fighting cancer,” Ramsey wrote.

“The community rallied and held a fundraiser and one of the auction items was an entry to the TransRockies Race Series Rundle’s Revenge. I won and didn’t think much of it other than it was a fun way to help support a friend. We lost Ryan only a few months later … I needed to do this.

“That was for you Ryan, and also for me, so thank you bud.”

Canmore’s Simon Dove finished second overall in the 75-km race and first in the 40+ men’s category at a time of 4:32.40. Dove is no stranger to Rundle’s Revenge, but it was his first attempt at the 75-km race.

“I just wanted to stay with the lead guys and just kind of see how that evolved,” Dove said. “After going into the second lap, I was riding with Jamie Lamb, who won the open men. He made a move and I was by myself and rode by myself for the duration of the third lap. I tried to look ahead at him, but he did a good job of pulling away.”

Calgary’s Ella Myers was the overall women’s winner in the 25-km race.

In the 12.5-km race, Calgary’s Matthew Cook was the only racer to break one hour, finishing at 57 minutes and 26 seconds.

The top placing local woman was Samantha Griffiths at a time of 1:06:38, and the top male was Dan Smith of Lake Louise, finishing at 1:07:53.