The 2011 Canmore Eagles want to rely on homegrown talent to produce wins. On Sunday, that philosophy paid off.
Oct 13, 2011 12:00 AM By: Rocky Mountain Outlook 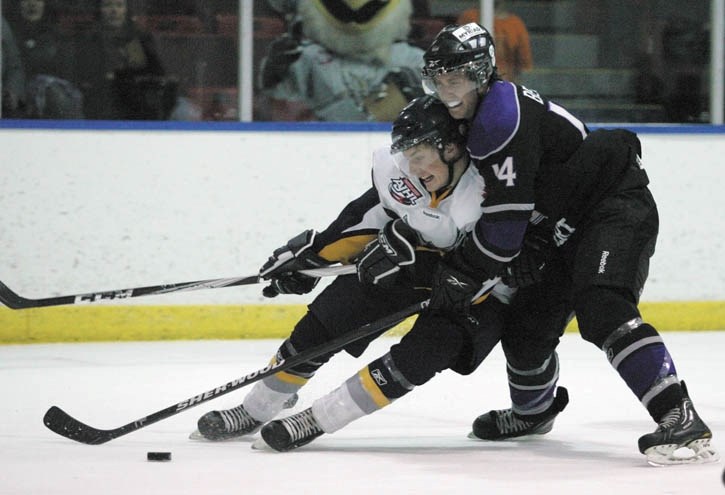 Canmore’s John Stevens tries to fight off a check by St. Albert’s Ryan Berlin as the Eagles take on the Steel at the Canmore Rec Centre Friday night (Oct. 7). St. Albert won 4-3.

The 2011 Canmore Eagles want to rely on homegrown talent to produce wins. On Sunday, that philosophy paid off.

In an AJHL season with few bright spots so far, hometown kids Luke Simpson and Simon Philp offered a glimpse of better days ahead in the Canmore Eagles’ 7-5 win over the Olds Grizzlys, Sunday (Oct. 9) at Alex Kaleta arena.

“On a scale of one to 10, that was 30. We needed something for the guys to rally around. It was a must-win,” said Eagles head coach Andrew Milne

Simpson and Philp, playing with Steven Phee, played an inspired game, producing four goals to rally the team to the win.

“I thought their work ethic was phenomenal. It provided inspiration for the rest of their group,” Milne said. “They took the next giant leap in their development.”

“Things were going well for us all night,” Simpson said. “We knew we had to do something and the bounces ended up going our way.”

Things looked grim for the Eagles early on, as they let in three goals in the first 10 minutes.

Captain Davis Claffey, who’s been moved back to defence, sparked the comeback with a powerplay slapshot from the point that eluded the Olds goaltender, allowing the team to enter the dressing room with a glimmer of hope.

In the second frame, Simpson, Philp and Phee took over with an inspired period of play.

“After the first period, I didn’t say much. The guys took over and knew what they had to do,” Milne said.

On the powerplay, Simpson unleashed a slow wrist shot from the point which eluded Olds goaltender Adam Weersink

A minute later, Phee sent a wrister into the back of the net on a nice feed from Simpson to tie the match 3-3 and chase Weersink.

However, Olds stormed back down the ice on the next shift with an odd man rush and snuck the puck stickside past goaltender Michael Salmon to retake the lead.

Phee then responded with his second of the period after he was left wide open at the side of the net. Philp and Luke Simpson assisted on the goal.

However, another mental mistake by the Eagles resulted in another two-on-one, which ended up in the Eagles net, giving the Grizzlys their third lead of the night.

In the third, the Eagles tightened their defence and Salmon appeared to calm down. The Grizzlys soon found themselves in penalty trouble and Claffey capitalized with his second goal of the game on a cross crease pass from Philp five minutes into the period.

Simpson, Philp and Phee were at it again for the winner, as their aggressive forecheck forced a turnover, allowing Philp to find Simpson in front of the net all alone.

Connor Hoekstra later added an empty netter and the win was sealed.

“This was our first night together and we found the chemistry. Everything went our way,” Simpson said.

He said he’s finally getting used to junior A hockey after starting the season on the injured list.

Captain Claffey made a smooth adjustment back to defence with two goals. He’s known Salmon since he was 10 years old and will now have more responsibility protecting his childhood friend.

“It was strange going back to defence and getting all these points,” Claffey said.

Having seen many leads disappear, Claffey said he was relieved to get the win.

“We’ve been in situations before and given up goals in the last five minutes,” he said. “It was a huge relief.”

The win comes after the Eagles dropped a 4-3 decision to St. Albert on Friday, Oct. 7.

In other Eagles notes, Carson Brown was traded to the Calgary Canucks for future considerations. The move was made to make room for new addition Luke Philp. Goaltender Brady Rouleau has also left the team following the acquisition of Michael Salmon. Milne said he hopes to work out a deal shortly.