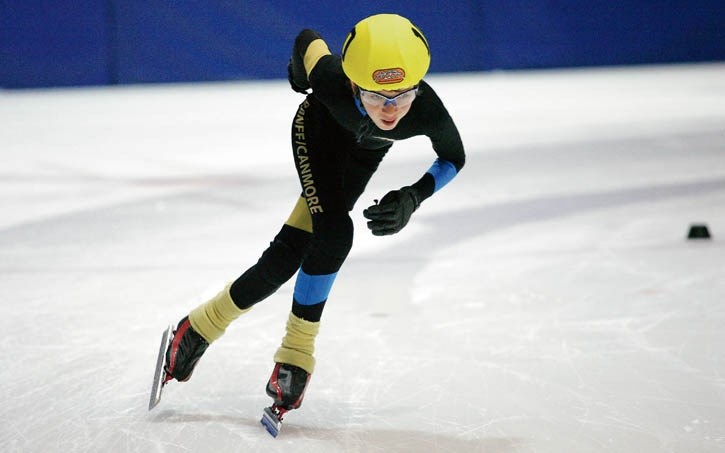 Sebastien Parent streaks around the ice during speedskating action at the Canmore Rec Centre Saturday (Dec. 12).

The ages ranged from five to 15 years of age with course lengths ranging from 100 to 1,500 metres.

“Waiting always takes the longest with the races just flying right by,” said local competitor Zack Zawada, who had a spill during his 1,500 metre race in the morning.

“It was just me, but no injuries; most have two races in the morning with two more in the afternoon and I’ll try not to fall for the next one,” said Zawada, who was looking for redemption in his afternoon races.

The Banff Canmore club is one of the smaller speed skating clubs in the province, but punches above its weight, according to coach Ryan Hickman. “We have kids that tend to go to Canadian championships and place higher than what you would think we would be able to do for a really smaller club.

“But we have good kids and a lot of kids that also come from skiing so the fitness level is just outstanding – you could really see that in the 1,500 metre races where they would lap the pack.”

The Bow Valley had competitors in six out of seven divisions competing over the course of the day, competing in two races by the beginning of the afternoon.

“We have three distances that we’re doing. Two of the distances we do with heats and finals and the last one is what we call a super final where they are placed in a race based on their accumulated points,” Hickman said. “We have good officials and good volunteers, the race staff is excellent here and they’re able to make very fast ice which helps in making it all come together on meets like this that are very popular.”

With the popularity and reputation the local competition has bolstered over the years a restriction on the number of competitor entries has been put in place.

“There are so many people that want to come and we only have so many hours in the day where we can race. So we have to cap it,” said Hickman. “If we had more kids we would have to do fewer races so in our case it’s a good problem to have – we have a good reputation and that’s how we want to keep it,” Hickman said.

An outstanding high point in the morning races for the coach was the level of technique and fitness that the local skaters showcased in their heats.

“The other club kids would come in sort of ranked in the same category, where our kids would lap them in the long distances,” Hickman said. “To lap somebody in a 15 lap race is pretty difficult to do, and it shows what we can do.”