It was the phone call Kris Mahler had waited for his whole career – sort of. The Canmore ski cross racer received a last-minute invitation to head to PyeongChang and race at the Olympics … as a forerunner.
Mar 1, 2018 12:00 AM By: Rocky Mountain Outlook 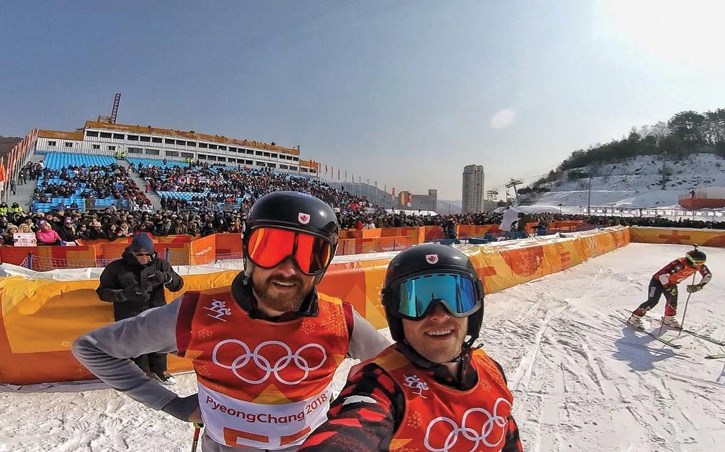 Kris Mahler, left, was chosen to forerun at the 2018 Winter Olympics.

It was the phone call Kris Mahler had waited for his whole career – sort of.

The Canmore ski cross racer received a last-minute invitation to head to PyeongChang and race at the Olympics … as a forerunner.

“I didn’t quite make the cut to compete, but I got the opportunity of a lifetime to experience the Olympics without all the pressure,” Mahler wrote from South Korea.

He was on site for teammate Brady Leman’s gold medal performance, which obviously lifted the team’s spirits, and lent a hand during the aerial events as a volunteer. Forerunners ski the course before the race, and often after crashes or delays to ensure the field of play is safe.

Mahler narrowly missed qualifying for the men’s ski cross Olympic team, but his PyeongChang experience has left him even hungrier for a start in four years time.

“This opportunity to be here and experience the Games first hand, the next closest thing to competing, is such a gift. I get to see what the games are like without the pressure to perform … not to mention 20-plus runs on an Olympic track.” Mahler said.

Soaking in the Olympic atmosphere, Mahler said he’s getting some of the best training of his season in PyeongChang, however, there have been adjustments.

The scene is more intense than a regular world cup, he said, but it’s not as overwhelming as expected.

“The hardest part has been adjusting to the food here in a completely different culture. It’s something I’ll definitely be paying more attention to looking forward to future Games,” Mahler said.

His first breakfast in South Korea included seaweed, meatballs and rice alongside toast and oatmeal.

“It’s been a dream of mine to be at the Olympics. I’m here taking it all in so the next time I’m here, I’ve got it dialed. Now Canada has an Olympic medal to defend,” Mahler said.

Walking around the Olympic venues, Mahler said there is a different vibe than North American sporting events.

“Sport is not so much of the culture here, so you can tell it’s very new to many spectators,” Mahler said. “But it’s amazing being here and watching my teammates compete on the world’s biggest stage.”

As one of Canada’s top ski cross prospects, he’s got four years to prepare.