“Overall, Emma’s in a really good position to strike, potentially for the podium in the pursuit tomorrow, so that will be exciting to watch,” said head coach Justin Wadsworth.
Dec 23, 2020 2:00 PM By: Jamey Glasnovic 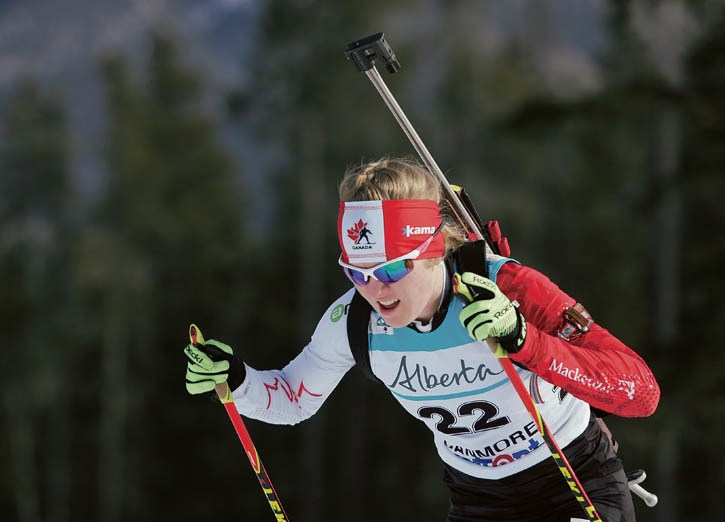 HOCHFILZEN – The Canadian team took advantage of some fine shooting to post a number of promising results at the BMW IBU World Cup Biathlon races in Hochfilzen, Austria, over the weekend (Dec. 17-20).

“As far as the last two days goes,” Wadsworth said, “the shooting was great by Emma today in her 11th place [finish], only two seconds out of eighth place, so that was a good, solid result for her.”

The team also had good shooting performances from Sarah Beaudry and Nadia Moser, who both shot nine out of 10, and finished 42nd and 64th respectively. Lunder shot clean in both the prone and standing positions and finished just one second behind 10th place finisher Dorothea Wierer of Italy.

“Overall, Emma’s in a really good position to strike, potentially for the podium in the pursuit tomorrow, so that will be exciting to watch,” Wadsworth said.

Lunder has had a good start to the season and is hoping to build some momentum going forward.

“I am happy with 11th position in the sprint,” Lunder said via email. “I'd hit 9/10 in all three sprint races so far this season, so to finally get all 10 targets down was great.

"I was a fairly early starter with bib 26, and I wasn't sure how my finishing position would hold up. Having three women [finish] in front of me, each by only one second, shows just how tight the racing is.”

In the opening men’s race, Scott Gow crashed, which resulted in a bruised rib and a broken rifle. He completed the course with a backup rifle, but finished out of contention. Canmore’s Aiden Millar also finished outside the top 60 and didn’t qualify for Saturday’s (Dec. 19) pursuit competition.

On Saturday, all four Canadian racers improved on their opening day results. C. Gow finished 31st in the 12.5-km pursuit on the strength of some more fine shooting. After missing two targets in the opening round, he shot clean after that, hitting a total of 18 of 20 targets.

On the back of another great day shooting (19 of 20), Lunder moved up one spot from her start position to crack the top 10 in the women’s 10-km pursuit. Beaudry improved by four spots to 38th on two misses.

Lunder, the only Canadian racing on Sunday, in the 12.5-km mass start competition, finished in the middle of the 30-skier field in 15th place.

The steady progression of the team early in the season has been encouraging, and over the Christmas break they will be staying in Europe, in the town of Obertilliach, Austria.

“It’s a very small town, and we’ll be the only team in a hotel,” Wadsworth said. “There’s no tourists or outside people in the hotel. So, it should be a very safe environment and we’re feeling very comfortable having the training camp there.”

After a few days off, the next training period will begin in preparation for the BMW IBU World Cup in Oberhof, Germany, from Jan. 4-10, 2021.