Canmore’s Kris Mahler has rocketed up the world cup ski cross ranking this season, and continued his quick ascension by winning bronze at the world junior championships in Val Thorens, France on Saturday (March 26).
Mar 30, 2016 12:00 AM By: Rocky Mountain Outlook 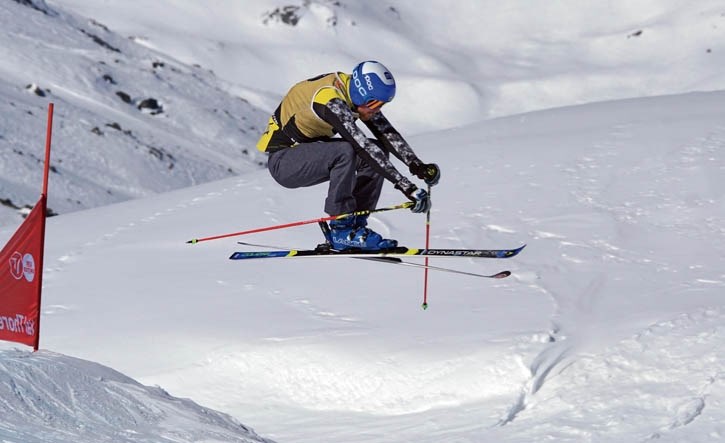 Canmore’s Kris Mahler has rocketed up the world cup ski cross ranking this season, and continued his quick ascension by winning bronze at the world junior championships in Val Thorens, France on Saturday (March 26).

Mahler had the fastest qualifying time of the competition and burned through the heats with ease before just missing the gold medal.

“It was a pretty cool way to end the season. I won the qualifier, which was pretty nice. I won all of the heats but the last one. I got tangled up with a few racers at the bottom in the last heat, but that’s ski cross,” Mahler said.

Mahler was a relative unknown when he finished fourth at world junior championships last season, but this year, with seven world cup races to his name, including a top-12 finish, he was pegged as one of the favourites. A medal at world juniors was on his ‘to do’ list.

“It was disappointing last year finishing fourth, but I was hoping this year I would have a chance to get on the podium,” Mahler said.

While his coaches aren’t terribly surprised by his success, the 20-year-old is turning a lot of heads in Canada and around the globe. Before Saturday’s bronze medal performance, Mahler had won two NorAm medals in Smithers, B.C., and was third at Canadian nationals, right behind Canmore ski cross pioneer Tristan Tafel.

“My coach is really happy, which is exciting to see. I definitely surprised some of the other coaches, but my coaches knew I was ready to perform.”

Mahler began skiing in Collingwood, Ont. with the Craigleith Ski Club, where he was trained by Bebe Zorocic, father of late ski cross racer Nick Zorocic. He and his family moved to Canmore when he was a teenager, and Mahler promptly earned a full volleyball scholarship at Keyano College while studying kinesiology. He missed skiing too much, and promptly switched back to skiing, where he was named to the Alberta Ski Cross Team.

Mentally, Mahler has made big strides this year. He’s been determined to pay more attention to the mental side of skiing – placing an emphasis on “living in the moment” instead of simply focusing on one goal. He credits the book The Mindful Athlete for helping him get through many mental hurdles.

“Physically, I’ve gotten better, but the biggest gains were on the mental side. Last year I was the underdog. This year there was a lot more pressure. I knew what needed to be done and the biggest part for me was being mentally strong,” Mahler said.

“I read that book throughout the season and, while it’s about basketball, it’s applicable on and off snow. It’s about living in the moment, not focusing on the destination.”

He had a heavy race load this year and, based on his results, should have more world cup starts next year. He is enjoying the globetrotting lifestyle, and is only home in Canmore for a week’s rest before flying to California for a bike competition. Having finished his breakout season, Mahler said the only secret to his success is fun.

“The best advice I can give is to just have fun. It’s one of the hardest things to do at that level. It’s why I do it – because I love it.”