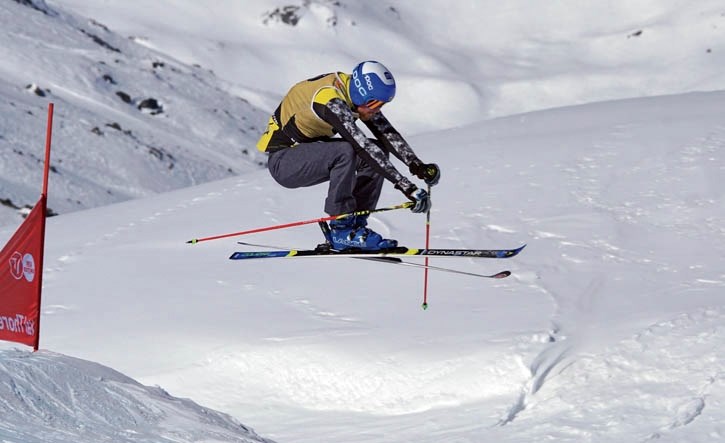 The man with the van has found himself a new parking spot – amidst the top-10 ski cross racers in the world.

Canmore’s Kris Mahler finished an astonishing seventh in Sunday’s ski cross race in Austria to record the best result of his career and march one step closer to the 2018 Winter Olympics in Pyeongchang, South Korea.

Renowned for living in his Westfalia van over the training season, Mahler’s abilities have earned him an invitation to join Canada’s world cup team full time in January.

After a disappointing race in Switzerland, Mahler obliterated the Montafon, Austria course with several excellent battles through the heats. Qualifying 17th, Mahler dominated his first heat and didn’t look back.

“I know I can be the fastest down the mountain, but oftentimes I try and go faster, stay lower, turn more, when in reality I just need to ski the way I can: calm and confident,” Mahler said. “For the finals, I brought a slightly different approach as I was finding myself worrying too much about where I was going to be once that gate dropped. I visualized instead that feeling at the finish line.”

Mahler had a great battle in his semifinal against fellow teammates Dave Duncan and Kevin Drury, and just missed the A final in a photo finish.

“Once I advanced though that first heat with a dominating performance, that smile didn’t leave my face. When I’m having fun I ski fast and today was a whole lot of fun. Calm and confident paired with focused fun was the recipe for my success today,” Mahler said.

In the small final, Mahler showed deft passing skills and took the lead on the second corkscrew after his opponent tried to shoulder him off course. Yet when he made his push for top spot, Slovenian Filip Flisar leaned heavily into the young Canadian leading into a jump. Flisar was later given a yellow card and a warning for his effort.

“It was a wild one for sure,” Mahler said. “It doesn’t change the position, but keeps the crowd wondering when I’ll be back in the finals for a fair battle.”

In a lunge at the line, Mahler again made contact with teammate Duncan, who edged him again in a photo finish.

This is Mahler’s first full year on the world cup ski cross circuit, and he hasn’t looked out of place on the top men’s team. He showed excellent speed earlier this year in winning the Austrian national ski cross championship, and his coaches are impressed with his passing ability on course.

His previous best on the world cup was a 12th-place finish last season in Idre Fjall, Sweden, but the 21-year old has certainly set himself up for more races. He’ll now stay in Europe over the holiday break to prepare for January’s world cup races. It’s a far cry from 2015, where he slept in his van driving to NorAms across the continent.