Local athletes Maya Fish and Darya Sepandj walked away with national titles to their names after taking first place in the four-day Canadian Orienteering Championship across the Bow Valley, last weekend.
Aug 4, 2016 12:00 AM By: Rocky Mountain Outlook 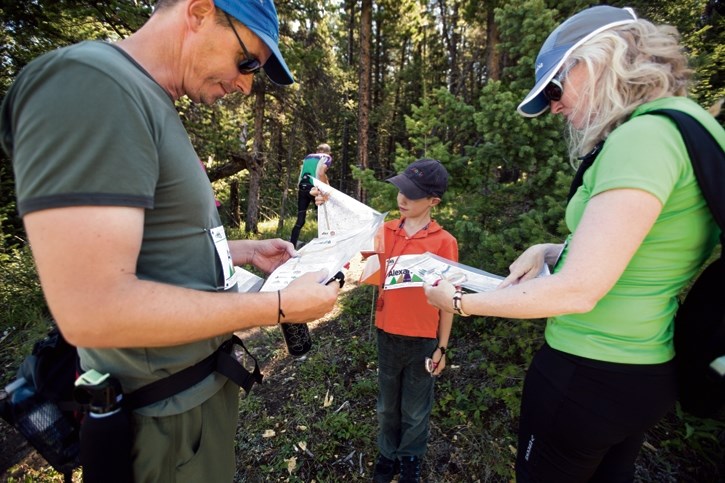 Angus Stewart, left, along with Alexander and Jeanie Bacon orient themselves during the first leg of their race during the Canadian Orienting Championships in Bow Valley Provinical Park on Saturday (July 30).

Local athletes Maya Fish and Darya Sepandj walked away with national titles to their names after taking first place in the four-day Canadian Orienteering Championship across the Bow Valley, last weekend.

A large number of bears at the Canmore Nordic Centre forced organizers to relocate the national championships to Bow Valley Provincial Park and the University of Calgary campus, but that didn’t deter Sepandj and Fish from using home valley advantage to take wins in their respective divisions. About 285 competitors from around the globe competed in the event, which is part of the Icefields Parkway Orienteering Festival.

Sepandj took first place in the women’s age 17-20 distance course at Bow Valley Provincial Park, and gold in the short course at the University of Calgary for a successful weekend.

“It was very exciting for me and slightly unexpected. I had some fierce competition heading in,” Sepandj said.

Sepandj first took up orienteering when she was nine years old, after her mother, who was a member of Canada’s national orienteering team, taught her the sport.

She switched to biathlon and currently trains with the Biathlon Alberta Training Centre in Canmore, but hasn’t lost her orienteering savvy.

“The courses were very technical. I tried to stay in contact with the map, keep my bearings and keep moving,” Sepandj said. “It was a struggle at first. On one control I tried taking a trail, and one of my competitors went running through the forest. I was surprised when we got to the control at the same time. That taught me I have to run faster through the forest.”

She won the distance race in 1:01:24, finishing 8:45 ahead of Emma Waddington. On the short course, Sepandj was victorious again, winning by two minutes over Nicole Whitmore.

“Sprint races are the hardest, as you have to use the map a lot faster,” said Sepandj, who hit 13 waypoints in 16 minutes.

Fish won the women’s 13-14 division in Bow Valley Provincial Park in a time of 29:39, nearly two minutes ahead of Alix Tessier of Texas.

“Everyone had a good time. From an organizational standpoint, it was pretty tough because of the bear situation. The danger to participants was quite high at the Canmore Nordic Centre, so at the last minute we had to move two of the races. We had been in discussion with the Canmore Nordic Centre for a year and we had an extensive safety plan worked out,” said Zissos.

Karelian bear dogs swept through the Bow Valley Provincial Park course before competitors were allowed to start each day. They did find a bear and two cubs in the vicinity.

Organizers said the Bow Valley provides excellent orienteering opportunities, and they plan to keep coming back.

“The nature of the course is very good. It tends to have pockets of highly detailed contour relief, and we like that,” Zissos said.

Graham Rennie of Vancouver and Tori Owen of Calgary proved to be the big winners of the competition, claiming overall national titles. The competition concluded a week of orienteering activities across the mountains.

“A lot of people pick their holidays around orienteering events. We started in Jasper with three races up there for westerns. We then had time to wander down here and do some hiking.

The national junior team had a camp in Cochrane, and we hosted nationals,” Zissos said.

Full results are available at barebones.ca.