Rusty or not, Canmore's Brian McKeever presence was felt at the Para Nordic World Cup.
Mar 25, 2021 4:00 PM By: Jordan Small 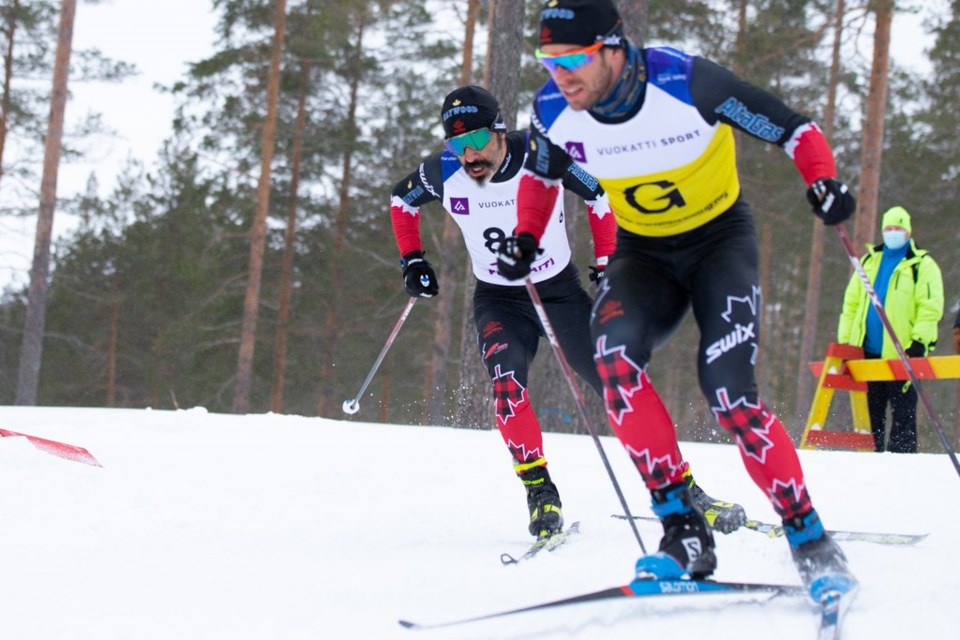 FINLAND – Brian McKeever felt a little rusty in his only races of the season.

With that said, there’s a big difference between regular athletes scraping off out-of-racing-shape rust, and when it’s done by the most decorated Para Nordic athlete of all time.

In Vuokatti, Finland at the Para Nordic World Cup this week, Canmore’s McKeever with guide Russell Kennedy skied hard to three podiums (gold, silver, bronze) and a fourth place in the men’s visually impaired races to start – and finish - the flash of a season.

Not bad for “feeling flat.”

Even as the Nordic racing ended as quickly as it started for the Canadians, the 41-year-old seasoned vet was strategizing for his end goal: the Beijing 2022 Winter Paralympic Games.

“The key was to get a sense of where we fit in. Mission accomplished,” said McKeever.

“It was important to come and see where the rest of the world is. I don’t think any of us would have wanted to go into Beijing, assuming it happens, without knowing roughly where the competition is and what kind of progression they’ve had over the last year.”

McKeever wrapped up a two-month stint in Europe, where he got a fresh look at the other side of the business. While not racing himself, the 17-time Paralympic medallist put himself to work with wax duties and testing skis during the junior and youth championships, and world championships for seniors.

Getting used to COVID tests and having things stuffed up his sinuses was a “small price to pay to be able to do the things you love.”

Up until a few weeks ago, it had been uncertain whether the Para-athletes would be able to compete together this season at a world cup.

In Canada, all domestic races were axed, so having a small glimpse at the competition was imperative heading into the off season, said McKeever’s guide and training partner, Kennedy.

“Also, to get an idea what we need to work on a bit,” Kennedy said, who shared guiding duties for McKeever in 2018 in PyeongChang. “I know when Brian is in full form and peaked at a Games, we’ll be in the running to win every race, but it’s good to know what our strengths and weaknesses are going into the games year.”

Coming off his best world cup season ever, Kennedy said that strategic measures are more often executed in Para Nordic racing such as getting the latest report on upcoming ski studs, or studying the race course to pinpoint precise areas to push hard at to make up the percentages.

Another factor coming into what will be McKeever’s final Paralympics is an aging body that’s breaking down.

McKeever said Beijing would be his final time competing at the Paralympics after two decades of racing.

The road there won't be easy on him, though, as he pushes through the pain for one final attempt at international glory.

“At 41 years old, the fact we are competitive, and in the game, when I’m not feeling amazing is a positive thing. I know there is a lot left in the body yet. We just need to find it. A real prep and we will be back,” McKeever said to Nordiq Canada after Monday's race.