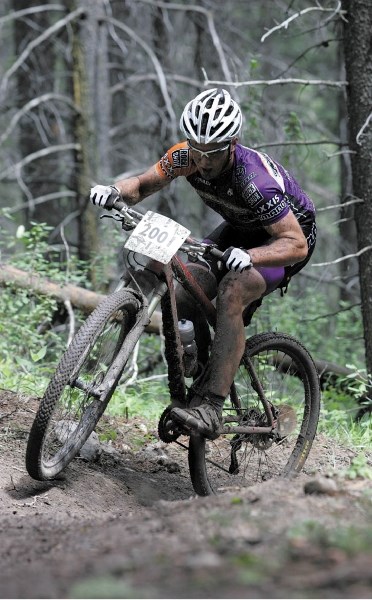 A muddy Cory Wallace leads the field through the mud in the early stages of the 24 Hours of Adrenalin Saturday (July 23).

Nadine Mueller of Spruce Grove is the 2011 24 Hours of Adrenalin women’s champion.

The race was Mueller’s fourth, however, it was not her first trip to the podium. She previously attended the 24 Hours of Adrenalin world championships in Australia as a member of Team Canada.

It was, however, her first encounter with rain on a course, but it didn’t seem to bother her.

“The course was actually almost perfect. They took out some of the steep climbs that are harder for solo riders,” she said.

The two-person event saw some of the fastest lap times of the event thanks to Jasper’s Cory Wallace and Steve Gaffney, who completed 21 laps.

Wallace, who won the solo event last year, scaled back his riding this year and partnered up with friend Steve Gaffney. Gaffney had only competed in one other 24 Hours of Adrenalin race, riding as a member of a 10-person corporate team.

“Cory called Wednesday and asked if I wanted to do it,” Gaffney said.

Wallace said the two-person team was a nice change from the solo grind.

“You’re not just biking for yourself. You’re also racing for your buddy,” Wallace said. “You have the option to pull out on your next lap.”

Both riders said the challenge is the greatest at 2 a.m.

“That was my dark moment. But when the sun came up, it was game on again,” Gaffney said.

Course conditions helped them through.

“It was one of the best courses we’ve done. The first couple of laps was quite muddy, but by lap four and five, it was fast,” Wallace said.

Wallace rode the first six laps for the duo, recording four of them under an hour. Gaffney’s first was the fastest of the day, coming in at 55:02.

Wallace, a sponsored rider with Kona, will now travel to Mongolia for a 10-day stage race. After finishing in the top 10 at Mountain Bike Nationals last week in Canmore, he balked at racing in 24 Hours of Adrenalin, then flying around the globe for a 10 day race.

“It was a good weekend. I wouldn’t want to pass it up,” Wallace said.