“It’s obviously good that [the San Jose Sharks are] looking for forwards because it gives me every opportunity to play," said Alex Young, the former Canmore Eagles star centre recently drafted by the team in the 2020 NHL Entry Draft.
Oct 17, 2020 4:00 PM By: Jordan Small 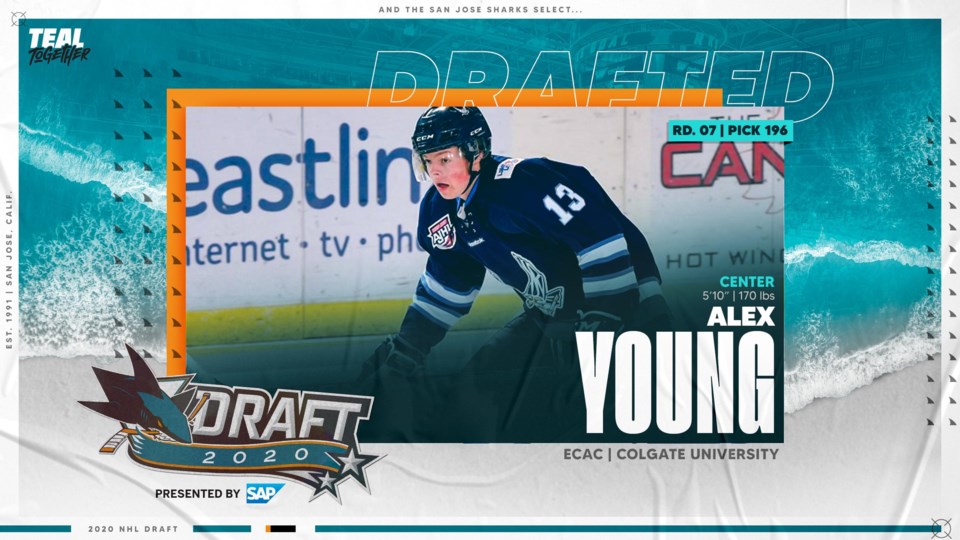 The 19-year-old centre was selected by the California-based San Jose Sharks in the seventh round (196th overall) of the 2020 NHL Entry Draft last Wednesday (Oct. 7).

In the biggest day of his life, Young experienced a full gamut of emotions from over-the-top glee to near heartbreaking aghast, while teams picked prospect after prospect.

“I was actually on the ice when I was selected,” said Young. “[My teammates] all kind of rushed out on the bench and were screaming and I was like ‘what’s going on here?’ and then I figured it was for me and everyone that was on the ice with me started cheering like I had just scored an overtime winner or something. It was pretty exciting.”

Extremely honoured to be drafted by the @SanJoseSharks organization! A huge thank you to my family, teammates, coaches, friends, and everyone else who played a part in helping me along the way! Can’t wait to see what the future holds! pic.twitter.com/3TI6fFC6LZ

Throughout the day, the nervous Colgate University student tried to be productive in class while also being glued to his cellphone, “multi-tasking” and hitting refresh on the NHL draft ticker every few minutes.

Early projections had Young being selected sometime in the fifth round. However, when the sixth round ended, the five-foot-11, 181-pound Calgary-native’s name hadn’t been called. After a previous disheartenment of not being selected in the 2019 entry draft, Young felt déjà vu with how things were playing out.

When the seventh round and final round started, Young was on the ice practising and “not full of energy" to be out there.

“I was almost disappointed. I wasn’t sure how far they had gone in the last round yet and I was just uncertain if I was gong to get picked or not," Young said. "But eventually it happened and it was a pretty cool moment."

Being on the ice with cheering teammates was a special moment, Young said.

After practice, he spoke to Doug Wilson Jr., the Sharks head scout, and said he was happy to have Young as a Shark.

“We should have drafted Alex Young last year and we’re lucky we got him this year,” said Wilson Jr. during a media scrum after the draft. “We went with best player available [in the draft].”

The Sharks made an offensive statement on draft night, selecting nine forwards.

Doug Wilson Sr., the Sharks general manager, said one of the team’s goals was to replenish its depleted forward position.

“I think you’re looking for the type of ingredients that guys can be successful in this league regardless of their size … they can all skate, they all have compete to them and think the game at a high level,” said Wilson Sr.

For Young, it's "more pressure" to beat out some of the guys for spots on the team, but offers a "healthy competition."

“It’s obviously good that they’re looking for forwards because it gives me every opportunity to play," Young said. "I also have four years of college to develop until then unless they feel like I’m ready to play and jump in before that, but I’ve got some time to develop and hopefully get good enough that I can try to crack the roster at least and sign a contract with them.”

Over the past three years on the Canmore junior A club, Young’s elite offensive prowess landed him on two south all-league teams in 2018-19 and 2019-20.

In 172 regular season games with the Eagles, the centre scored 91 goals and had 206 points and is second all time in goals for the Eagles and third all time in points.

During his last season in Canmore, Young scored 36 goals and 82 points in 53 games. It landed the assistant captain as the fifth highest scorer in the league and ninth overall in points. He was an AJHL MVP finalist that season.

“We couldn’t be happier for the entire family, they are very deserving of this," said Eagles head coach and general manager Andrew Milne in a press release. "We congratulate Alex on this accomplishment and wish him all the best in his future.”

Centre Dylan Holloway was drafted 14th overall by the Oilers. He played for the Okotoks Oilers in 2018-19.