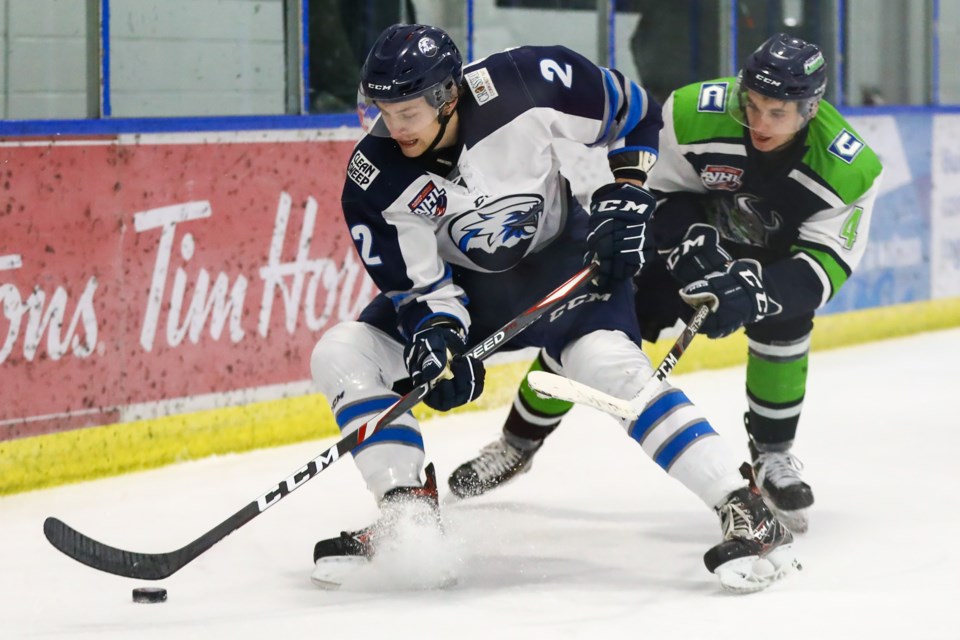 The Eagles Alex Cotton spins away from the Calgary Canucks Brett Moravec in the corner during an exhibition game at the Canmore Recreation Centre on Friday (Nov. 6). The Eagles signed the Detroit Red Wings draftee, Cotton, a six-foot-two defenceman, on loan from the Lethbridge Hurricanes of the Western Hockey League (WHL). EVAN BUHLER RMO PHOTO

CANMORE – New Canmore Eagle Alex Cotton is here for a good time, not a longtime.

When the Eagles signed the Detroit Red Wings draftee, Cotton, a six-foot-two defenceman, it was clear his focus with the Junior A club is to help put some Ws on its record and improve his game while on loan from the Lethbridge Hurricanes of the Western Hockey League (WHL).

“I think I just gotta help them win, that’s basically it,” said Cotton, 19. “I’m a bit of an offensive guy, so I’ll try to produce as much as I can and just play smart hockey and just help them win games.”

With the WHL not operating until at least January, the league allowed its players to seek opportunities for game play wherever they could.

Cotton has played the past three seasons with the Hurricanes and scored 20 goals and 67 points in 63 games during the 2019-20 campaign, leading all WHL blueliners in scoring.

The standout season led to a fifth round (132nd overall) selection to the Red Wings in October.

From the windy prairies of Lethbridge, a connection on the opposite side of the province in the Rockies had already been in place between Cotton and the Young family, consisting of current and former Eagles Colton, Kyle and Alex, a 2020 San Jose Shark draftee.

Having heard positive things about the team and town, it made for an easier transition to come and play for the Eagles.

“I think I chose this organization because I have a few buddies on the team and I heard Canmore was a really nice place," Cotton said. "I love it here, to be honest, I love playing hockey here.”

From a coaching staff perspective, it never hurts to have a high-quality player on the squad. Plus, the team was looking a little thin at the blue line and wanting to bring in WHL players.

The Eagles defensive depths were weakened leading up to the season after Riley Bodnarchuk was traded away for not reporting to camp, and U.S. prospect Parks Wallace likely won’t play in Canmore this season due to COVID-19 and the border being closed.

It was a simple decision to sign the offensive-defenceman, said Andrew Milne, Eagles head coach and general manager.

“For us, it worked out well because we know he’s only here until the end of December, but I think he’s going to be able to leave an impressionable mark on our back end and guys can learn from him on a daily basis,” said Milne. “He’s very good at the game and playing, and I think that’s a big benefit to everyone.”

This is Cotton’s first go in Junior A hockey. He had five helpers for the Eagles in two exhibition games against the Calgary Canucks on Nov. 6-7.

“Hockey is hockey,” Cotton said. “The only difference is just the speed, I think, that’s the main thing from all levels.”

The Eagles and the rest of the AJHL will play in a shortened regular season for 2020-21 with 33 games scheduled from November to March. The Eagles season home opener is Friday (Nov. 13) against the Drumheller Dragons. Puck drop is 7 p.m.