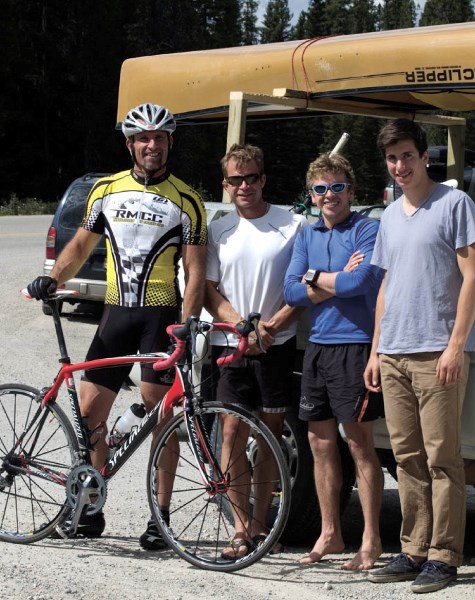 The group of athletes led almost every minute of the paddling, peddling and running race on what proved to be a gorgeous summer day.

The team held the lead after the starting mountain bike leg thanks to a strong ride by Freeman, who pulled double duty in the race.

Team Graymont overtook the leaders on the run thanks to an amazing pace set by Paul Romanek. Lodge signed up for the team at 10 p.m. the night before the race and was surprised at the course.

“It was my first run in a while. They said it was a pretty flat course, but they didn’t tell me about the massive hill climb at the end,” Lodge said.

Knowing they had to make up time on the water, Norton and ski racer Neumann picked a good line through the Lake Louise rapids and actually improved on their practice time.

“We were second on the water, but Pate and I reeled them in,” said Norton. “We stayed upright and only had to do a little bailing.”

They were able to take the lead and hand Freeman, who was also riding the road bike leg, with a seven-minute lead. Freeman held on for the win.

Team Graymont, consisting of Michel Tessier, Romanek, Larry Halsall, Scott Websdale and Willie Bridge were a solid second. They were content with all aspects of their race

“We picked a good line on the paddle, which went pretty well,” Bridge said.

They hope to return next year, hopefully with a faster racing canoe, they said, which could give them a better shot at the top of the podium.

Bill Keeling, organizer of the race, was disappointed only six teams registered for the event. However, he still considered it a success.

Registration was down for this year’s race after the event was forced to take a one-year hiatus. However, with assistance from the Alberta Triathlon Association, the event went off well.

“We’ll definitely be back next year,” Keeling said.