Five months ago, everyone doubted Jan (“The Panda”) Hudec’s comeback. Too many injuries, too little time on the snow, too sore a back, is what he heard in most ski circles. He even heard it from his own mother.
Mar 1, 2012 12:00 AM By: Rocky Mountain Outlook 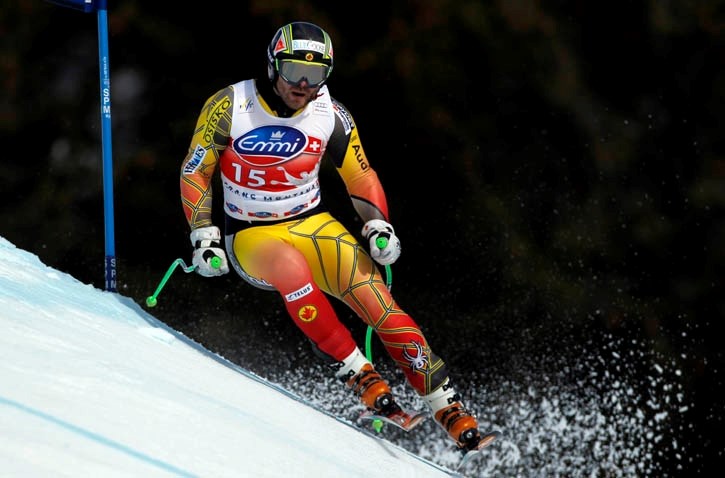 Jan Hudec sails down the super-G course to a second-place finish in Switzerland.

Five months ago, everyone doubted Jan (“The Panda”) Hudec’s comeback.

Too many injuries, too little time on the snow, too sore a back, is what he heard in most ski circles.

He even heard it from his own mother.

“We had a serious conversation last October and I played devil’s advocate,” said Vladi Hudec, Jan’s mother. “I see him from a mother’s perspective. I see the aches and pains and was thinking 20 years ahead. But he was very strong and said if he can’t make it, he would have quit a long time ago. He got angry and I got angry and there was a lot of frustration.”

Hudec responded with an unbelievable fourth-place finish at the November Lake Louise World Cup, and has only gotten better from then. Hudec continued his remarkable season with a super-G silver medal win last Thursday (Feb. 23) in Crans-Montana, Switzerland and fifth place on Saturday. It’s his second World Cup medal (also one gold) of the season.

“Oh, to have a silver in super-G. It was incredible being on the podium that day with (Didier) Cuche and (Benjamin) Raich: two icons of skiing. Even though we’re not quite in the same league yet, it felt strangely familiar or comfortable being there with those two as I’ve known them both for such a long time,” Hudec told the Outlook.

While he heard the criticism, it didn’t bother him.

“I don’t care about the critics. If I did, I would have quit a long time ago. Everyone is entitled to his or her own opinion. At the end of the day, an opinion never won anything or changed anything. Action does. I just feel bad for my mom. She didn’t see this coming,” he said with a chuckle.

His soft touch (or panda’s touch as he calls it) on the snow made all the difference in his silver medal run. While Universal Sports television commentators focused on his ‘rotund’ shape, Hudec laid down the second fastest time of the day. Hudec’s time of 1:33.27 was just behind Swiss ski legend Cuche, who stopped the clock at 1:33.11.

“I let up on the last pitch and lost it to Cuche, which was frustrating and I was kicking myself for that. The second day, my approach was way better. I fought like crazy and pinned it right to the bottom. Unfortunately, I made some mistakes and ended up fifth. Second was a better payday, but I felt better about the fifth. Always feels better to fight for what you get!”

Hudec earned the panda nickname from his coach Johno McBride thanks to his personality and form.

“It’s more of a way of life! It started like all good brands, with a nickname from Johno our head coach. I always had a beard or stubble, I’m a bigger guy, I used to have an oversized white and black helmet and then things just started fitting more and more together. Finally, I watched the movie Kung Fu Panda and I was like – ‘I AM that character! I am that panda!’”

The panda way has worked miracles for Hudec, whose confidence is sky high right now. As one of the most gregarious personalities on the circuit, he’s earned many fans amongst his peers after his countless comebacks and heart stopping performances. He says the panda persona is an offshoot of that.

“Sometimes too spontaneous for some, sometimes tardy, outgoing and silly, but when it comes to the action, something deep within comes out and it’s kung fu time. No messin’ around. One hundred per cent focus and effort to get the job done. I think it’s a heart thing,” Hudec said.

It’s a moniker even his mother likes. She apologized two weeks ago for doubting his choice at the beginning of the season. She still gets up at 3:30 a.m. to watch the FIS results roll in.

“He does have the panda’s touch. Everyone knows he has an incredible light touch on the snow. He can go on egg shells and not break them,” Vladi said.

Whatever his mindset, it’s working for the 31-year-old skier, who is in striking distance of his first Crystal Globe, awarded to the overall points leader. Following his gold and silver medal wins, he’s currently ranked third in the world and another podium finish could put him up front.

“The only adjustments I’ve made are confidence related and as you can see, confidence plays a huge role in sport. There are 20 guys that can win. But only a handful do each week. My body feels pretty good now, so I can push it to do what I need to to ski fast. That’s an amazing feeling.”

That means his back is feeling better, silencing his critics with top results every weekend.

“The back is… manageable. We’ve done a very good job of nurturing it. The whole staff, whether it’s Johno giving me the freedom to take extra days off snow when I need it. Or Julie in physio or Matt in dryland training, we’ve all found a routine that works. I’m also fortunate to be surrounded by good medical staff that care about my life after skiing so we’re trying not to take any shortcuts to feeling better.

“Last year, I was getting five cortisone shots every two or three months just so I could finish the season in the top 30, to give myself a chance to strike this year. I also changed my diet and I’ve gotten lighter, which I was worried was going to hurt my gliding, but my knees and my back feel better because of it,” Hudec said.

Hudec’s body doesn’t allow him to train at the same level as other skiers, leading to some of the comments. However, his mother still sticks up for him.

“The comments are funny. He has no fat on him!” Vladi said.

Challenging for podiums every weekend, mixing it up with the best skiers in the world is exactly where Hudec wants to be.

“How does it feel to be back in the game? Like I’m home.”