Liza Pye arrived in the Sierra Nevadas at a definite disadvantage.
Oct 13, 2011 12:00 AM By: Rocky Mountain Outlook 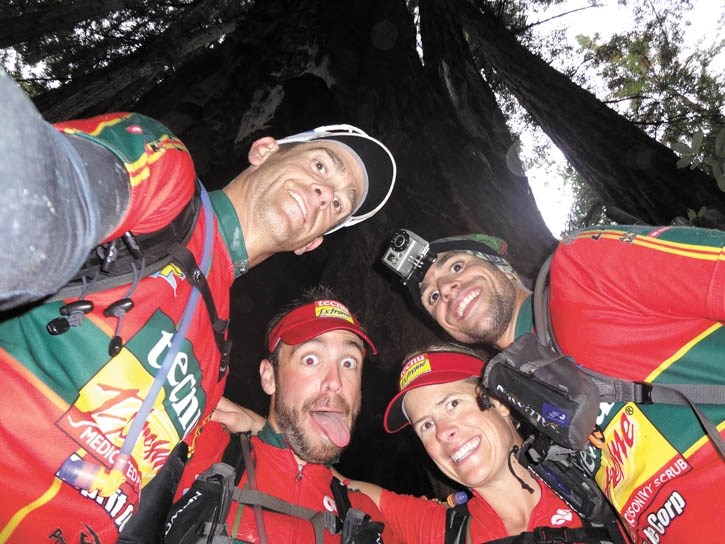 Liza Pye arrived in the Sierra Nevadas at a definite disadvantage.

She’d never been to the infamous granitic landscape an hour south of Yosemite, hadn’t raced in an adventure race in years and only had a foggy notion of who her teammates – with whom she would spend the next 74 hours grinding it out in the backcountry – actually were.

Yet by the time the opening pistol was fired and her team captain Kyle Peters bolted down the course screaming madness, Pye was ready for the pain.

So began Pye’s 2011 Gold Rush Mother Lode Low Down Adventure race win, a gruelling three-day adventure that ended with her earning a qualifying spot to the world championships in Tasmania, Australia.

“I did more work than I expected, helping with the navigation,” said the Canmore-based physiotherapist.

Pye is no stranger to the adventure race circuit – multi-day events combining trail running, orienteering, climbing, rafting, cycling and a litany of other activities. She went to the 2006 world championship adventure race after years of training and competing out of her hometown of Ottawa.

“I moved to Canmore two and a half years ago. I left my old team and kind of dropped it,” Pye said.

Instead, she found herself running trails, zigzagging through the backcountry from Mount Shark to Sunshine Village, or along the Rockwall trail.

“Living in Canmore gives you an advantage,” Pye said.

After a two kilometre run through Yosemite, the team quickly made it to their bikes, where they tackled a long road ride with a 27-pound, inflatable dingy and four kayak paddles on their back. Their first checkpoint was in the middle of a lake and Pye’s team, Tecnu Extreme, gambled by bringing their own fast boat.

The team reached the first checkpoint ahead of the competition, reaching the end of their paddle eight minutes ahead of the second place group. Ahead lay the first trekking challenge, where the team needed to rely on its orienteering skills to get to the next checkpoint. A Finnish team tried to stay with Pye’s teammates in order to piggyback on their routefinding skills, however, Tecnu Extreme did their best to avoid them.

“We tried to lose those guys as fast as possible,” Pye said.

Through the 25 mile trail running adventure, Pye ended up with a heavier than expected load, battling hot temperatures in the low 30s, with little vegetation for cover from the scorching sun.

“The guys typically carry more gear, but I took some of the other guys’ gear to help out,” Pye said.

The team used rope to drag one another around the course, keeping slower members moving up Ricky Peak, then scrambling down a scree slope where they met up with two other teams.

“I had an idea of the maps in my mind, so I knew what was coming,” Pye said.

The team made the bike transition area in hot pursuit of the leaders, however, after such a hot day, they found themselves dehydrated and exhausted with a 100 kilometre bike ride ahead of them.

Peters was showing signs of heat stroke and the team took a break to let him recover while their competitors gained ground. As dawn broke on the second day of competition, they slowly weaved through the combination of fire roads and single track, bushwhacking through a large section… in the wrong direction.

Pye was riding her hardtail and had some tough moments trekking through the woods, cycle on her shoulder. The team ended up on a parallel trail, but managed to find its way back.

“My bike weighed 27 pounds and everyone else had 19-pound carbon frame bikes.”

By nightfall, they found themselves wandering through a rugged cowfield. Their headlights illuminated the cows’ eyes and the sound of cowbells rung in the darkness, yet the riders managed to escape a stampede in the ruddy pasture.

Their next objective was at the top of the 10,000-foot high Sonora Pass, and a long downhill to the next transition area.

Bikes were then traded for running shoes and climbing gear and they sought out Eagle Peak, where a 600 foot rappel waited for them. Pye had been working with local climbing coaches before the race and was well prepared for the challenge.

“I top-roped on Meat Hooks at Grassi Lake and kept doing laps,” she said.

The teams were moving much slower than organizers anticipated – a full 12 hours behind the anticipated finish times, so team Tecnu Extreme decided to skip a checkpoint.

The decision meant they arrived at the next transition area 10 hours before their support crew expected them, so they had to search the town to find them.

Once they got the bikes prepped, it was discovered that Peters’ bike had a broken fork – trouble considering the team had a 100 mile bike ride ahead of them, traveling to 10,000 feet. Fortunately, Peters was able to borrow a bike from one of the race organizers and carry on.

After the bike, the team learned they were again in first place while entering the final paddle, a lead they would not relinquish.

On Sunday, Sept. 11, they crossed the finish line after 74 hours – having only squeezed in two hours sleep over the course. The win sends them to the world championships on Oct. 31 in Tazmania.

“We knew Tazmania was a possibility. We’re super psyched to have achieved that goal,” Pye said.

Heading into the championships, which will be twice the distance, Pye said keeping a clear head is key.

“Our goal is to run a clean, smooth, healthy race and push ourselves,” Pye said.

The experience has already been worthwhile, she said, as she’s made three new close friends.

“It’s a feeling of family with the team. Four days later, you feel like you’ve known your teammates for five years. You don’t get that with individual sport. Your teammates are never more than 50 metres away and it’s a good feeling to accomplish something so great,” Pye said. “My best friends in life are the people I race with.”

She’s busy training in the area and her coworkers at Ascent Physical Therapy and Performance Lab are hosting a fundraiser to help pay to get Pye to the world championships. The fundraiser will take place Oct. 23 from noon to 5 p.m. at Ascent, with a $10 entry fee.

In the meantime, Pye is working on her mental game, preparing for what could be a nine day race.

“There is a lot of mental work that goes into these races. It’s not your muscles that get really tired – although they do get tired. It’s your brain,”

Pye’s progress at the world championships can be seen at www.xpd.com.au