Camryn Gooch broke a club record in the 25 metre breaststroke and Avi Elizabeth Lamb medalled in every race she entered as the Bow Valley Riptides hosted their first swim meet of the season, Oct. 29 at the Canmore Rec Centre.
Nov 3, 2011 12:00 AM By: Rocky Mountain Outlook 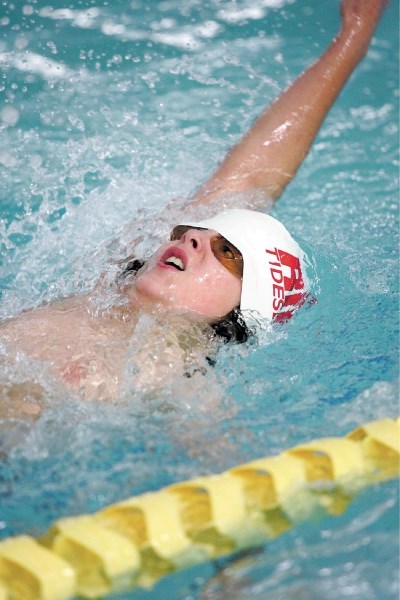 Camryn Gooch broke a club record in the 25 metre breaststroke and Avi Elizabeth Lamb medalled in every race she entered as the Bow Valley Riptides hosted their first swim meet of the season, Oct. 29 at the Canmore Rec Centre.

Gooch shaved more than a second off her previous breaststroke to secure the club record at 27.17 in the 10-year-old girls category. She also struck gold in the 25m fly, silver in the 25m freestyle and bronze in the 100 m medley.

“Everyone swam really well and all improved. It was our first meet, so there was a big learning curve for the club,” said head coach Don Trembley.

Along with the first-place finishers, Trembley said several of his swimmers showed definite improvements. Julie Cavaliere was faster in every race she entered while eight-year-old Florence Pouliot won a gold, silver and bronze in the first meet of her young career.

“They were pretty nervous, but focused on improving themselves,” Trembley said.

Those who showed the most improvement were those who worked hard in practice, Trembley said, as he commended the hard work put in by his athletes leading up to the meeet.

“Commitment and practice helped them achieve their goals,” he said.

Hosting a meet was another learning curb for the club.

“It brought the whole team together. It was good to have a meet at home and not have the kids intimidated. The parents helped a lot,” Trembley said. “We hope to run another in the spring.”

The club will host an in-club time trial in December and will send several swimmers to Calgary meets in December.