To say Magi Scallion had a busy weekend would be an understatement. The trail ripper began her weekend shredding the mountain bike trails in Rundle’s Revenge, Saturday (June 25) by winning the 25 kilometre race.
0
Jun 30, 2011 12:00 AM By: Rocky Mountain Outlook 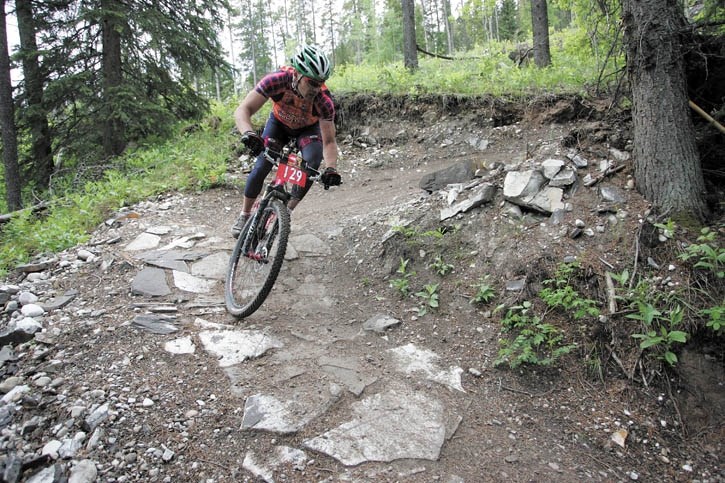 To say Magi Scallion had a busy weekend would be an understatement.

The trail ripper began her weekend shredding the mountain bike trails in Rundle’s Revenge, Saturday (June 25) by winning the 25 kilometre race. She was the top overall finisher with a time of 1:41:54 among all male and female competitors.

She followed that up with a tough leg of the Kananaskis 100 (her team finished 12th out of 158), only to return Sunday to the Canmore Nordic Centre for the Rundle’s Revenge running race, where she finished third overall in the 12 km run. Through two podiums and a gruelling run over Kananaskis trails, Scallion took it all in stride.

“It was a good course and a fun event. It got a little muddy in parts, but it went well,” Scallion said.

Her story was surprisingly common amongst competitors this weekend, as Rundle’s Revenge took its toll on more than 200 brave cyclists and trail runners in the Bow Valley.

Only a handful of athletes challenged both the 100 km bike and 50 km run together, however, there were a large number of 50 km trail runners. Jack Cook won the event in 4:43:10, followed by Toby Roessingh and Rosemarie Gerspacher (1:21:28).

Aaron McConnell, president of TransRockies, said the event was a success and he wants to see it return. He’s already booked the Canmore Nordic Centre for next year’s race.

A small group of athletes competed in both trail running and mountain biking events, however, he expects to see that number grow. Many of the competitors expressed interest in increasing their distances next year.

With only 100 competitors a day, the event has lots of room to grow. McConnell said he’d like to see the event double in size next year.

“We got a bunch of last minute sign ups, so we had 220 athletes over the two days. People really liked the course and the format,” McConnell said. “There was a lot of new single track, but we didn’t include anything super steep or super technical. We tried to have a lot of fun stuff.”

While the ultimate challenge (100 km mountain bike and 50 km run) failed to attract many athletes, he says it isn’t too difficult.

“When you compare it to other endurance sporting events, it’s not over the top, but it draws a small proportion of the population. It can grow over time,” McConnell said.

“Having mountain biking and trail running does narrow the field, but it’s good to have the long distance option,” McConnell said.

He said the Canmore Nordic Centre is a choice location.

“It’s one of the best venues in the world. With ultra distance, we’re doing laps, which isn’t as interesting, but the facility is fantastic,” McConnell said.