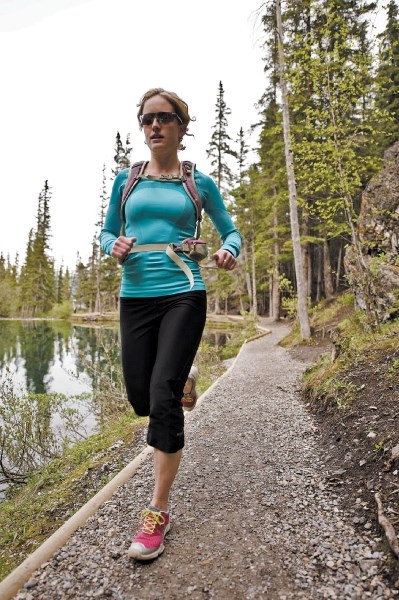 Amy Golumbia is an inspiration.

However, her favourite moment came last year after asking her 58-year-old dad Richard, who had never run a race in his life, to take up running and finish the Vancouver marathon.

“When he crossed that finish line, it was like watching one of those things I didn’t ever think could ever happen,” Amy said. “He taught me nothing is impossible.”

“I have to try to keep up with my daughter, which is a hard task,” Richard Golumbia said. “She’s done really well in the past and we expect great things in her future.”

The lesson proved to be an important one for the eldest Golumbia daughter, who, coming up to the national trail running championship at the Canmore Nordic Centre this weekend (July 9), has become one of the country’s best trail runners.

After getting her start from Carole Nelson and running with the Elizabeth Rummell School running relay, she’ll line up against top runners from across the country in hopes of earning a spot on the national team.

However, it’s the following weekend where her heart lies. Appreciative of how much running has changed her life, she’s challenged her friends and family members to run in the Powderface Marathon trail race on July 16. Thus far, she’s attracted 30 new trail runners to the event, including her father and younger sister, who had a baby just over a year ago.

“I don’t have much to offer, but it’s something I can do for him (father) and his health,” Amy said. “I’ve had amazing role models and I wanted to give back.”

Richard has continued to run since the Vancouver marathon in order to keep up with his athletic family.

“I feel good. I have lots of energy, lost weight and feel stronger,” Richard said.

The role of motivator is still new for Amy.

“As a runner, you always see other people faster than you. I didn’t see myself as someone who could inspire others,” she said. “But I wanted to use energy coming back and share with the people I care about in my life.”

She gained her own inspiration from fellow Canmorite Chandra Crawford and the Fast and Female program.

“To see the impact of getting people involved is incredible. It’s an honour to run with people who didn’t think they could do it,” Amy said.

Looking at her own accomplishments, she’s quick to give credit to others. On top of possessing tons of energy and good organizational skills, she gets a little help from her friends and family.

“I feel fortunate that with my training I have the support of my family and two patient kids,” Amy said.

Part of her ability to inspire others lies in her openness. She’s honest that running can bring about the odd dark night of the soul and plenty of pain. During TransRockies, she was struck with a virus and needed two litres of IV fluid. However, with only a day to go, she refused to let the race beat her.

“I didn’t think I could complete it, but it was a new challenge,” Amy said.

Her sister, Jessie Ashton, and husband have also taken Amy’s Powderface challenge, even though they’re still new parents. She’s been running with her father and training for the event, and is also ecstatic to see him compete.

“Watching my dad, more than anything that has impacted me. He’s always worked hard, but not taken care of himself that way. To see him do something so good is amazing,” Ashton said.

If that wasn’t enough, she also gets lots of inspiration from her sister.

“She’s able to do it all. Mother of twins and owns her own her own business while training for the TransRockies. The way she writes, there’s something about her words that just motivate you.”

“I read Amy’s blog after her TransRockies race. I haven’t been running in a while, so I figured I’d get back into it,” said Ashton. “I’ve always wanted to run a marathon, but I’m running the half this time.”

She didn’t race competitively against her sister growing up, but is happy to join her now.

“I wasn’t as into trail running. I was always a sprinter. We’re three years apart and I remember on the street racing against each other. But there’s no beating Amy,” Ashton said.

“He hates running, but wants to do it so he can say he did,” Ashton said. “But he’s enjoying it more than he expected.”

Amy plans to launch more challenges. To take one of Amy’s challenges or read about her progress, visit http://amygolumbia.blogspot.com