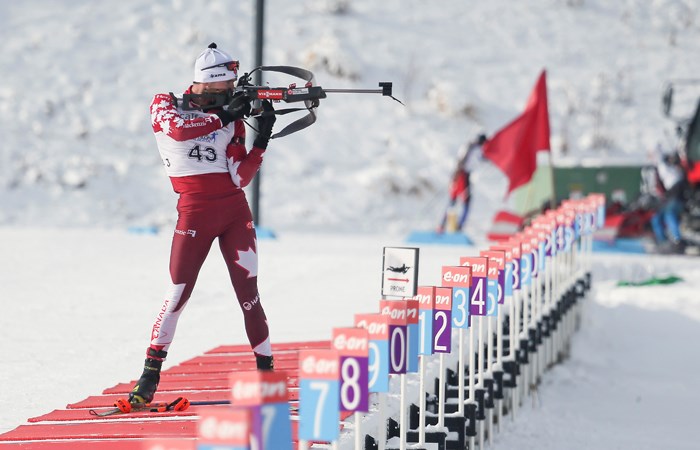 AUSTRIA – Nathan Smith, Canada’s most decorated male biathlete, has called it a career.

After thinking retirement over for about one year, Smith explained an ongoing health issue – he was diagnosed with cytomegalovirus two years ago, which has low-energy, mono-like symptoms – influenced his decision.

“(It) resulted in me missing most of the 2016-17 season,” Smith wrote, in an email to the Outlook.
“(…) It became obvious to me by last week that things had gone the same way as before. I was quite fast during the summer training season, but it seemed that once the winter keeps coming around, for uncertain reasons, I keep feeling low on energy.”

Smith, a native of Calgary who calls Canmore home, has shown a fiery fighter-like mentality in a sport that requires 10 to 15 years of dedication to reach an elite level.

After being knocked down with setbacks, Smith would build up the courage and find a way to quickly bounce back. It’s this winning attitude and perseverance under adversity that earned Smith a world championship medal in 2015.

Smith’s bout with cytomegalovirus was expected to pass, and he was supposed to return to top form, but only the marksman’s precision shooting on the range remained extraordinary.

The demanding skiing aspect of biathlon never fully recovered for him like it was hoped to throughout the season, which is why the G.O.A.T’s sudden retirement surprised head coach Matthias Ahrens, who was “at a loss.

“It has been quite emotional for all of us,” Ahrens said, who coached Smith for 13 years. “I think first and foremost, he has shown what is possible and with Nathan, he’s a hard worker and he’s always bounced out of setbacks. It is frustrating, two years now he’s been trying to come out of this and it just didn’t happen … he has overcome big setbacks and has succeeded at the end, but this last one it did not happen.”

Smith leaves competitive biathlon as the most decorated Canadian male of all time, which is still a weird thing for him to hear, Smith admits.

“I don’t really feel like the greatest ever, but whenever I get asked about that I remember that it actually is true,” he said. “It’s feels really good to know that I’ve done something no other Canadian male has done yet.”

Smith got his start in the sport at age 10. In 2002, he represented Canada internationally for the first time.

As a junior, Smith won a bronze medal at the world junior championship in the 4X7.5-km relay.

A decade later, Smith etched himself into Canadian history as the first male biathlete to earn a world medal, winning silver in the 10-km sprint. Later that season, he’d win gold in the world cup 12.5-km pursuit race.

To make the golden win more remarkable, Smith accomplished the feat with a skeleton support crew. He, and biathletes Brendan Green and Rosanna Crawford were joined by head coach Ahrens and wax technician Tom Zidek, who worked through the night to prepare the team’s skis. Most world cup teams have an entire support fleet, however, the Canadians bested them all on a budget.

Smith was named 2015’s Alberta Male Athlete of the Year.

In 2016, on the biggest stage in biathlon, in the biggest race of the season, the Canadian biathlon team of Smith, Green, Christian Gow and Scott Gow shocked 60,000 biathlon fans by winning bronze – Canada’s first ever relay medal at the biathlon world championships.

Smith competed in the 2014 and 2018 Winter Olympic Games, where his best individual result was finishing 11th in the 12.5-km pursuit in Sochi.

“We are such underdogs in this sport,” said Smith. “Even though I didn’t accomplish every goal, especially in the last two years, it’s still amazing to me that I had the privilege to stand on the world championships podium as an individual, and also as a team with the men’s relay. I never dreamt in my wildest dreams that either of those would happen when I first began racing internationally and realized the level of the European countries.”

Smith added that despite retiring, he would like to get into coaching to some degree while he pursues his next goal of becoming a fish and wildlife officer.

“For sure it will be a pretty small role for the next year or two, so I can finish my education and establish a new career,” Smith said. “I think it’s important that I use the knowledge and experience I’ve gained to help

Canadian biathletes reach their goals. I have lots of ideas and will help out wherever I can.”