Lake Louise has put the final touches on a snowcross course that will host the Canadian championships in March. The course opened to the public last week and will be ramped up for several competitions over the course of the winter.
Jan 20, 2011 12:00 AM By: Rocky Mountain Outlook 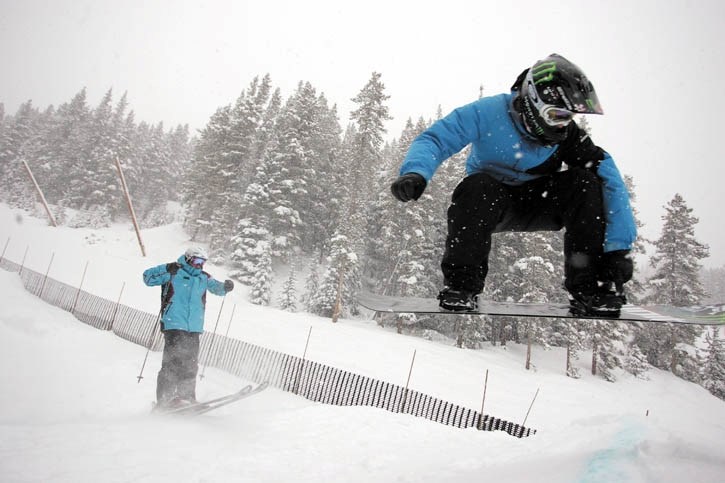 Lake Louise has put the final touches on a snowcross course that will host the Canadian championships in March.

The course opened to the public last week and will be ramped up for several competitions over the course of the winter.

Johnny Balfour is one of the architects of the course. He compares the run to a motocross course with snow, as many of the features are the same: banked turns, step-up jumps and rollers. In all, the course has eight corners and 25 features.

“The challenge is to get the course to flow naturally,” said Balfour.

The key is controlling speed, Balfour said, as jumps are used to slow riders down after several wicked turns.

“If we find there’s a fast section, we follow it up with a sizable jump,” Balfour said.

The jumps and features can be used by all ages, as Balfour and Jim Sidorchuk, president of Evolve ski and snowboard cross club, wanted a course to be open for the public.

“We didn’t want people rocketing straight up. We went for longer, lower air, with a few step-ups,” Sidorchuk said.

Sidorchuk spearheaded the push for a course at Lake Louise. Sidorchuk is a FIS-certified course inspector and says interest has spiked in the course after the Olympics. FIS certification means the jumps are ranked to a specific height and length.

“After the Olympics, we mentioned it to (Lake Louise ski hill head) Charlie Locke. Because of the sport’s popularity, we thought it was a great venue for a public course,” Sidorchuk said.

There are only a handful of snowcross courses in Canada. Lake Louise joins Blue Mountain, Red Mountain, Whistler, Big White and COP. Sidorchuk and Balfour said that means there is a chance the course could host world cup events in the future.

The course was also constructed with spectators in mind. About 90 per cent of the run is visible from the base of the hill.

“From an event standpoint, it’s nice to have,” Sidorchuk said.

Several alpine skiers are moving over to skicross, Balfour and Sidorchuk said, as the sport is growing quickly.

“They’re not afraid of speed,” Sidorchuk said. “And because of the Lamaze start, it puts an oomph into the world of skiing.”

“This is a fabulous opportunity for the club. This can bring the club’s training to the next level. Generally, we only get to train while on the road.”

The course will also attract more athletes to the sport, said Sidorchuk.

The success of the course will be evaluated at the end of the season, however, organizers would love to see a third world cup event added to Lake Louise.