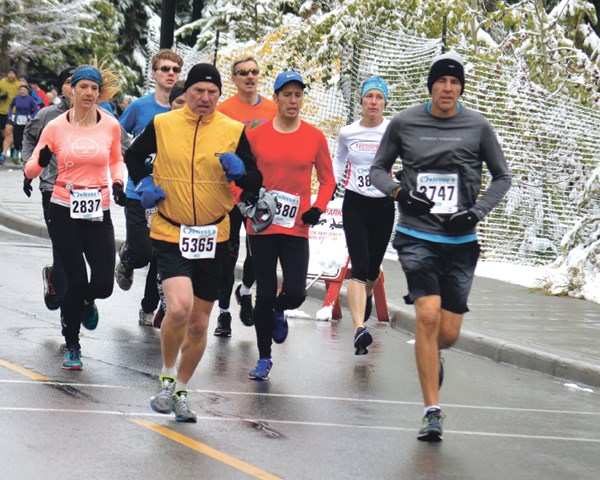 Runners hit the pavement for the 39th Melissa’s Road Race in Banff on Saturday (Sept. 22).

And, with Melissa’s popular road race scheduled, brand new organizers were initiated with the biggest dump in its 39-year history.

“Four or five times (Melissa’s Road Race has) seen snow, but this has been by far the most,” said Paul Regensburg, race organizer and director of Banff Road Race Inc.

The night before, new organizers were making final race preparations at Banff Rec Grounds as strong winds and white powder began flying down.

“I was laughing (Friday) night when it was dumping. I was like, ‘Oh my god, really?’ “ Wanless said. “This race, having volunteered for it for years, it’s notoriously spectacular and of course this year being the first year (for new organizers), they’re gonna get dumped on; just throw a curve ball at them right out of the chute.”

Regensburg and his team could only watch and move forward with preparations.

“So it’s our first year and we have to have something special, so it’s the epic snowfall the night before,” he said.

“It makes it really challenging, but it’s also pretty amazing to be running through the mountains and be looking at the snow cover and we’re literally going to see all the seasons in a day today if the sun comes out.”

The 4,500-competitor race sold out three months ago and on the morning of – snow or not – runners showed up to compete in the cold and wet conditions.

“Runners are tough people and conditions like this just slow you down, they don’t stop you,” said Wanless, the fastest woman in the speedy 5-km run at 23:20.

After the race, Wanless shared the complex strategy she used for Saturday’s snowy run.

Banff’s Daniel Habteyes channeled his inner Haile Gebreselassie and scorched through the snow and five-kilometre field with a 16:39 first-place finish.

Habteyes has a knack for winning races in town, as the Ethiopian-born runner won the Banff Marathon in June.

For the 39th time, avid runners Mary White and Jim Fry competed in Melissa’s Road Race. Fry finished the 5-km in 26:30 and White crossed the line at 38:20.

Top local 10-km runners were Banff’s Theo Engman in third overall at 37:12 and Elizabeth Halleran in eighth at 38:49.

In the half marathon, placing first was Canmore’s Duncan Marsden at 1:11:56 and Calgary’s Adriana Wild was the quickest female in 15th at 1:31:33.

Alberta Premier Rachel Notley ran in the half marathon and finished at 2:02:49.

Despite 39 years operating, it was the inaugural Melissa’s Road Race for Banff Road Races Inc., which also puts on the Banff Marathon in June, and Regensburg said the mantra is to keep everything that’s been great about the Mel’s race and bring in new and exciting features.

The new team is also using it as a tuneup for next year’s 40th anniversary race.

“This is a classic race and we’re excited to keep the legacy alive,” said Regensburg.

“It’s great to see people in rain or shine or snow, so it’s been an awesome experience, it’s been a learning experience. It’s a transitional year from last year from the former organizers to us and they helped us out a lot this year.”