The Czech Republic's Ester Ledecká won the downhill world cup at Lake Louise Ski Resort on Friday (Dec. 6) with a time of 1:31.87 – after the race was delayed an hour due to winter weather conditions
Dec 6, 2019 5:14 PM By: Tanya Foubert 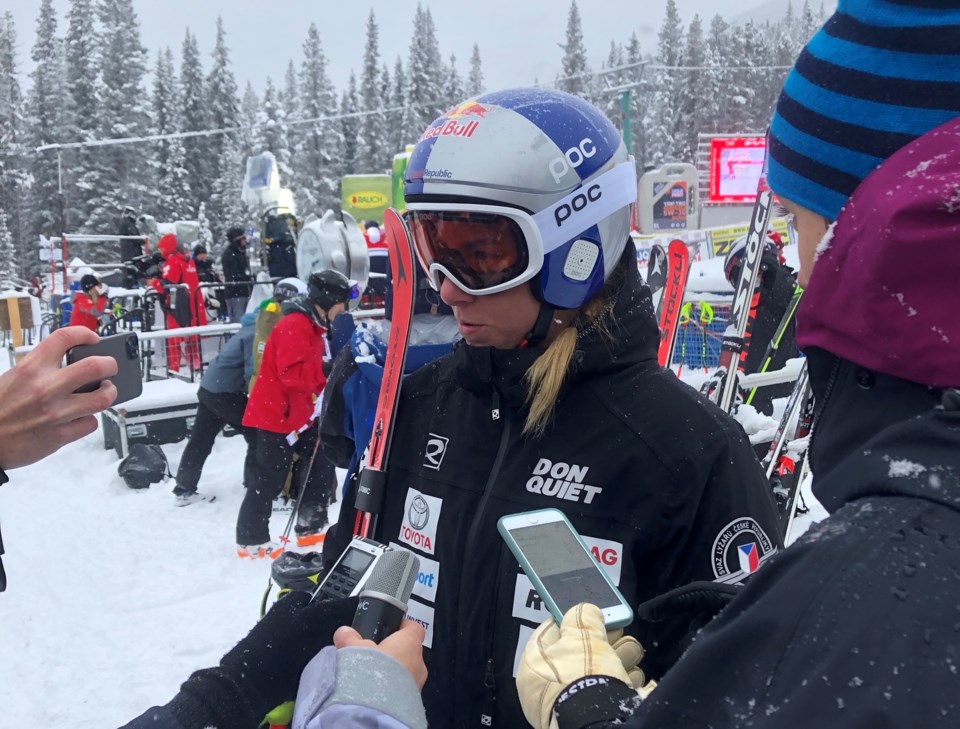 LAKE LOUISE – The Czech Republic's Ester Ledecká took the first alpine downhill ski racing world cup of the season at Lake Louise on Friday (Dec. 6) after finishing with the fastest time of what was a snowy day on the course.

The first of three Audi FIS Ski World Cups at the Lake Louise Ski Resort over the weekend was delayed an hour to start at 1:30 p.m. due to the snowy weather. The start of the race course was moved down lower on the mountain as well.

Ledecká said waiting to race during the delay was a challenge, but the race crews did an amazing job maintaining the course despite the weather.

"So that is all that matters."

It was the first downhill world cup for the athlete with a time of 1:31.87, and her first career top seven result in the discipline. Second place went to Switzerland's Corinne Suter (1:32.22) and third place was Austria's Stephanie Vennier (1:32.32).

Ledecká made history at the 2018 Winter Olympics in Pyeonchang, winning gold medals in alpine skiing for super-G and snowboarding for parallel giant slalom. She became the first person to win two gold medals at the same Olympics in two different disciplines.

The top Canadian alpine racer was Marie-Michelle Gagnon, who finished 28th (1:34.30). For Gagnon, finishing in the top 30 and receiving points as a result was a goal for today's race.

"That was my goal – it is a modest goal I think," she said. "I did not score any world cup points in downhill last year, so when you think about it – it is a good start."

American ski racer Mikaela Shiffrin, who won a downhill world cup in Lake Louise in 2017, finished 10th with a time of 1:32.83.

Shiffrin said she was happy with her result given the conditions on the course.

"I’m actually psyched, because I think I did a pretty good job on the bottom section to run the fast line," she said. "To be honest, it was pretty amazing to ski still. Even with all the soft snow, they did a really good job."

The world cup racing continues at Lake Louise on Saturday (Dec. 7) with another downhill event and Sunday (Dec. 8) with a super-G.

The women's ski racers will be able to dissect Friday's results and try to improve upon them on Saturday.

Gagnon said she will be looking to fine tune her performance and she has more "in the bank and I am in a place that I can build upon."

"I am still in the stages of learning and [gaining] experience on the speed side," she added.

The 2018 downhill world cups in Lake Louise were both won by Austria's Nicole Schmidhofer. It was the start of a successful season, with Schmidhofer becoming the first Austrian woman since 2007 to take home the downhill crystal globe.

She was seventh in Friday's first downhill world cup with a time of 1:32.61.

Second and third overall on the season were fellow Austrians Stephanie Venier and Ramona Siebenhofer. The country has 10 women downhill skiers taking part in the races at Lake Louise, the most of any nation competing. The U.S. has eight skiers, Switzerland has seven and Germany and Italy have six.

Candace Crawford and Roni Remmie are the other two Canadian ski racers competing in the downhill in addition to Gagnon. Remmie finished 40th (1:35.39) and Crawford was 47th (1:36.53).

In the downhill training runs earlier in the week, Gagnon had the best finish with a 20th place on Tuesday (Dec. 3). Remme and Crawford, however, did not start.

The Wednesday training run was cancelled due to winter weather conditions.

Norway's Kajsa Vickhoff Lie was the fastest women's downhill skier for both training runs with a time of 1:52.53 and 1:51.54. On Tuesday, Alice McKennis and Shiffrin from the U.S. team were second and third fastest.

On Thursday, second and third fastest were Austrians Tamara Tippler and Nina Ortlieb.