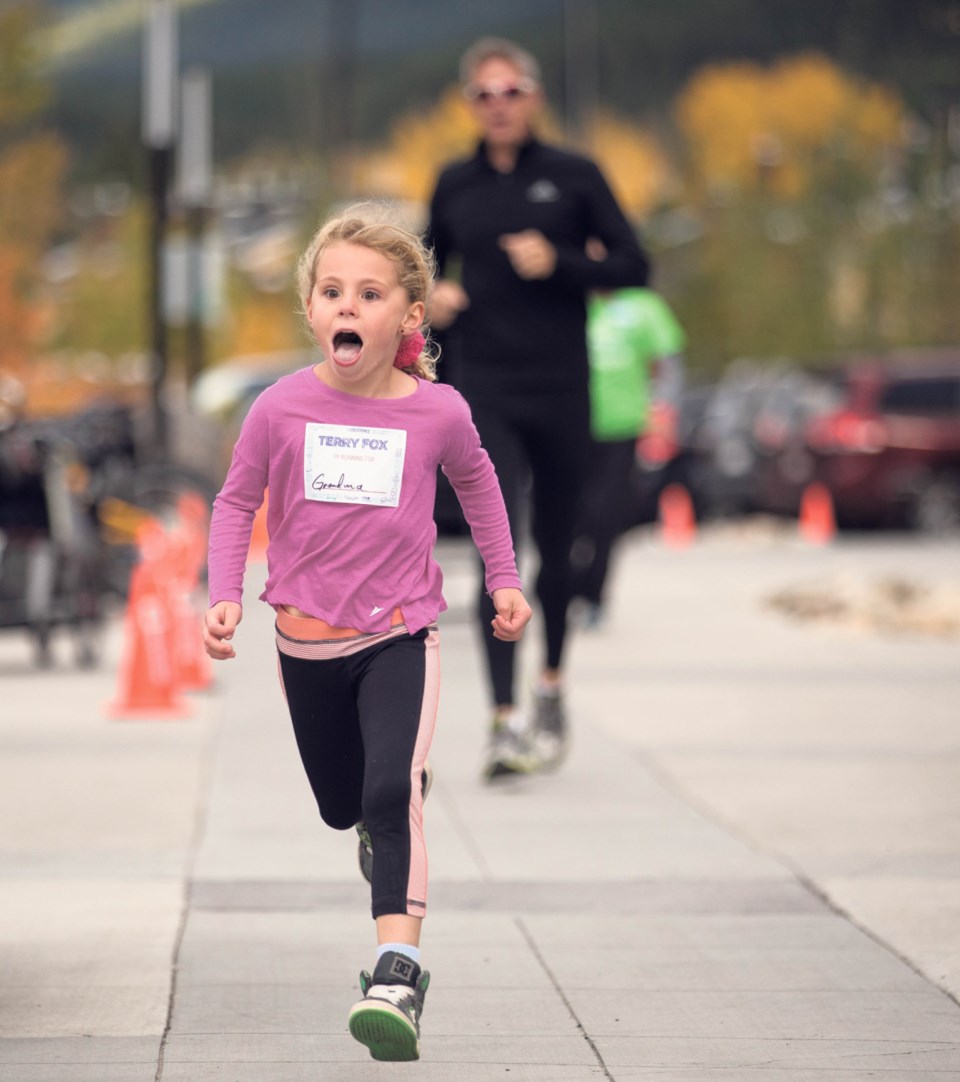 Abagail Guss, centre, puts on a shocked face as she beats her father Tim across the finish line for the third annual Canmore Terry Fox Run at Elevation Place in Canmore in 2016. RMO FILE PHOTO

BOW VALLEY – The world slowed down, but the 2020 Virtual Terry Fox Run is still moving forward.

The celebrated run that raises funds for cancer research is going virtual Sept. 20 due to the COVID-19 virus, and participants across Canada can do the run wherever while maintaining a safe social distance.

"It's going to look different this year, but we still want people to walk, run and bike on Sunday, Sept. 20, and continue to raise funds for cancer research," said Jack Gray, Canmore's Terry Fox Run organizer.

Having been too busy with day-of organizing during the Terry Fox Run over the past decade, Gray said he'll finally get another chance to do the run Sept. 20.

In the year things have drastically changed globally, it marks the 40th anniversary of the Marathon of Hope, which makes the upcoming run more special, said Suzanne White, Banff’s Terry Fox Run organizer.

“Like Terry said, he may stop, but the Marathon of Hope has to go on,” White said.

Online registration for individuals, families and teams is now open at terryfox.org.

There will be a social media side of things as well where participants are encouraged to take photos and videos while doing the run and post them online.

“[The run] is still going to happen on the day, but everyone’s going to be doing it in their own way, but we’re going to be together doing it,” White said.

As a bonus for the 40th anniversary of the Marathon of Hope, participants who sign up before May 31 are entered into a draw for a chance to win Terry Fox replica Adidas Orion running shoes.

On May 20, Adidas unveiled a commemorative collection – Terry Fox replica shoes and a T-shirt – with all proceeds going to The Terry Fox Foundation. The limited-edition collection sold-out within a few days.

On April 12, 1980, Terry Fox set out from St. John’s, N.L. to run across the country with the hopes of raising $1 from every Canadian for cancer research. On Sept. 1, 1980, after running 5,373 kilometres, he stopped running near Thunder Bay, Ont., after the cancer that claimed his leg spread to his lungs.

In May 2016, The Terry Fox Foundation announced that over $715 million was raised to support cancer research.