Two hundred metres from the Frozen Thunder finish line at the Canmore Nordic Centre, Canmore’s Jess Cockney and Devon Kershaw are neck and neck in the 1.5-kilometre sprint final.
Nov 3, 2011 12:00 AM By: Rocky Mountain Outlook 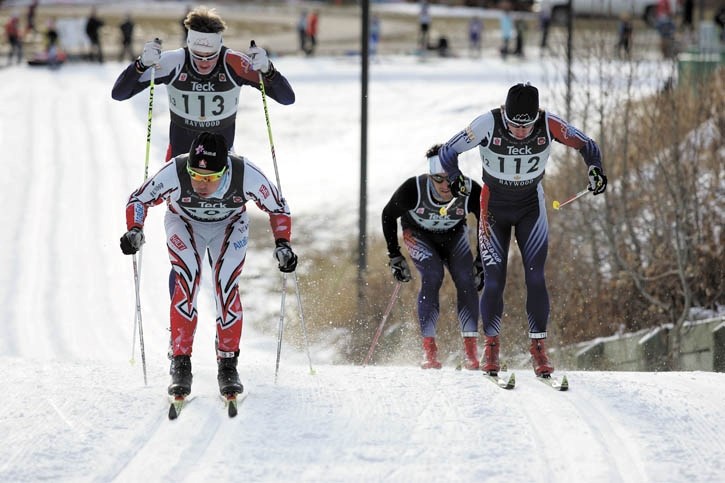 Two hundred metres from the Frozen Thunder finish line at the Canmore Nordic Centre, Canmore’s Jess Cockney and Devon Kershaw are neck and neck in the 1.5-kilometre sprint final.

The icy course is running faster than expected and the duo crest the final hill with blistering speed ahead of Banff’s Phil Widmer and the surprising Patrick Stewart-Jones, a relatively unknown racer whose made it through to the final.

Kershaw puts on his famous push, which has carried him to top results so many times on the world cup circuit. He peeks over his shoulder to see if he’s alone in the lead, expecting to glide to victory as he has accomplished through the heats.

Cockney is still there, matching him stride for stride.

Kershaw ups his double pole pace, narrowly edging Cockney by less than a second at the line, but emerges impressed with his young teammate.

“Jess was really impressive. He’s the future of sprinting for sure and he’s good in distance as well. He should take a lot of confidence from today, where he showed he can qualify the fastest and finish second in the sprint,” Kershaw said.

For a young skier who’s struggled to get through sprint qualifiers for much of his career, it was another small victory for Cockney. The race was simply a tune-up before much of the team heads over to Europe, but he saw it as a good start to the season.

“It was still a race atmosphere and I prepared as if it was a race,” he said.

“We went over the course beforehand, talking about corners and planning to ski a specific way,” Cockney said.

Coming off a season where he finished sixth at the U23 world championships and was named to the Canadian national ski team, Cockney is poised to make another leap forward in his development. He was able to participate in two camps with the national team – one at Haig Glacier and another speed camp in Whistler – and managed to study his older teammates.

“It was good to see how seriously the pros take training,” Cockney said.

He won’t go to Europe early in the season, as he’s been chosen to race on the U.S. SuperTour and NorAms in British Columbia, however, he’s prepared to race at the world junior championships. Inspired by watching Alex Harvey win gold last year, he’s keen to bring home some hardware of his own.

“I hope I’ve solved the qualifiers. My main goal this year is medals at the U23s,” Cockney said.

The Canmore native hopes his skiing will progress. While he cites former national team skier and Rundle Mountain Cycling Club superstar Gord Jewett as a major influence, he’s not much of a cyclist himself.

“We did the silver triangle in B.C. this summer. It took my teammates 4.5 hours, but it took me nine hours. I took a lot of flak from (Alberta World Cup Academy coach) Mike Cavaliere for that one,” he said. “But I really look up to Gord. He helped teach me to train like a racer and less like a kid.”

Despite a fall in qualifiers (“That was stupid,” he said), Kershaw battled through the crowd to win the day. He used the race as another training session and a break from the 50 km a day he and Ivan Babikov have been clocking on the 2-km course.

“I just tried to ski even and ski the terrain well. There’s nothing on the line, but the field at the top is as good as a Nor-Am,” Kershaw said.

He’d like to see the course host a serious race in the future.

“My dream would be to have a NorAm weekend in October. We could do it for some points and money. The Nordic Centre has done such a good job on the course,” Kershaw said.

He also used the race to try a new pole length – 2.5 cm longer than usual, as he searches for advantages leading into the new season.

Chandra Crawford cruised through the heats on the women’s side and finished four seconds ahead of Perianne Jones in the final. She’s already looking strong after an intense summer of training and appears set to regain top sprinting form after a less than ideal 2010 season.

“I feel excited about the season. Any time I ski at the Nordic Centre I have such a strong love and bond for the place. Each stride is an expression of that. At this time of year it’s especially exciting,” Crawford said. “When I take risks and put myself out there, that’s when it works out. I have to really throw myself out there.”

The fast snow carried her to some fast times, however, she recommends clister wax to anyone heading out on Frozen Thunder. She left for Europe on Nov. 1, but will be back before the new year.

“I look forward to seeing everyone at the Nordic Centre at Christmas,” Crawford said.