Terror shocked the face of Zack Janz as he peered across the line of scrimmage. The hulking Drumheller Titans defensive line, consisting mostly of 200 pound Grade 12 behemoths stared back at him.
Oct 20, 2011 12:00 AM By: Rocky Mountain Outlook 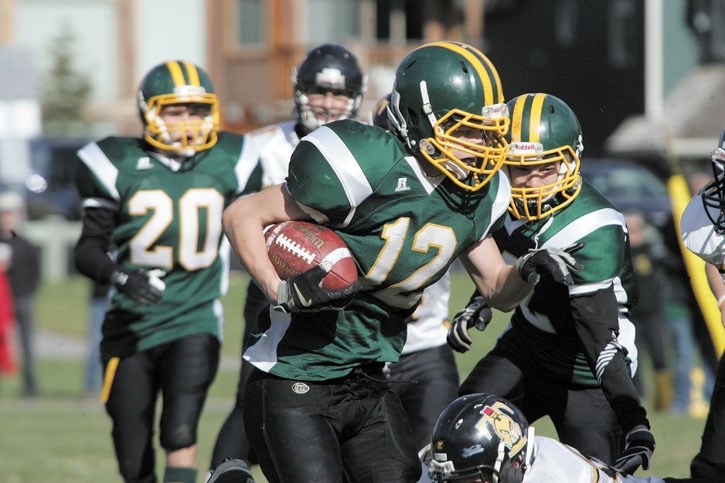 Landon Sanford looks for open space as he runs the ball for the Wolverines during Saturday’s (Oct. 15) loss at the hands of Drumheller.

Terror shocked the face of Zack Janz as he peered across the line of scrimmage.

The hulking Drumheller Titans defensive line, consisting mostly of 200 pound Grade 12 behemoths stared back at him. Smelling fresh meat, they prepared to tear the head off of the diminutive 14-year-old, 135 lb. quarterback, taking the first snap of his high school career, Saturday (Oct. 15) in Big Sky Football Conferenace action at Millenium Park.

Janz tried to forget the sight of the Titans multiple sacking of the Wolverines’ talented starting quarterback Wes Rose. He tried to ignore the fact his offensive line was drastically undersized. However, on his first pass attempt, through the fear and adrenaline, he was able to find Paolo De Soto open on the left side of field for a short gain.

On the next play, the defensive line obliterated him. Janz replaced Rose late in the game.

“It was scary seeing those big guys out there, coming crashing down on top of you,” Janz said. “I looked up at the last second and it hit me.”

Janz however, got back up and finished the game, finding De Soto again.

“I took a quick breath and passed it off. Paolo does all the work for you,” Janz said. “I will try again. I hope by next year I’ll be a lot better.”

Coach Chad McLenaghan said Janz showed a lot of guts out on the field.

“He looked good out there. He was scared out of his mind, but he showed toughness. I was proud of him.”

The quarterback’s debut was a bright spot in the Bow Valley Wolverines 43-0 loss to Drumheller. Despite moments of shining promise and definite progress, Drumheller, currently ranked third in the province, ran up the score on the young Wolverines.

McLenaghan said despite the score, he was proud of the boys who didn’t back down from a very good football team.

“They’re quite strong, but our boys played tough. We made a few mental mistakes, but it really is a matter of inches. We stopped them a couple of times to start the game and, if not for a few bad breaks, we could have had momentum,” McLenaghan said.

Experience was a factor in the loss.

The Wolverines’ defence was strong to start the match, pushing back several tests from the Drumheller squad. The Titans, though, victimized the Wolverines’ defensive line on a rookie mistake when the centre pushed the ball over the goal line as the home team was still waiting for the snap.

Drumheller got rolling in the second quarter, frustrating Rose, whose coaching staff had him doing pushups after every interception thrown. He was able to generate some momentum, however, several offside calls appeared to throw him off his game. By the half, the Titans had a 22-0 lead.

In the third quarter, De Soto and Spencer Postman played well and McLenaghan was impressed with the play of Landon Sanford whose defence was stellar.

“He’s really stepping into a good role for us.”

The Wolverines were able to blank their opponents for the entire quarter, which again proved to be a small victory.

By the fourth, the punishing Drumheller line had worn down the Wolverines, and their offence found its legs.

While there were some positives, McLenaghan said his team will pay for their mistakes in practice.

“It will be a painful week for them.”

If the team needs inspiration to get through the pain, they need look no further than Janz.