In the midst of Friday’s Lake Louise world cup ladies downhill race, a Greek tragedy broke out on the icy slopes ... Lindsey Vonn, arguably the greatest skier of all time, and a 17-time world cup winner at Lake Louise, was poised for victory 18.
0
Dec 7, 2017 12:00 AM By: Rocky Mountain Outlook 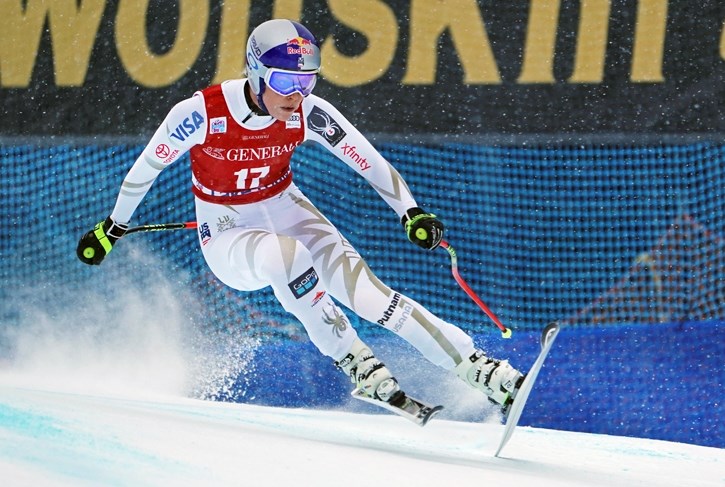 Lindsey Vonn had a rough weekend in Lake Louise.

In the midst of Friday’s Lake Louise world cup ladies downhill race, a Greek tragedy broke out on the icy slopes ...

Lindsey Vonn, arguably the greatest skier of all time, and a 17-time world cup winner at Lake Louise, was poised for victory 18. She had missed last year’s race due to injury, but was still heavily favoured to win. Confident in her abilities, Vonn was already looking forward to the 2018 race, where she wants to challenge the men.

Halfway through the course, through the treacherous fall away section, she had a half second lead on the field. The lead had dwindled to a mere .05 tenths of a second before Claire’s Corner – the final turn on the course – yet Vonn was traveling at 104 km/h with a medal on her mind.

But the ski gods work in mysterious ways.

Two days prior, Vonn was launching a new underwear line on the turquoise shores of Lake Louise. Now, she was tumbling hip-first into two layers of safety netting.

‘Lake Lindsey’ had swallowed its queen.

The crowd hushed. Vonn’s body stirred in the nets as volunteers worked to untangle the wreck. Canadian Marie-Michelle Gagnon had crashed in the exact same spot a day before, tearing her ACL in the process.

Austrian Cornelia Huetter, atop the podium, stared in shock from the winner’s circle, before hugging her teammates.

The American titan limped from the finish line through crowds crowing her praises. It was her first DNF at Lake Louise in 10 years. Vonn refused to let the tears go.

“You better make friends with pain because it’ll be around your whole life,” Vonn wrote after the crash, quoting her great grandmother.

Yet as one American fell from the podium, another took her first step to greatness.

Mikaela Shiffrin, the 22-year-old Olympic medallist, and heir apparent to the ski queen crown, proved to be the third fastest skier on the day. It was her first downhill medal on the world cup.

Like many young athletes not yet in tune with their full potential, the result was confusing. She struggled to accept the accomplishment.

“I’m still not sure what my expectations are in downhill,” Shiffrin said. “Today was an amazing day, for sure, but I also went before the course hold, and before the snow came down. It got a lot slower, for sure.”

Twenty-two is very young to win speed medals. Many ski pundits like to point out she has accomplished more at this point in her career than Vonn had. Yet Shiffrin recognizes she has a long way to go before she enters the greatest of all time conversation. She was still surprised by her first downhill podium.

“I skied like myself. I didn’t take extra risks. I can’t control what the other girls do. To come down with the green light … that’s never happened to me in speed events,” Shiffrin said.

Tina Weirather of Liechtenstein finished second (1:48:53), and 2017 champ Huetter glowed after returning from her own injury with a storybook win of her own.

The young Canadian team struggled again, gaining valuable experience, but not achieving results wanted. Val Grenier was the fastest Canuck in 32nd, three seconds off the pace, and sore from compartment syndrome surgery.

“I’m really upset about my run. After Fall Away I was really bad … I gave too much while sitting back. It’s not the position you want to be in,” Grenier said. “I know what I have to do. I’m just struggling to do it.”

Yet chatter at the finish line centred around Shiffrin. Is ‘Mikaela Lake’ far off?