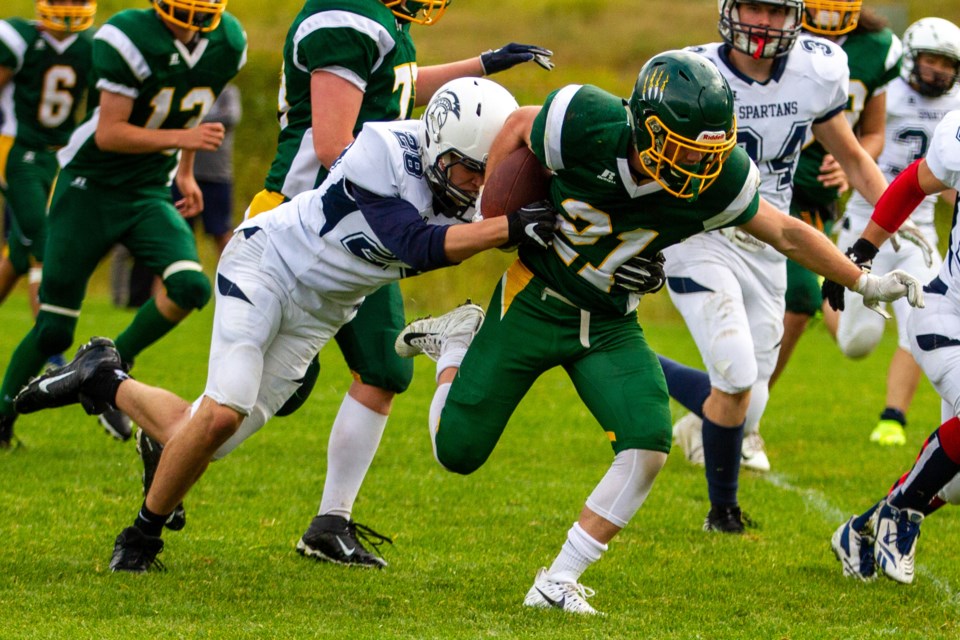 Canmore Wolverines Albert Reed breaks away from a tackle during a game against the Strathmore Spartans at Millennium Park on Friday (Sept. 20). EVAN BUHLER RMO PHOTO

CANMORE – In a gridiron rematch of last year’s southern Alberta’s championship, the W.R. Myers Rebels got the better of the Wolverines on Saturday (Sept. 28) in Taber.

The "sleep walking" Wolverines gave up three touchdowns in the first half and finished the game 24-9.

"We came out really flat," said Wolverines head coach Spencer Rose. "We dug ourselves into a hole that once again, we couldn't get out of."

Once again it was a story of two halves for the Wolverines. Canmore has struggled to find their footing in the first half this season, often times playing catch-up in the second half. They improved in the second half, scoring nine and only conceded a field goal.

Last years Tier IV provincial champs, the Wolverines have fallen to a 1-4 record. The team's only win this year was against the Olds Spartans.

On Saturday (Oct.5), the Wolverines will host the Spartans at Millennium Field for their second meeting of the season.

Rose said he will take the week to emphasize focus in practice and the importance of playing a complete game from both sides of the ball. Another priority for the Wolverines will be offensive execution and pass protection.

"I want us to come out like a house on fire and maintain that intensity for the entire game."