For the first time, the Bow Valley is hosting the 11th World Winter Transplant Games Federation as the competition makes its debut in Canada.
0
Feb 26, 2020 3:00 PM By: Jordan Small 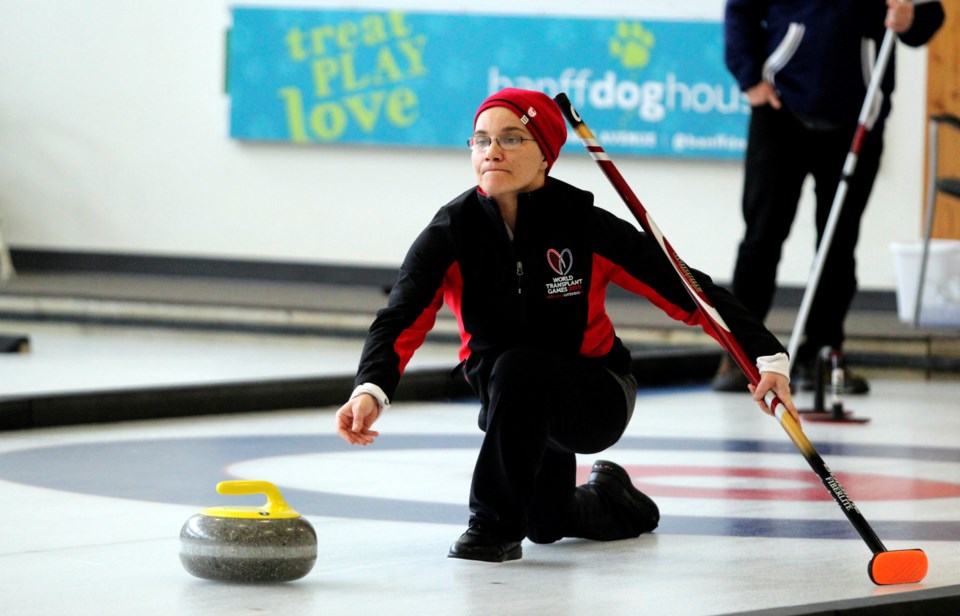 Audree Descheneaux from Quebec participates in curling at the Banff Fenlands arena on Tuesday (Feb. 25) during the 2020 World Winter Transplant Games. She received a liver transplant from an 88-year-old 16 years ago, making it 104. JORDAN SMALL RMO PHOTO

BOW VALLEY – For the first time, the Bow Valley is hosting the 11th World Winter Transplant Games Federation (WTG) as the competition makes its debut in Canada.

With over 130 athletes from 17 countries competing from Feb. 23-28, the WTG is the only international athletic competition for organ transplant recipients.

The Canadian Transplant Association is hosting the WTG, which its president and kidney transplant recipient, Brenda Brown, said is about having a second chance at life and living for another day.

“It’s all about family,” Brown said, whose daughter donated her the life-saving organ. “Our youngest participant this week is six [years old] and our oldest recipient is 77 and it’s a community, we get to meet other transplant recipients, donor families, donor family members, and living donors.”

Hosted every two years, the WTG, which also has a summer games, is associated with the International Olympic Committee (IOC). Brown said athletes are not at the Olympian level, but they follow the IOC rules when competing.

The 2020 alpine events are being held at Mt. Norquay, curling at Banff Fenlands arena, and biathlon and cross-country skiing is at the Canmore Nordic Centre.

For younger athletes, they’ll compete in the specially designed Nicholas Cup, which includes ski lessons and activities such as rock climbing and snow tubing.

The Nicholas Cup is named after Nicholas Green, a young boy from the United States who was killed in Italy and his parents donated his organs to benefit others in need.

The WTG started its Fit For Life! program, which aligns with the organization’s summer and winter games.

According to WTG, there is great importance for a transplant recipient to remain healthy and stay physically active for their donated organ’s well-being, among others.

“There’s a lot of research and medicine that has proven the healthier lifestyle you live, the longer your organ is going to survive,” Brown said. “We want one organ transplant for life and unfortunately a lot of liver and kidney [recipients] they end up with multiple transplants. Fortunately, this is my first [kidney I’ve had] for seven years and I don’t want anymore, so I’m going to be active as I possibly can to keep this one forever.”