Alex Young is eager to earn a spot on the Team Canada West roster after missing out on the team last year
Nov 27, 2019 8:36 AM By: Evan Buhler 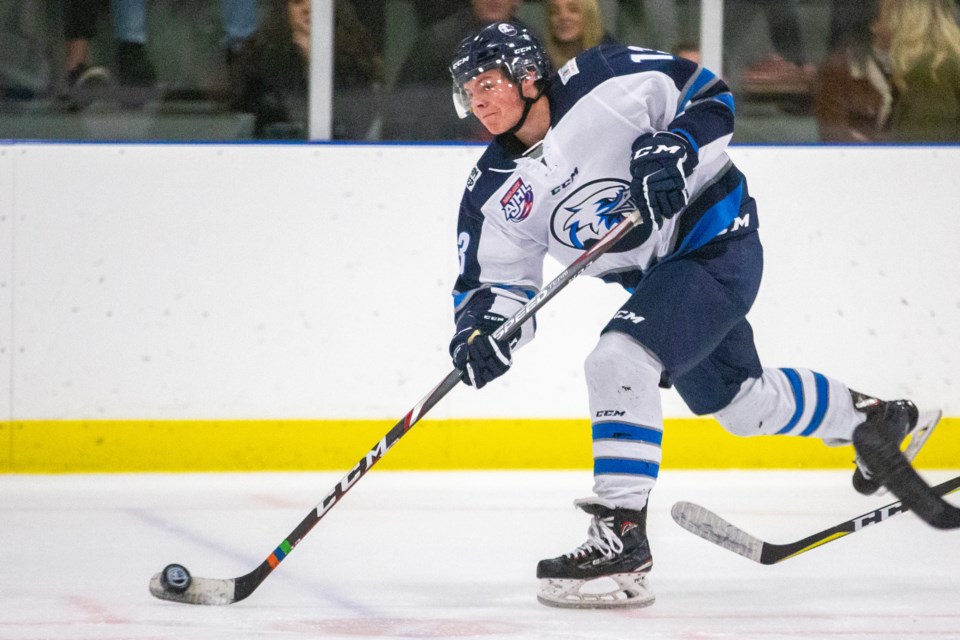 Canmore’s Alex Young is eager to earn a spot on the Team Canada West roster after missing out on the team last year. EVAN BUHLER RMO PHOTO

The 18-year-old Calgary-native has been invited to the Team Canada West selection camp in advance of the 2019 World Junior A Challenge.

“It’s definitely an honour to be invited to Team Canada West again, and tryouts are coming up here just after the weekend, so I’m excited about that,” said Young.

The camp will be held in Calgary from Dec. 1-3. With a game on Nov. 30 and Dec. 6, Young will not miss any regular season action during the camp.

“Alex is a special player. I’m glad he is invited. I think last year he felt they made a mistake when he didn’t play on the team, and I think you’ll see Alex dominate this time around – he plays better on a bigger stage,” said Eagles’ head coach Andrew Milne.

Milne also cited Young's play on the silver medal winning AJHL team at the Sirius Junior Club World Cup in Russia, as a boost to his experience.

“Alex has taken a huge step in his leadership this season and I think they will see that at the camp.”

Should Young crack the Team Canada West roster, he could miss up to five games for the Eagles. That’s five games without one of the team’s most consistent and dangerous offensive threats.

“There’s no question he’s our best player. He makes the team better, he makes individual players around him better, but we have to have the attitude in the room that it’s the next man up,” said Eagles’ assistant coach Evan McFeeters.

“Everyone will have to step up and take on a bigger role than they are used to. I think it will be good for the team as whole,” Young said about his possible absence from the Eagles’ roster.

The third-year junior player racked up six points over the Eagles’ last three games. He now sits one point behind teammate Connor Lyons, at 42 points with half of his points coming on the man advantage.

Coming off the heels of his Team Canada West invitation and a six point week, Young was also named the Canalta Hotels AJHL Player of the Week, for the second time this season.

“It’s exciting to be recognized for my effort like that and my linemate Connor Lyons deserves some of the credit for my success this year,” said Young.

McFeeters said he had been working with Team Canada since September, specifically helping out in the selection of skaters, which includes 15 AJHL players of the 44 skaters invited.

The Eagles will look to bounce back from a pair of losses to Drumheller and Okotoks.

“Our whole week has just been a crash course in defensive hockey this week. When you give up 16 goals in a weekend it’s pretty hard not to know what you have to work on,” said McFeeters.

The Eagles will take on Whitecourt and Bonneyville in a weekend double header at the Canmore Rec Centre on Friday (Nov. 29) and Saturday (Nov. 30).