Zack attack too much for Copperheads 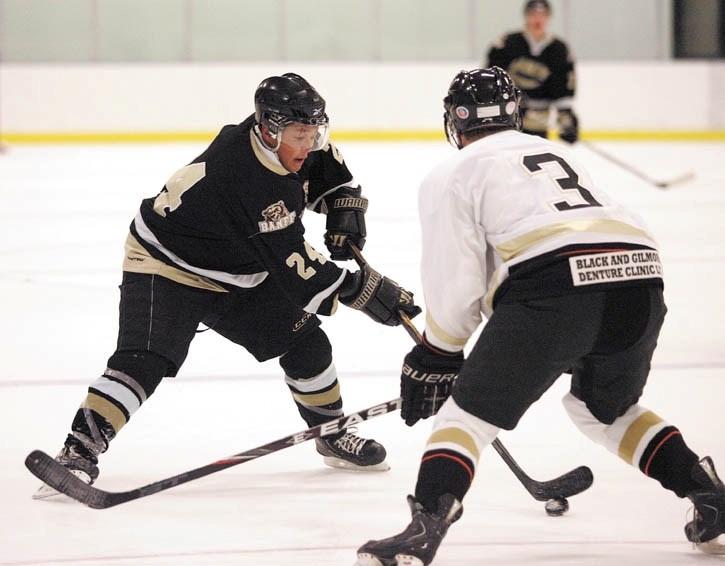 Zack Wildman puts a move on Coaldale defenseman Adam Gilmore during the Banff Hockey Academy’s 6-5 win over the Copperheads at the Fenlands Rec Centre Saturday (Nov. 12).

The Bears battled back from 4-1 and 5-3 deficits to outskate, outhustle and outscore the bruising Copperhead squad to earn the win.

Wildman exemplified the effort, as he used quick acceleration and deft stickhandling skills to get the job done for the Bears, while cutting down on his penalty minutes.

“It feels good. I had a lot of help from my brother (Colten Wildman). He just never gives up. I don’t give him enough credit out there,” Wildman said.

“I was using my speed to the advantage, their defence was a little bigger. My brother chips it up to me and I go with it,” he said.

He and his brother have been scoring at more than a point per game pace this year, often carrying the offensive load for the squad. He has 17 points and 56 penalty minutes in 15 games this season.

He gave the Bears an early lead, however, Coaldale responded with an offensive barrage, scoring four straight goals and chasing goalie Spencer Gunning from the nets. Dan Plater came in as relief, and the Bears picked up their play.

Wildman rifled a wrist shot into a gaping Coaldale net to cut the lead to two part way through the second period and followed it up with another, cashing in a rebound to make it 4-3.

Not to be outdone, Coaldale responded with a beautiful breakaway goal to make it 5-3, however, Plater shut the door from then on.

The Bears blew a glorious chance to narrow the gap with a two-man advantage in the second period, but Banff’s Yannis Soukas capitalized shortly after with a well-placed wrist shot.

The slow Coaldale defence laboured in the third, and Banff’s fitness and quickness took over.

Nick Drought tied the game for the Bears at 5-5, the defence dodged several bullets and the game was sent to overtime. It only took two minutes before Robertson, who was benched through most of the third period, finished off the comeback.

“I was a little upset about getting benched. In between the second and third period, the coach said I get one more chance and I wanted to make sure I was in the lineup for the next game,” Robertson said.

“Coming back, with the history we’ve got, is tough. I knew the longer we stayed in the game, we had a chance,” Unger said.

Although they gave up a lot of experience and size to Coaldale, Banff was quicker on the forecheck, wearing down the Copperheads’ defence.

“I don’t think their D was as mobile as other teams we’ve faced,” Unger said.

A big game from the Wildman brothers helped in that respect.

“Zack and Colten have a lot of fire. But you need to have that fire going in the right direction. There are nights they haven’t figured that out, but tonight they focused on the play rather than the physical side. You can play physical, but don’t let it get to you,” Unger said.

Penalties meant both teams played overtime with three players aside, which Unger said contributed to a thrilling finish.

“I think we should play overtime 3-on-3 in every league, including the NHL. There would be no shootouts,” Unger said.