"While no one has died yet, there have been some serious near misses and people are ignoring the no stopping signs and any attempt by Alberta Transportation to try and curb that type of activity."
Dec 9, 2020 11:46 AM By: Tanya Foubert 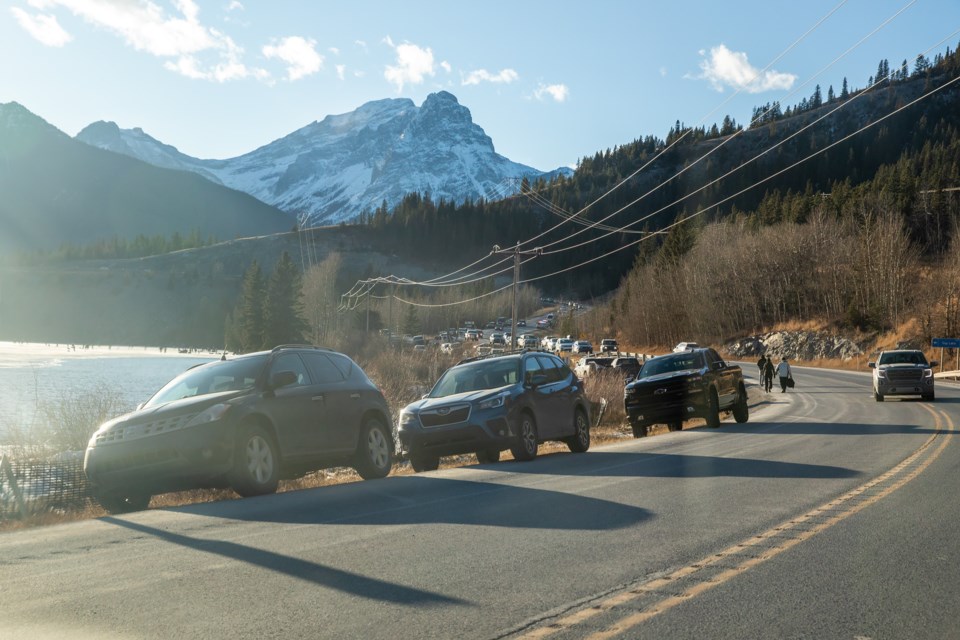 Hundreds of people flocked to Gap Lake to skate on the frozen lake on Saturday (Nov. 28). Several dozen vehicles were parked along the side of the 1A Highway, which resulted in a multi-vehicle collision in the afternoon. EVAN BUHLER RMO PHOTO

MD OF BIGHORN – Elected officials in the MD of Bighorn are concerned for public safety along the 1A Highway near Gap Lake due to a large number of Albertans flocking to the area to enjoy its spectacular outdoor skating conditions.

Gap Lake has a very small parking lot, which has resulted in drivers choosing to park along that stretch of the highway, located between Exshaw and Canmore, which is prohibited under provincial regulations.

On Tuesday (Dec. 8), Councillor Paul Ryan brought up the issue at the regular council meeting and expressed concern that it is only a matter of time until a serious, and potentially fatal, collision occurs.

"The area at Gap Lake and Grotto Pond on the 1A Highway have become incredibly popular due to some social media sites promoting it, where people like to skate on open ice," Ryan said. "There were literally hundreds of people there every weekend day for the last couple of weekends.

"This past weekend, there were dozens and dozens of people ignoring the no parking signs put up by Alberta Transportation along the 1A Highway."

According to Clayton, a westbound sport-utility vehicle (SUV) was proceeding up the hill past the entrance to the Gap Lake recreation area parking lot, when the driver made a U-turn in the middle of the highway to park on the opposite shoulder.

"As a result of the driver’s actions, another SUV had to slam on the brakes to avoid a collision," wrote Clayton in a press release. "The pickup truck behind the secondary SUV was unfortunately not able to stop in time."

The occupants of the secondary SUV were treated at the scene by EMS for injuries. The driver of the vehicle that made the U-turn was charged under the Traffic Safety Act.

It also prompted the RCMP to issue a reminder to the public that parking on highways is prohibited under the Use of Highway Rules of the Road Regulation and comes with a $162 fine.

"Over the past number of weekends, the area has seen a flood of vehicles parked along both sides of the two-lane highway as the parking lots fill up quickly and people recreate on the water at both Gap Lake and Grotto Pond," wrote Clayton.

Ryan put forward a successful motion to direct administration for the municipal district to write to Alberta Transportation and the RCMP and formally request that the rules be strictly enforced.

"Those signs were being actively ignored in the presence of law enforcement and I actually witnessed a bulk cement carrier – that weighed 80 tons – had to go around a mini-van double parked on the 1A Highway unloading passengers," he said.

"While no one has died yet, there have been some serious near misses and people are ignoring the no stopping signs and any attempt by Alberta Transportation to try and curb that type of activity."

MLA Rosin travelled to visit family in Saskatchewan over Christmas
Jan 13, 2021 10:30 AM