“The huge relief was knowing when I was at home going to bed if I woke up at three o’clock in the morning I wasn’t going to have to worry about where our horses were going to go,” said Jamieson Road rancher Sarah Rich. “Horses are super important to us.”
Nov 2, 2020 2:00 PM By: Chelsea Kemp 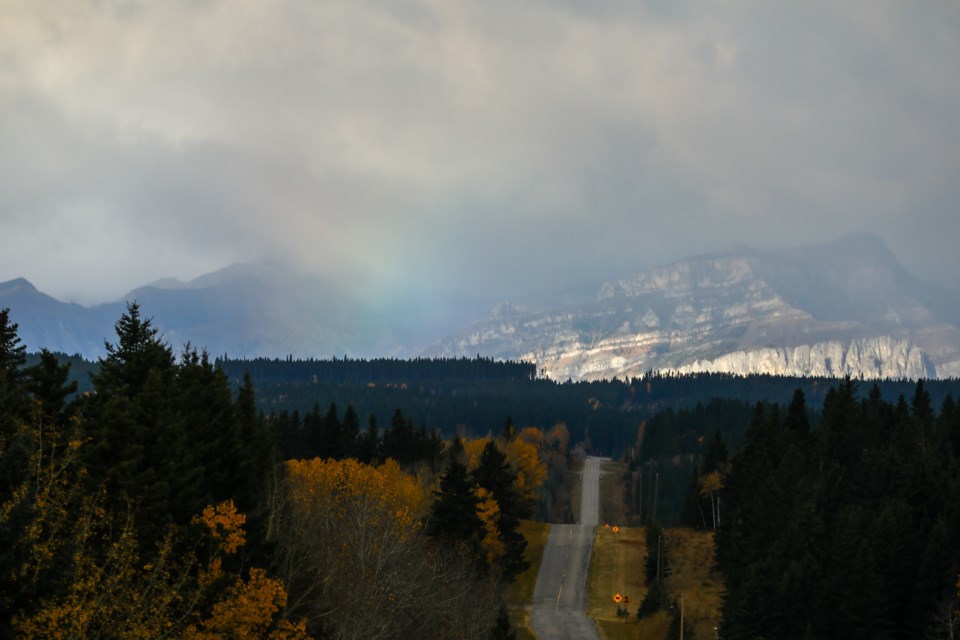 Residents living on the west arm of Jamieson Road were asked to prepare to evacuate on short notice due to the Devil's Head wildfire status changed to being out of control at the beginning of October. EVAN BUHLER RMO PHOTO

BIGHORN – A Bighorn resident is praising the Cochrane & District Agricultural Society for the support they offered during the Devil’s Head fire.

Rancher Sarah Rich lives on Jamieson Road and was one of many families on high alert during the fire. Rich owns a farm with about 180 cow-calf pairs, 80 sheep and horses.

Her chief concern was what would happen to her animals if the family was given the order to evacuate. However, hope came in the form of a Facebook post from the Cochrane & District Agricultural Society declaring they were ready to help anyone needing shelter for their animals.

“It definitely took the pressure off,” Rich said. “It was just so incredibly kind and just restored my feelings honestly in humanity and in good neighbours and community.”

When the state of emergency was officially declared on Oct. 6 in Bighorn, Rich said, and she was thankful the Ag Society was ready to take in animals.

Rich said they were told they would have 20-minutes to pack their things and escape if they received the call to evacuate.

“The huge relief was knowing when I was at home going to bed if I woke up at three o’clock in the morning I wasn’t going to have to worry about where our horses were going to go,” Rich said. “Horses are super important to us.”

The fire seemed to be contained and began to settle on Oct. 7, but the next day the winds picked up and things once again took a turn for the worse.

“Things sort of escalated and other people on the road were kind of pushing me to get it done sooner than later because my initial plan had been to just start moving the animals when the fire was closer than it was,” Rich said. “It was really scary.”

At that point, Rich said they moved the sheep, two horses and two cows to the Ag Society grounds in Cochrane.

Rich said she is especially grateful because Ag Society made them feel welcomed and supported. They even fed the horses for her and checked in to see how the family was doing with the fire.

“I was incredibly grateful for that because we still at this point had all our cows home and at that point all our sheep,” Rich said. “It was just so appreciated, I didn’t have to drive the 20-minutes or so in to get in to feed them early.”

Rich also praised Cochranite Kendra Watt who offered to find a place for her barn cats to stay safe if the family was forced to evacuate in the middle of the night. Her daughter also has geese and ducks and Watt was able to find somewhere for them to stay.

“She totally went out of her way to make arrangements,” Rich said.

In the end, Rich said, she was left filled with an amazing feeling of gratitude after the community stepped up to help keep her farm animals safe from the fire.

“The goal is to serve the community and this is a prime example of a situation where part of our community was in need,” Burwash said. “It was kind of a natural thing to put out there.”

The Ag Society is listed as an evacuation/emergency site with the Town of Cochrane, he said, and they take pride in being able to help when community members are in need.

Burwash said the Ag Society is ready to help when emergencies happen and has a barn ready to serve as a temporary home for evacuated animals.

“At any given time, we’re ready to take on various different animals,” Burwash said. “We’re fortunate to have a facility that can handle this and we’re ready on very short notice to do it.”

During the fire, the Ag Society took in approximately nine horses, 20 sheep and a couple of cattle, he said, but could have taken in more animals if there was a need.

He noted helping out fire evacuees is a more traditional role of Ag Societies and the role they play in assisting agricultural partners.

Societies have evolved to do a diverse number of community services and activities, he said, and a big part of the mission and vision now is to connect the rural community with the urban community.

“As our communities age there is less-and-less of a connection with the agricultural community,” Burwash said. “It becomes more-and-more important to recognize that we need these opportunities, or we need opportunities to try and connect our urban and rural segments.”

It is an exciting time as the society is working on its 20-year plan with Rocky View County and the Town of Cochrane to ensure they can create spaces for connection and will be looking for community input.

Burwash encouraged all community members to participate in the society's events, including the Cochrane Fair next year.

RCMP warn motorists not to park along provincial highways after collision near Gap Lake
Nov 28, 2020 6:30 PM