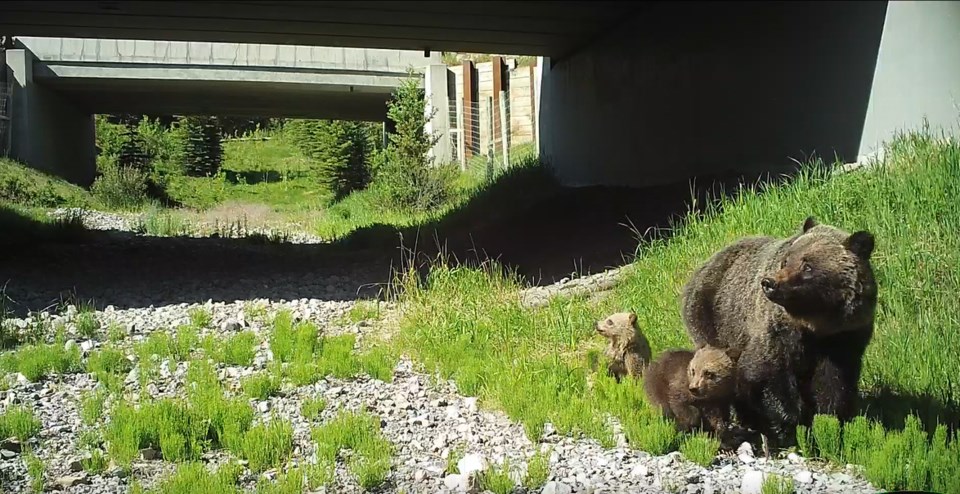 A grizzly bear with cubs is seen travelling through a wildlife underpass under the Trans-Canada Highway near Dead Man's Flats. The land shares borders with the MD of Bighorn and Town of Canmore. AEP PHOTO

BOW VALLEY – Despite the provincial government dropping the mandate for neighbouring communities to craft and approve intermunicipal development plans, the MD of Bighorn and Canmore are moving forward with the draft policy framework.

Mandated by the NDP as part of changes to Municipal Government Act, communities were required to have an official bylaw in place by 2020, designed to set the policy framework for planning matters of mutual interest including but not limited to future land use, utility servicing, environmental matters, and transportation corridors.

Since taking power after the spring Alberta election, however, the UCP government recently informed Bow Valley municipalities that their plans currently in progress were no longer mandatory.

"The current legislation creates a significant and unnecessary regulatory burden by requiring our municipalities to develop intermunicipal development plans, which then identify the kinds of development that occurs on their shared border," Minister of Municipal Affairs Kaycee Madu said in the legislature on Nov. 27 when discussing the Red Tape Reduction Implementation Act.

"These changes that we have proposed will make it easier for municipalities who share a border that doesn’t have any significant growth to not have to complete these plans, an often onerous and complex process. Again, this will save them time and money, and if that is not red tape reduction, I don’t know what that is."

However, the MD of Bighorn and the Town of Canmore councils have approved first reading of the bylaw and scheduled public hearings. Canmore's public hearing into the plan occurred Tuesday (Dec. 3). As a result, both municipalities have decided to complete the process rather than abandon it.

"We are so far along in the process at this point – my expectation is we will complete it," said Canmore Mayor John Borrowman.

"It is a fairly moderate IDP as far as they go and we have such a small shared border, there is not really too much in the IDP that is onerous."

With the draft plan focusing on natural environment and historical resources, steep creek hazards and risk mitigation, along with communication, circulation and dispute resolution, MD of Bighorn Reeve Dene Cooper also noted the draft plan is "progressing nicely" and said he does not see any reason for the document to stall out.

"The work of negotiations is ongoing and at an administration level ... [I] haven't been worried about not being able to accomplish them," Cooper said.

Sharing borders with eight municipalities, Cooper said there are only four outstanding IDPs. Those are with Rocky View County, which is completed but pending approval, Canmore, which is expected to be approved, and the summer villages of Ghost and Waiparous that are currently in discussion.

"The minister has changed some of the rules and it will benefit getting some of these things done earlier and more conveniently – the rules are good especially from the standpoint of time," Cooper said.

While IDPs are off the table in terms of a required provincial document, intermunicipal collaboration frameworks (ICF) are still required as of 2016, as legislated through the updated Municipal Government Act.

ICFs differ from IDPs in that the framework outlines integrated and strategic planning, delivery and funding of intermunicipal services, it also allocates scarce resources efficiently in the providing of local services and ensures municipalities contribute funding to services that benefit their residents.

Cooper noted that the ICF conversations with Canmore were not as advanced as the IDP conversations, but there were many long-standing agreements between the municipalities with the contracts still in place.