More blasting and less vibrations were some of the highlights at the recent Lafarge information session on Tuesday (Nov. 26), where officials revealed the quarry extension plan on the back mountain in Exshaw.
0
Nov 27, 2019 3:30 PM By: Jenna Dulewich 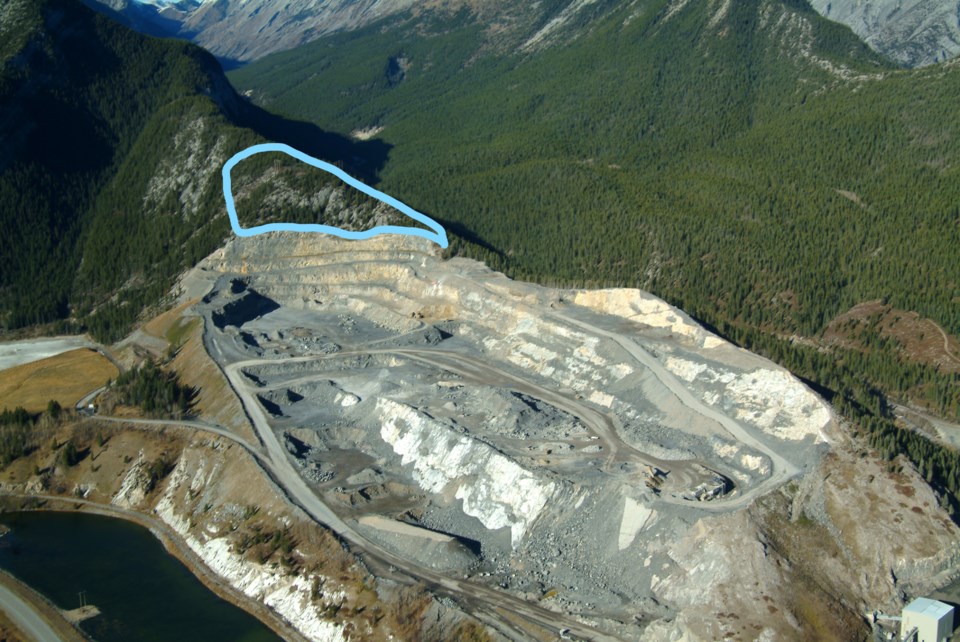 The phase II area highlighted in blue on the back mountain at the Lafarge Quarry, west of Exshaw. SUBMITTED PHOTO

BIGHORN – With only seven years of limestone reserves left at the existing quarry at current production rates, Lafarge Exshaw will be implementing phase II of its multi-year plan in 2020 to expand the quarry to help extend operations for the next 50 years.

More blasting and less vibrations were some of the highlights at the recent Lafarge information session on Tuesday (Nov. 26), where officials revealed the quarry extension plan on the back mountain in Exshaw to more than 20 community members in attendance.

The expansion will almost double the quarry, moving along the north wall and is within Lafarge's current lease lands. The project includes tree clearing, drilling, blasting, hauling and excavating north of the quarry along the ridgeline.

At the information session, mining engineer Dylan Treadwell answered community concerns saying rehabilitation and restoration work is continuous, East Exshaw Creek access will be restricted during the blasts, trees cut from tree clearing can potentially be sold for firewood and no, there will not be any impacts to mountain bike trails.

While they will be blasting everyday, the engineer said he is hopeful to keep the closures to half an hour to ensure any falling rocks are not a safety concern for those using the trail.

“We will restrict access, check it out and open it again,” he said.

When asked about how the project will impact the ridgeline, he replied that it would not.

Construction work will be on the west of the ridge, ensuring ridge separation for residents in Exshaw.

“This [project] is starting next year and we want people to be informed. It will look different and we want to be collaborative and work with residents,” Treadwell said.

The expansion is not expected to change the production rate, but rather keep it at the 2.5 mil tonnes of rock each year the company has extracted for its industrial operations over the past three years.

Treadwell explained the environmental impacts including vibration, dust and noise.

Changing from the traditional big blasts, Treadwell explained there will be more blasting for the first four months of the project, but in smaller blasts.

Typically a production blast will contain upwards of 50 holes, but the proposed blasts will be significantly reduced with an estimated five to 10 holes that are less deep, meaning ground vibrations and less impact.

Treadwell also explained concerns about dust would also be addressed by delaying blasts if winds are blowing towards the community and utilizing the water trucks on the haul road.

In the Exshaw plant newsletter, it was also noted that Lafarge personnel are trialing a new dust suppressant on the roads and are hopeful to use it in the warmer months.

As for noise, engineers are planning to use a design to minimize noise while also investigating all options to reduce noise effects.

An area resident asked if the contractors would be using a tap drill, as it was used previously in construction and created an “annoying” noise for residents.

The engineer said at this stage they were not aware of any tap drill that would be used for the project and based on the conversations he was having with contractors, it sounded unlikely tap drills would be used.

“We want to award [the contract] by the end of the year and start work early next year,” Treadwell said.

Contractor submissions for the expansion project are due Dec. 6 with tree clearing for the project expected to start early next year and construction projected to start April or May.

For anyone who missed the meeting, Lafarge officials are encouraging residents to reach out with any questions or concerns by phone at 403-673-5220 or by email at Info. Exshaw@lafargeholcim.com.