Due to rising groundwater levels, wastewater is being pumped into the Bow River to keep it out of residents' basements in lower Exshaw
Jun 4, 2020 9:25 PM By: Cathy Ellis 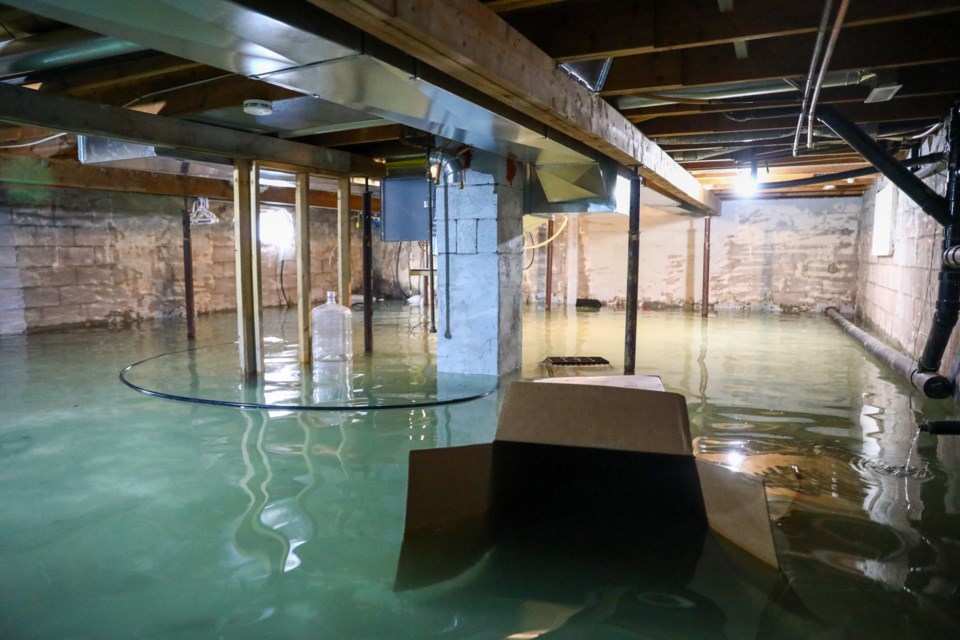 The basement of Exshaw residents Brent Peters and Vicki Fleetwood has been flooded with more than 14 inches of water on Tuesday (June 2). Peters said water continues to flow into the basement, and expects the room to flood completely within a few days. Flooding issues started more than 10 days ago and more than 25 homes have been affected in the hamlet. EVAN BUHLER RMO PHOTO⁠

EXSHAW – Wastewater is being pumped into the Bow River in Exshaw to keep it from backing up in residents’ basements.

According to the MD of Bighorn, wastewater collection systems at the east lift station, and at the wastewater lagoon, are experiencing extreme volumes and cannot keep up to all the flow due to rising groundwater levels.

Al Hogarth, the MD's utilities foreman, said that to prevent wastewater from backing up into residents' basements in lower Exshaw, AEP has given approval to pump wastewater from the lift station into the culvert under Highway 1A, and ultimately into the Bow River.

“We are also discharging from the wastewater lagoon to the Bow River,” Hogarth said in a website post Thursday evening (June 4).

“Although the wastewater that we are pumping is diluted with large volumes of groundwater, we are recommending that residents on a private well boil their water prior to consumption,” he added.

“As per Alberta Environment and Parks, the wastewater release will be tested throughout this event.”

Dozens of Exshaw residents have been pumping thousands of litres of water out of their basements this week as significant levels of groundwater have flooded the hamlet.

According to the Alberta government when a boil water advisory is in effect:

To make you water safe to drink:

For more information on boil water advisories, go to https://myhealth.alberta.ca/Alberta/Pages/Boil-water-advisory-how-to-use-water-safely.aspx.