"People think they are in a park, when they are actually in an industrial corridor and those two things when they come together have some potentially catastrophic consequences," said MD of Bighorn Councillor Paul Ryan.
Jul 16, 2020 12:00 PM By: Tanya Foubert 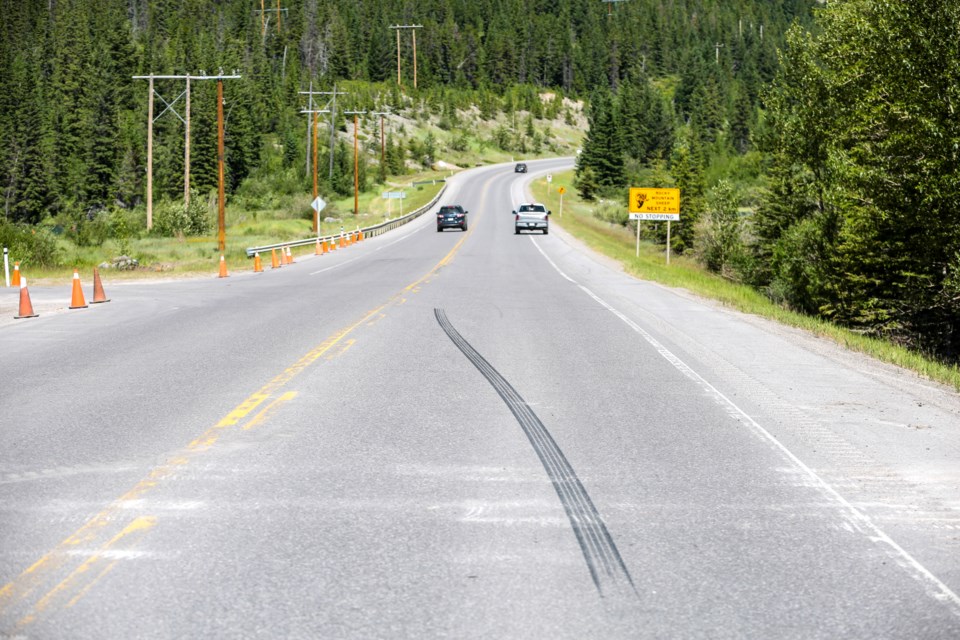 A skid mark left from a tire along Highway 1A near the Grotto Pond exit on Tuesday (July 14). EVAN BUHLER RMO PHOTO⁠

So popular, that elected officials in the MD of Bighorn are looking at ways to manage the situation before someone is seriously hurt or killed along Highway 1A.

Councillor Paul Ryan said his concerns for public safety along the stretch of highway between Highway 1X and the Graymont quarry over the weekend led him to call the RCMP.

“I have spoken to the RCMP about it and made a formal complaint,” he said Tuesday (July 14) during a Bighorn council meeting.

“The amount of people that have discovered the public use areas along that stretch of highway are no doubt enjoying it. I live here and I love it, but there needs to be some sort of regulation that will help it make sense.”

Regional visitation to the recreational amenities along Highway 1A, including the Yamnuska day use area and trail, has intensified this season due to COVID-19. Albertans have been taking advantage of the world-class outdoor offerings in record numbers.

But this has led to vehicles being parked along highways when parking lots fill up in Kananaskis Country. In addition to issues along Highway 1A, trailheads at Grassi Lakes and Goat Creek were inundated over the weekend.

Ryan said he is concerned that many recreational visitors parking on the 1A through the MD Bighorn near Exshaw do not realize it is an industrial transportation corridor.

“People think they are in a park, when they are actually in an industrial corridor and those two things when they come together have some potentially catastrophic consequences,” he said.

Several industrial operations and quarries are situated on the 1A, including Lafarge, Graymont, Baymag and Burnco. Ryan said 90-ton rock-filled semi-trucks travel up and down the 90 km/h highway on a regular basis.

“People should not be putting their own lives and their family’s lives at risk looking for a hiking opportunity,” he said.

For Bighorn Reeve Dene Cooper, it is a serious situation that could end tragically unless something is done.

A sub-committee of the Bighorn Corridor Environmental Committee is set to meet at the end of August to discuss the issue, which would include industrial stakeholders, RCMP, Alberta Transportation and municipal officials.

“The industrial triangle is considered the highest and best use of that land and we have tolerated, allowed and even facilitated some points where the pubic can park and enter into the mountainsides and valleys next to the Bow River along the 1A Highway,” Cooper said. “But we have to be very careful we do not encourage people to get out on the highway, or trespass across those active quarries.

Under the Traffic Safety Act, it is prohibited to park on the shoulder of a highway in Alberta unless it is an emergency, according to Canmore RCMP Sgt. Stan Andronyk. Motorists could be hit with a $162 fine.

“The Canmore RCMP detachment will work closely with the MD of Bighorn and the province of Alberta to keep motorists and pedestrians safe in areas surrounding popular day use parking lots,” Andronyk said.

“Many motorists may not be aware that it is illegal to park on the shoulder of a highway, and the hazards this choice can create for pedestrians and motorists alike.”

Bighorn council approves re-zoning for the Crossing at Ghost River
Aug 4, 2020 9:35 AM