With its generous helping of blood, gore and absurd humour, the single-panel comics of Alberta cartoonist Derek Evernden can only be described as where The Far Side meets the dark side.
Mar 28, 2019 12:00 AM By: Rob Alexander 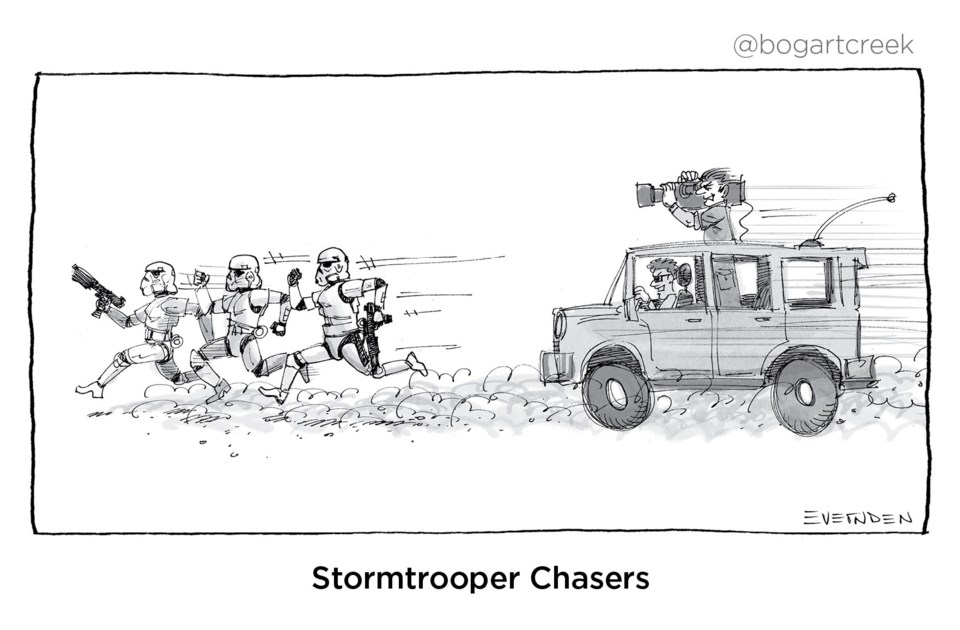 With its generous helping of blood, gore and absurd humour, the single-panel comics of Alberta cartoonist Derek Evernden can only be described as where The Far Side meets the dark side.

“Some of them are pretty dark; absolutely, I can’t deny that,” Evernden said with a laugh when describing Bogart Creek, the collection of his best single-panel comics and the latest publication from Canmore-based Renegade Arts Entertainment.

While some of Evernden’s comics are dark enough to please Darth Vader, they are thankfully much funnier than the dark lord of the Sith and for that readers – and Evernden – have The Far Side creator Gary Larson to thank.

The Far Side, which Larson retired on Jan. 1, 1995, is still recognized as one of the top syndicated comics of all time and it’s dark, absurd humour continues to have a huge influence on Evernden and his work.

“I’ve got Gary Larson in the acknowledgments because you can’t ignore his influence, and it wouldn’t be fair for me to do so because it’s buried in my sub-conscious. I’m constantly on red alert wondering if any jokes I come up with are ones that I had been reading as a kid,” Evernden said recently from his home in Milo, a village east of High River.

“For its time, it was pretty dark,” said Evernden. “You’ve got Jiminy Cricket in a mason jar full of formaldehyde. You’ve got snakes eating (a baby). Now looking at it, it’s almost quaint. The humour is still twisted, dark and demented, but nonetheless through all of that it wasn’t just for shock value, it really spoke to the human condition and that was (Larson’s) gift.”

Like Larson, Evernden’s humour is twisted, dark and demented, and at the darker end of the spectrum is Evernden’s take on the chestbursters; the horrific infant xenomorphs from the Alien movies.

Instead of popping out of its victim’s chest, Evernden’s chestburster has gone the other direction and finds itself sitting in a blood-spattered toilet looking down at the legs of its victim saying, “So that’s why they tell you to come out the chest.”

And like his hero, Evernden likes his darkness rather than just shock to speak to – or rather skewer – the human condition in all its idiocy.

“There are some common themes that I adhere to in Bogart Creek; I avoid being overtly political, but I like taking satirical shots at machismo, the wealthy and our species’ strained relationship with non-human ‘nature.’ In that last point in particular, I feel a definite alignment with The Far Side,” he said.

A great example of that is a panel that features a bulldozer knocking down a stand of evergreen trees beyond a sign that reads “Evergreen Estates.”

Bogart Creek comics are also light and silly and that is when Evernden is at his absurd best.

Included in those are the delightfully absurd “Viking Tube Raiders,” which features a group of Vikings floating down a placid stream on innertubes as they wave their torches and axes, and “Stormtrooper Chasers,” which depicts weather chasers in hot pursuit of a trio of stormtroopers.

Evernden began to develop his own sense of whimsy drawing caricatures in Toronto’s Ontario Place in the 1990s.

It proved to be the ideal training ground for a budding cartoonist, as it helped him to hone his skills as an artist, a satirist and comedian.

“I would sit there, and I would see everybody as caricatures of themselves,” he said, “but the biggest thing is that I’m also a human being and just as messed up as everybody else. I tried to embrace that, and I think that is what these comics are for me, looking directly at the worst aspects of ourselves and trying to find some sort of silver lining in it.”

The caricature work later led to political cartoons, but the election of Donald Trump as American president led Evernden down paths that while dark, were not funny, but that at least led to Bogart Creek, which incidentally is named after a creek in Newmarket, Ont.

“After Trump was elected I found it too depressing,” he said. “That’s when Bogart Creek was born – I found it liberating to create jokes for their own sake, not as reactions to whatever that mad man did or said on a daily basis. Honestly, for all the darkness in Bogart Creek’s humour, I don’t feel it comes anywhere near what I see when I read the news.”

Bogart Creek is rated mature. It is available for $19.99 at Café Books and Stonewaters Home Elements in Canmore.