An endearing ode to Canadian art 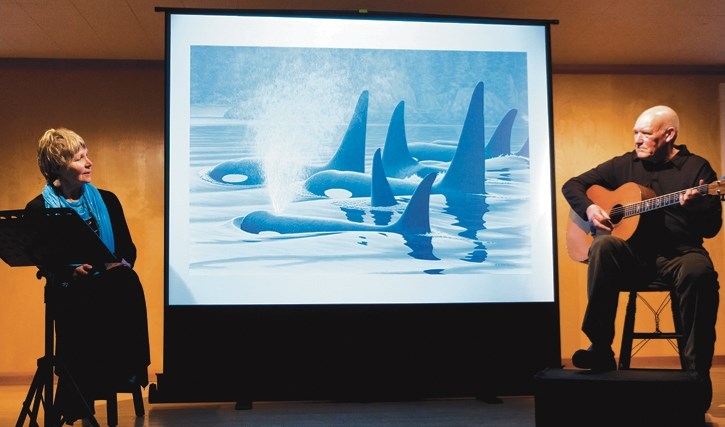 Their recent production A Northern Tapestry: A Lost World does just that by offering audiences an evening of original music coinciding with Canadian artwork produced by the county’s most famous artists, photographers, poets and writers.

Noble is responsible for crafting the production’s original songs, along with performing during the show, while Shillingford provides narration. The production is described as a glimpse into Canada’s soul, showcasing some of Canada’s most celebrated artists and photographers, with 401 projected images.

“We’ve invited our contributing artists to come to one of our national shows if it’s near where they’re based, and we have three coming to the Canmore show. We’re happy to have Dan Hudson, Patrick Markle and Mike Vincent coming to the show,” Noble said.

“Funnily enough, the first image in the show is by Calgary-based photographer Robert Berdan and, funnily enough, it is of the Rocky Mountains near Canmore with the Rockies covered in snow – that’s the very first image, so then we take it from there.”

The endeavour took three to four years for the production to take shape, with one of the longest processes involving getting permission to include the artwork in the show.

With over 100 artists and photographers represented, you have to deal with their estates or representatives, leaving Shillingford the heady task of contacting and seeking permission to use the art involved.

“The idea came along and then we thought what is the best way to approach this. Then we took the songs as a base to put the images around what was already in the songs or the spoken word that we wanted to use,” Noble said.

“We also wanted to include First Nations content as well, with John Bear, Charles Pack, Victoria Buffalo Robe, Michael Robinson and Joe Louis,” said Noble. “We wanted to include all of these voices, then we tailor towards these images and we’ve heard from audiences that they enjoy it and appreciate that we’ve been able to tie this whole thing together and tell a story in these different forms that we use.”

The two found various themes, but the main theme is basically the interaction of the Canadian landscape and Canadians and the connection to the land through the art and their music and their words; basically a celebration of the country and looking at it through the eyes of an explorer, a fisherman, a photographer, an artist, a farmer and First Nation citizen.

“It’s been massive, but it’s been absolutely a fabulous process and we’ve enjoyed every minute of it,” Noble said. “Our small theatre company, called Whistling Fish Productions, formed in Nova Scotia in 1997, and we gave ourselves a mandate of doing purely nothing but new Canadian works and we’ve stuck with that mandate even though it has been difficult and challenging.

“But we’ve done that through writing all of the songs and Susan doing the majority of the work collecting the narrative and photography and getting the permissions for a full joint effort – it’s been an uplifting and exciting experience.”