Two young Hamilton rock bands – Arkells and San Sebastian – will take to the stage at Wild Bill’s, Wednesday (Nov. 16). Both are heading west across the country, promoting new albums.
Nov 10, 2011 12:00 AM By: Rocky Mountain Outlook 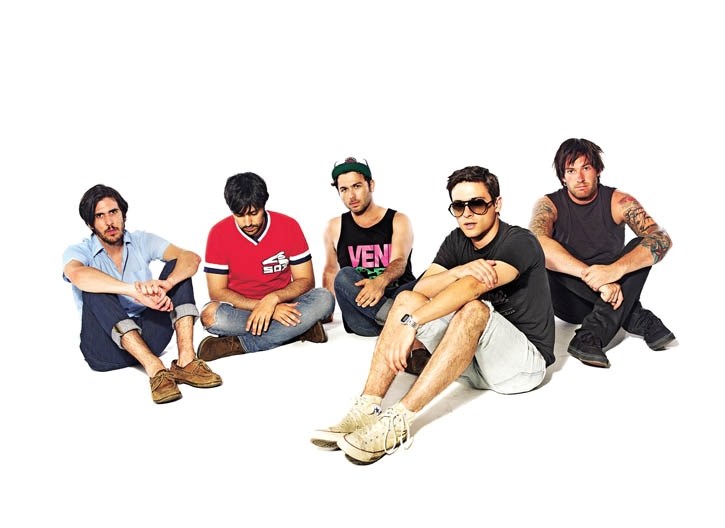 Both are heading west across the country, promoting new albums.

Max Kerman, who sings and plays guitar with the band, spoke on behalf of Arkells.

“We’re in the beginning stages of the tour, but so far, so good,” he said. “We’ve never played Banff or Canmore, but we specifically asked about it, because I’ve heard the shows at Wild Bill’s are pretty fun – the guys in the Sam Roberts band have played there before and they say its a really good time.”

“It just came out a couple of weeks ago, it’s exciting for us because we’ve been sitting on the songs for a while, and it’s been a real natural growth since our first record three years ago,” said Kerman. “On this one we wanted to keep some things the same, but we also wanted to experiment a little more in the studio and try new sounds. That’s probably the main difference between this record and the last.

“It’s very collaborative. We usually start with a very bare bones idea, with me, and from there the band takes it over and it usually ends up sounding very different from what it started out as.”

Their first record, Jackson Square, earned them a Juno award for New Group of the Year. The new album is primarily about relationships, said Kerman.

“There’s a lot of different songs about relationships – and all kinds of relationships – whether it’s with an old friend, your dad, with your girlfriend,” he explained. “We’re interested in telling stories and I think a lot of the songs are about a certain place or the name of the person or a particular circumstance.”

Ultimately, they are storytellers, he said.

“My favourite pop music is when you’re able to tell an interesting story that’s a little quirky… something that’s fun to move to and sing along to, and if you can get that combination, you’ve probably written a meaningful song that will connect to people.”

Arkells are self-described as being a straight up rock band, in the same genre as bands like Tokyo Police Club and Alexisonfire.

“We’re definitely a rock ‘n’ roll band – instrumentally it’s a traditional setup,” said Kerman. “This record definitely takes from influences like Spoons and Phoenix and older stuff like Fleetwood Mac. On this record those influences are quite prominent.”

Touring with Arkells are two other bands, San Sebastian and Rich Aucoin, though only San Sebastian will play the show at Wild Bill’s.

San Sebastian, also from Hamilton, offer a sound that will complement their tourmates.

“They’re neighbours of ours in Hamilton,” said Kerman. “There’s a lot of great music and bands in Hamilton, and we’re happy to be able to take our friends with us.”

“We’re good friends with Arkells – it’s more like a friend tour,” he said. “They asked if we wanted to go on tour with them, and we couldn’t have been happier.

“We love everything, they have great musicians and songwriters, and they’re probably one of the best live bands in Canada.”

He too noted the band is anxious to play Wild Bill’s.

“We just did a tour in September across the country, and then we did one about a year before, good times, but no, we haven’t been to Banff or Canmore yet,” said Veerman. “We’re excited, we hear a lot of good things about Wild Bill’s.

“It’s fun to play new places and check out the lay of the land, and we’ve had a good start to the tour. We like driving through northern Canada, it gets pretty beautiful in the fall.”

San Sebastian is a five-member band which includes two sets of brothers. Veerman is joined by his brother Mike on lead vocals, while Sean and Brodie Dawson both play guitars. The band is rounded out by Ted Paterson on drums.

“We met each other while playing in separate bands in Hamilton, and so we decided to start a Hamilton super group – in our own minds, anyway,” said Veerman. “It’s good, it helps, if there’s any in-band fighting, the brothers will fight each other, there’s never any cross-brother fights.”

The band is all about good times though, and good ol’ rock ‘n’ roll, he said.

“We like to think of it as indie pop rock,” said Veerman. “Guys and guitars, guitars and drums, and some singing – just rock ‘n’roll.”

Formed in 2008, San Sebastian rose in popularity last year, when they made Much Music reality TV show disBAND, after which they were signed to Universal. Just over a month ago, they released Relations, their first full-length album.

“We’re pretty excited about it, we worked some Canadian rock legends on it – Grey Nori and Jose Miguel Contreras of Treble Charger and By Divine Right,” said Veerman. “They’re such great guys, they helped a lot and so far we’re hearing great feedback about it.”

San Sebastian writes music as a group, without any one dominant member, he explained.

“The original idea for a song will come from any one of us, and then they’ll bring the idea to a practice and we’ll collaborate on it,” he said. “We write most of our songs as the five of us in a room together, we’ll work out the parts and it’s definitely a joint effort, we’ve all got our fingers in there.”

After playing Banff, the bands head east for the journey home.