“Now you see why I love coming to places like this,” said artist Jan Kabatoff as we each fired off another dozen shots on our cameras.
Sep 15, 2011 12:00 AM By: Rocky Mountain Outlook 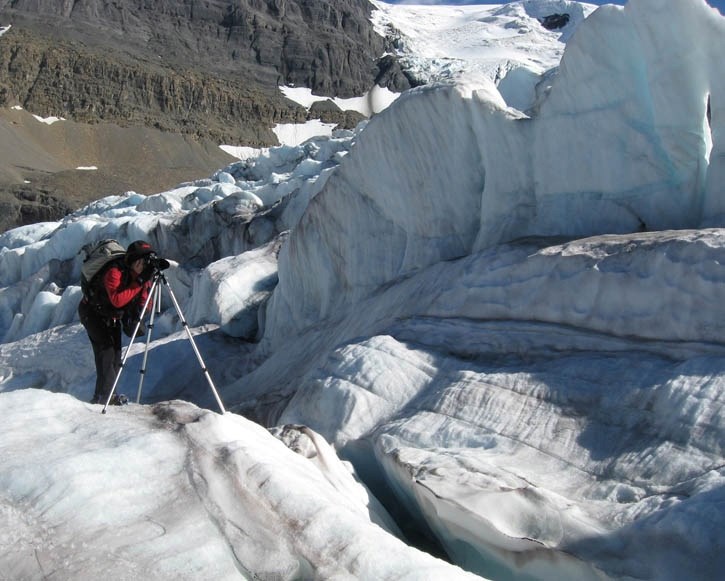 Artist Jan Kabatoff trains her lens on the fascinating features of an icefall on the Athabasca Glacier to capture images for her ongoing exhibit on glaciers.

“Now you see why I love coming to places like this,” said artist Jan Kabatoff as we each fired off another dozen shots on our cameras.

Six hours after hiking onto Athabasca Glacier, the early evening light was soft and muted, casting a gentle glow on a serpentine stream of water coursing along the twisting groove it had worn into the ice surface as it raced toward the glacier’s toe. Pale blue, the stream was framed by a border of white slushy textured ice, which in turn was surrounded by a field of ice covered with brown sugar-like rock dust.

I had to agree. Like Kabatoff, I too love exploring glaciers up close, whether en route to climbing a summit, skiing untracked powder blanketing the ice, or, as we were on that day, walking slowly for a long afternoon just to take photos.

Kabatoff, however, did not discover glaciers from a mountaineer’s perspective, but rather from that of a trained artist who learned to walk in crampons so she could peer down into swirling millwells and study crystal clear cylindrical cryoconite holes cradling clusters of black dots, the result of rocks on the ice conducting more of the sun’s heat and melting down at a faster rate than rest of the ice.

“It’s the compositions that I see in nature that are so stunningly beautiful that it’s hard to replicate as an artist, as a painter,” she continued. “The best I can do is to take the best photographs I can to capture it.”

Kabatoff’s photographs, however, are just the beginning. Back in her studio as artist in residence at the Banff Centre, she creates three-dimensional installations and encaustic – melted wax mixed with pigments – paintings inspired by the natural beauty she sees in the ice’s myriad formations; sunlight glinting through a slit melted in a standing sheet of ice, a perfect bird’s beak sculpted out of ice by wind and sunlight, charcoal etchings sprayed by wind-blown rock dust.

A West Kootenay native who moved to Alberta in 1972, Kabatoff’s first experience on a glacier happened in 2010, on a creative outing with photographer Roy Anderson. While he was trying to impart the fundamentals of composition and landscape photography, she was focussing on the minutiae of the glacier.

“That is when I absolutely fell in love with the glacier,” Kabatoff gushed. “I was leaning into millwells, falling in love. It’s a wonder I didn’t fall in head first! I was awestruck.”

Having raised her family on an acreage in Bragg Creek, where she ran the Two Pine Gallery for three years in the 1980s, Kabatoff’s art has always been inspired by the natural world. But when she moved to Canmore in 2000, she was awakened to a new way of seeing wilderness.

When in 2004, Kabatoff sold her condo to mountain guide Helen Sovdat, Sovdat noticed one of Kabatoff’s botanical prints hanging on the wall and suggested throwing one in to sweeten the deal. In turn, Kabatoff suggested trading a print for Sovdat’s guiding services.

Before setting out with Sovdat however, Kabatoff experienced her first technical mountain adventure with alpine guide Sharon Wood (another collector of her botanical prints), who led her on a rope across challenging terrain in B.C.’s Bugaboos.

“It was my first time walking across a talus field, being roped up, walking in crampons,” Kabatoff said. “What was I doing being cramponed up a glacier? I was a fair weather day hiker. It was exhilarating and frightening at the same time. Then when we hit the ridge and I looked across to the (Bugaboo) glacier, I was moved to tears. It looked like the womb of Mother Earth. And I thought about how we are not respecting the glaciers or the water the glaciers are storing for us.”

The experience, she said, led her to feel that she had a calling to create art that would encourage people to think about glaciers. In 2007, she joined Sovdat on a trip to Mongolia, and while Sovdat led three others up a mountain, Kabatoff stayed at a lower camp with other hikers, creating art. While there she met a glaciologist who told her the glacier he was studying was shrinking – not just retreating, but shrinking overall – at a rate of six metres annually. Spurred on, she travelled to the Yukon for a two-month artist residency, where she joined a week-long rafting trip on the Alsek River and where, while flying over the Kuskawalsh Glacier in a Cessna, she succumbed to air sickness.

“I really have suffered for my art,” Kabatoff joked.

In 2009, she travelled to Patagonia with Sovdat, collecting more images and inspiration toward her multi-media show, Glacier: A Journey, which opened at the Whyte Museum that fall.

Two years later, Kabatoff sees her work as not nearly done, spending several day this summer walking in crampons, tolerating knee-wobbling winds and finger-numbing cold in the middle of August with Sovdat guiding her on the Athabasca Glacier, taking the photos that will inspire pieces for her show, which continues to travel.

“The only way you can truly appreciate what nature has to offer is to spend a day being intimate with it. To really know a place, you have to immerse yourself. Let it hurt you, inspire you, motivate you,” Kabatoff said.

“Glaciers are special entities. They’re extremely important to water reserves on the planet and science is telling us they are shrinking very rapidly due to climate change. As an artist, I’m trying to bring certain aspects of the glacier to light.

“I hope people will fall in love with the beauty as I have and inspire them to be more protective and want to work harder to find alternative energy sources. I feel it’s my duty as a global citizen to do my part in some way.”