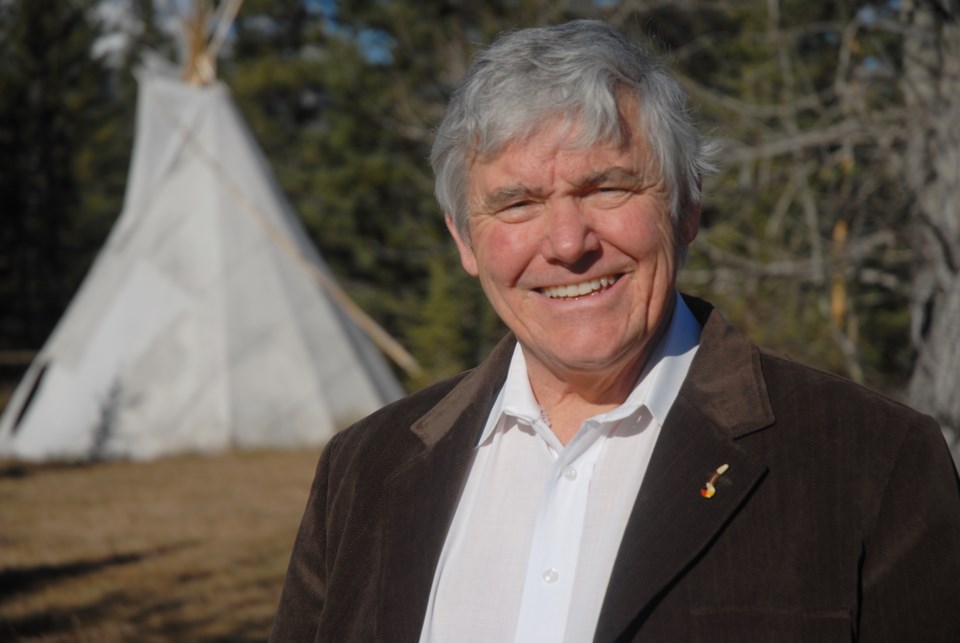 Retired provincial court judge and author John Reilly has published his third book in a trilogy that examines the criminal justice system as it related to Indigenous people. BOB SANDFORD PHOTO

CANMORE – Not all good ideas are hatched in the pub, but more than a few are watered there as they begin to grow.

“I owe this all to Bob Sandford, who suggested I write a book back in May of 2009,” former provincial circuit court judge John Reilly said of the beginnings of his trilogy that examines criminal justice and how it relates to Indigenous people in Canada.

“He did it quite facetiously at the Georgetown Institute. He said, ‘you know Judge Reilly, this is a literary club, and if you want to be a member you’re going to have to publish.’ And of course, it’s just a group of guys that drink beer.”

The Institute is a casual social club that gathers regularly at the Georgetown Inn in Canmore to discuss big ideas over a pint. They sometimes jokingly refer to themselves as drinkers with a thinking problem.

But clearly, the idea for his first book, Bad Medicine: A Judge’s Struggle for Justice in a First Nations Community was already there in nascent form, it was the overwhelming scope of a book project made it difficult for Reilly to get started.

When pressed by Sandford about what he wanted to write, Reilly said, “Well, I’d like to write about my experiences with the Stoney First Nation, my fight with the government, and my changed view of the law.”

One book was suddenly three, and introductions were made with the publisher at Rocky Mountain Books, Don Gorman.

When Bad Medicine was released in 2010 it made an immediate impact. The Canadian bestseller sparked controversy and drew praise across the country for exposing tribal corruption on the Stoney reserve.

In the follow up, Bad Judgment: The Myths of First Nations Equality and Judicial Independence in Canada, Reilly tackles the failures of the legal system as it relates to First Nation peoples.

“The second book tells of my conflict,” Reilly said, “with the Chief Judge’s Office and the Government of Alberta and the Department of Indian Affairs, because I was criticizing everybody about their mishandling of Aboriginal affairs.

“My Chief Judge had told me I had lost my objectivity with Aboriginal offenders and ordered me moved out of Canmore.”

A judicial review of that order was set in motion, and Judge Reilly was ultimately able to remain on the bench in Canmore, where he continued to use his powers as a jurist to try and reshape attitudes toward Indigenous people and examine the true meaning of justice. But, it was not an easy time.

“We lived with a lot of tension during the years of conflict with the Chief Judge,” Reilly said.

The final instalment of the trilogy, Bad Law: Rethinking Justice for a Postcolonial Canada is a summation of his journey to becoming a better public servant by actually learning about the people who appeared before him in court. That journey has led to some profound realizations.

“The white man sees a wrongdoer as a bad person who needs to be punished, the Indigenous people see wrongdoing as ignorance in need of teaching, or illness in need of healing. I think that that is a much more enlightened way of dealing with wrongdoing.”

The book launch for Bad Law: Rethinking Justice for a Postcolonial Canada is Wednesday (Nov. 6) at 6:30 p.m., at the Georgetown Inn in Canmore. Judge Reilly will also be the keynote author at the National Restorative Justice Symposium on Nov. 17, at the Banff Park Lodge Resort and Hotel in Banff.

All three of Reilly’s books are all available through Rocky Mountain Books at rmbooks.com and Café Books in Canmore.