BANFF – The common phrase “many hands make light work” is being applied to an environmental initiative in Banff that’s trying to keep Sulphur Mountain as clean as possible – both for the environment and for the wildlife that lives in it.
May 23, 2019 12:47 AM By: Alana MacLeod 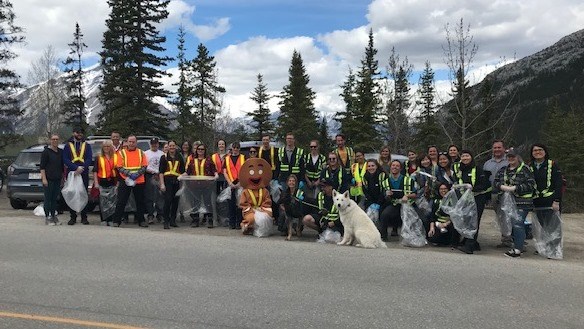 A group poses together after the first official Sulphur Mountain Green Collective clean up.

BANFF – The common phrase “many hands make light work” is being applied to an environmental initiative in Banff that’s trying to keep Sulphur Mountain as clean as possible – both for the environment and for the wildlife that lives in it.

Blossoming out of a shared sense of responsibility for maintaining the beauty of the mountain is a partnership between three businesses – the Rimrock Resort, Banff Gondola and the Upper Hot Springs – uniting as one to clean the area tourists are attracted to by all three businesses.

“We figure it’s our responsibility – we’re the reason that people are up there to begin with so it should be our responsibility to make sure it’s cleaned up,” said Bree Todd, executive assistant at the Rimrock Resort as well as its green team chair.

The group called The Sulphur Mountain Green Collective ran its first clean up on May 15, picking up litter from the Gondola all the way down Middle Springs Drive.

“When we got together there was over 40 of us and we were able to spread out and do a really good deep thorough clean of areas that we know tourists and locals frequent all the time,” said Todd.

Ceara Maguire, the operations coordinator for the Banff Gondola, said she thinks businesses in the national park should be setting the bar environmentally.

“We’re all part of the same destination, the same experience, we should be on the same page … We should really be setting the standard for eco tourism,” she said.

In line with the collaboration concept, Todd and Maguire, along with a volunteer whom also works at the Banff Gondola, Mary Carlucci, interviewed together. Sitting at a café downtown Banff, the Outlook asked the trio what the most common waste item found around the hill has been.

“We did a clean up of the lift line and we found that people are throwing diapers out of gondola windows, which is just shocking.”

“Yeah – sometimes you can just smell them but you can’t find them,” added Todd.

The group said their findings were particularly disheartening because of potential effects it can have on surrounding wildlife.

“I think knowing the dramatic consequences here hits you a lot harder than in a city or anywhere else when you know that your actions could directly affect the livelihood of an animal,” said Maguire.

“Knowing that if a person left food out that could be the reason that a bear dies or that a wolf doesn’t learn to hunt.”

Since it was reported in late March that the animals were resurfacing in the mountains, a black bear in Canmore has already been killed. The bear, who was relocated last August for getting into garbage in the same neighbourhood, returned this year to the area where it got the food reward. Fish and Wildlife officers captured killed the black bear on May 2.

“Ever since I came here, there’s such a big emphasis on ‘don’t leave your trash on the ground’ and just always trying to be mindful of the animals around you,” said Carlucci, who moved to Banff from Toronto.

Todd chimed in with similar sentiments.

“It’s terrible for our wildlife, our wildlife builds nests with [cigarette butts] and you know it’s very far reaching,” she said.

The Sulphur Mountain Green Collective plans on doing another clean in July and September. They’re hoping their initiative will help encourage other businesses to collaborate as well.

“I’d like other businesses to adopt or at least look into working together collaboratively and with businesses, as opposed to just thinking of everyone as competition, to work together and do things that benefit the environment,” said Todd.

For more information or to get involved, email Todd at bree.todd@rimrockresort.com.

– With files from Cathy Ellis