"I am really grateful we were not an organization that had just excitedly completed a strategic plan in February, 2020, because we would have had to somewhat rip it up and start over."
Apr 22, 2021 2:00 PM By: Tanya Foubert 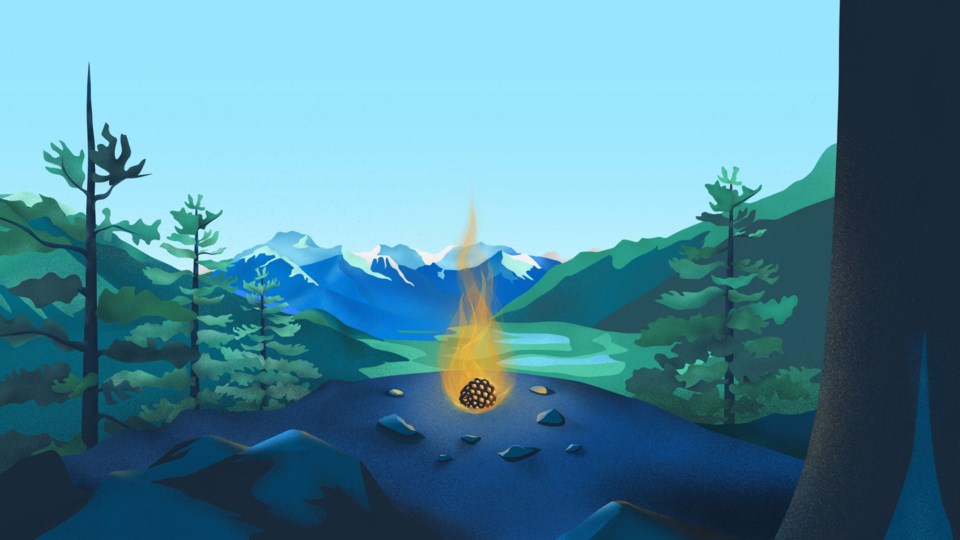 An illustration from artist Christine Majer was inspired by the natural world that surrounds The Banff Centre. CHRISTINE MAJER ILLUSTRATION

BANFF – The Banff Centre for Arts and Creativity has charted a new direction into the future with its recently released strategic plan Creative Pathways.

While work on the plan had already started when COVID-19 took centre stage last March, the current state of affairs for the storied arts institution, and the sector overall as a result of the pandemic, has factored into its strategic framework for the future.

President and CEO Janice Price said the last year has been difficult, but being able to factor the changed circumstances around the world as a result of the pandemic into the new strategic plan was critical to understanding how The Banff Centre would overcome its present situation and succeed into the future.

"We knew starting late 2019 that we would have to start doing this work," Price said. "We had had a couple of meetings and we had engaged a consultant to help us with drafting of the plan with the board, management and staff.

"I am really grateful we were not an organization that had just excitedly completed a strategic plan in February, 2020, because we would have had to somewhat rip it up and start over."

The pandemic resulted in the gutting of employment at the Banff Centre last year. It was initially announced  400 staff would be temporarily laid off, but by June, officials with the centre announced 280 staff would be permanently laid off as a result of the public health restrictions and the unfolding economic crisis.

All the programs and services offered at the Banff Centre were hit. Performances in front of live audiences were suspended, and remain so; residencies and conferences were cancelled. The Indigenous leadership program and Banff Mountain Film and Book Festival, for example, had to devise alternative methods of delivering their programs.

That being said, the campus had planned two major infrastructure projects for 2020 that were able to proceed: $7.1 million in renovations to the Eric Harvie Theatre to turn it into the new Jenny Belzberg Theatre and improvements to the Sally Borden pool and fitness centre.

Work on both have been completed; however, The Banff Centre has not been able to open either to the public for use given current public health restrictions on indoor gatherings and fitness providers.

Two working groups made up of staff still employed with The Banff Centre were tasked with reviewing drafts of the plan and providing input. By December, the board of directors was able to review a final version and voted unanimously to approve it.

While the new plan sets out five areas of focus into the future, it also recognizes there are things that will not change at The Banff Centre – like being a place for people to gather, or convene, and being located in the Treaty 7 territory and the importance of recognizing those roots.

"We are an 88-year-old institution and we need to make sure people know there are things that are not going to change," Price said.

As a result, Creative Pathways reaffirms the centre's commitment to being a non-profit multi-disciplinary educational institution; to using the campus to host conferences and meetings; as well as a continued focus delivering its leadership programs.

When it comes to re-committing to its goal of hosting summits, conferences, meetings and public presentations, Price said it is also going to also establish its own summits to host the subject experts from across Canada and the world and engage them on specific topics.

"Banff has always been a gathering place," she said. "That is what we learned from our Indigenous leadership at The Banff Centre and that is what we need to be.

"We see ourselves as having an opportunity to actually generate our own summits."

However, the world is not yet ready to travel to places like Banff given the pandemic. But when it is, Price said Creative Pathways will help set the course for its recovery.

"It is a road map and it will be realized over time," Price said, adding that includes continuing the important work already done towards Truth and Reconciliation and the 94 Calls to Action. "We really want to highlight that and the way we need to operationalize the plan to be consistently conscious of the Indigenous viewpoint in the work we do here."

Another focus on the plan is to remain committed to principles of diversity, equity and access. Price said during the creation of the plan, The Banff Centre hired an equity, diversity and access consultant to work with the institution to better define its policies and plans to address this issue.

"I think where we have really refreshed and been influenced by the current environment we are living in ... [is the] very global conversation around diversity and equity, and the engagement happening there with making sure we are really a diverse and welcoming environment here on campus for all our activities," she said. "That is an important pathway identified in the plan."

Diversifying revenue sources and identifying new opportunities to partner with and collaborate with others in the arts and culture sector. Price said finding strategic partnerships and leveraging the centre's power of place is key to the future success of the arts and educational institution.

Engaging with the local community and the Bow Valley is also an important part of the plan. Price said The Banff Centre doesn't want to be seen as an exclusive place up on the hill, but as a welcoming of locals and visitors alike.

"It is about being more present in our community, starting of course with Banff and the Bow Valley – people who know us," Price said. "I think we do more in the community than I think people frankly know, or recognize. But we want to be seen more as a resource partner and an important place when visitors come to Banff.

New children’s book by Banff author appreciates little things in life
May 10, 2021 7:00 AM