BANFF – The colours of the rainbow are forever etched into Banff’s culture, which also synched with Banff Pride organizers announcing weeklong festivities this fall.
Jun 28, 2018 6:50 AM By: Jordan Small 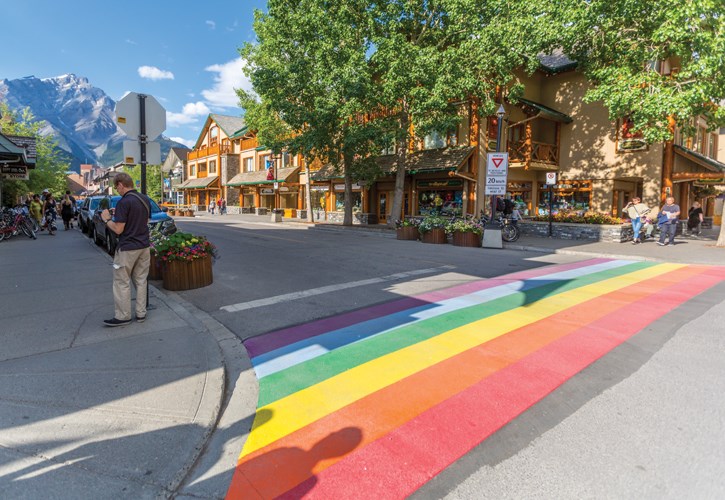 BANFF – The colours of the rainbow are forever etched into Banff’s culture, which also synched with Banff Pride organizers announcing weeklong festivities this fall.

Last week, the Town of Banff unveiled a permanent multi-coloured rainbow crosswalk that recognizes and celebrates diversity and inclusiveness in the mountain community and tourism mecca.

“It’s a huge moment for Banff,” said Corrie DiManno, a town councillor and Banff Pride committee member. “It’s very forward and that’s the way we’re going on these social human rights issues. I think Banff is going to be better for having it.”

DiManno was among the first people to try out the rainbow crosswalk, located at the busy Bear and Caribou streets intersection, when traffic barriers came down and it opened to the public on June 20.

The pride crosswalk is already being called ‘Banff’s Abbey Road,’ after the famous Beatles album cover.

“We anticipate it’ll be one of the most photographed crosswalks in Banff,” said Paul Godfrey, the Town’s director of operations. “It’s a perfect shot with Rundle and Cascade (mountains) in the background.”

Thermoplast was used to create the colours and Godfrey said the makeover was approved on a $15,000 price tag at the service review for the 2018 budget year.

The Town expects the final cost to be in the approved dollar figure area, though it could be “a little extra.”

Shane Nizinkevich, a Banff Pride committee member, is proud of the rainbow colours visible in town on a full-time basis.

He says it’s one of the most visible symbols a town can have to help support and advocate for an inclusive community.

Nizinkevich was just as proud to announce the sixth annual Banff Pride will take place Oct. 5-12 after it was in limbo following last year’s departure of co-organizer Joe Bembridge, a.k.a. Miss Ellen Q.

“Up until Saturday (June 16) there were no plans for it to be continuing,” Nizinkevich said.

The first goal of the new eight-person committee, though, was to make it happen.

This year, Banff Pride’s 18+ party will be held at Wild Bill’s on Oct. 12; however, the committee is planning to expand activities and offer a wider variety of options for the community.

“We want to do more events that are family friendly or events for people who don’t necessarily want to go to the bar,” Nizinkevich said.

“It’s important to create safe spaces that the family and community can come to … our goal is to have more of a community conversation, offer a way to give people feedback and give ideas.”

This Canada Day (July 1), Banff Pride members will have a walking float in the annual parade. They welcome anyone to join and to bring your own rainbow flag to wave.