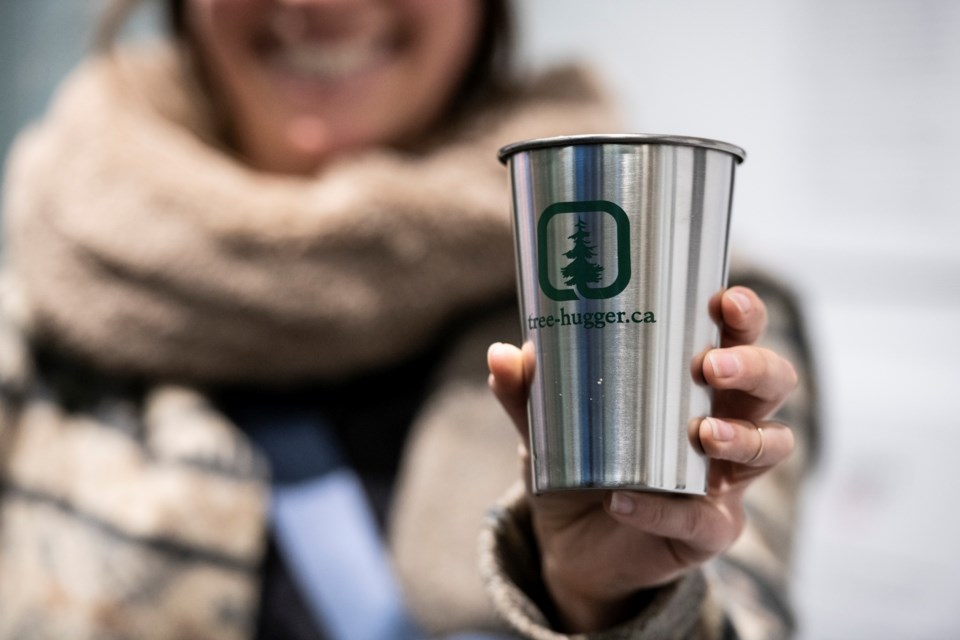 At the 2019 event, the Festival worked closely with Tree.hugger.ca which provides a re-usable cup service, which resulted in only re-usable cups being offered at the event’s bars. SUBMITTED PHOTO

BANFF – It’s been a 15-year journey for the Banff Mountain Film and Book Festival, and 2019 was an especially satisfying one for the event’s efforts to reduce waste.

This year, waste was reduced by 60 per cent over 2018, with the 2019 event generating just 500 kilograms of waste compared to 1,328 kilograms last year. And that’s not all, said Laurie Harvey, manager of strategic partnerships with the 44-year-old festival.

“We’ve been on this journey for at least 15 years and it is very satisfying this year to reduce our waste 60 per cent over last year, and then divert 90 per cent of that from going to a landfill,” Harvey said.

With environment and conservation being a strong value for the Banff Centre for Arts and Creativity and the Banff Mountain Film and Book Festival for two decades, the event began its zero waste program in 2010. Efforts to green the nine-day event include a wide range of initiatives.

The festival works with Bow Valley Power, which provides renewable energy credits to power the event and to deliver the films on tour. The festival’s World Tour Magazine is printed on paper from responsible sources (FSC).

Banff Airporter provides a complimentary downtown shuttle service for locals and visitors to leave their vehicles at home, or at their hotel. This year Roam Transit provided complimentary public transportation for volunteers and ticket holders between Lake Louise and Banff, and Banff and Canmore.

The thousands who attend the film screenings, live presentations, marketplace, panel discussions, athlete meet-ups and other events are enthusiastically encouraged to bring their own water bottles and drinking cups in an effort to reduce single-use items.

The festival promotes fresh drinking water sourced from local rivers and water tables versus bottled water, and strongly promotes and enables fast-food-to-stay, over food-to-go to reduce single use containers. To eliminate single use items where possible, the Banff Centre charges an environmental fee for compostable containers where it’s not.

At the 2019 event, the Festival worked closely with www.tree-hugger.ca which provides a re-usable cup service, which resulted in only re-usable cups being offered at the event’s bars.

“There has been an evolution in methods and materials and now more than ever we focus on reducing over recycling,” Harvey said.

“The relationship with Tree.Hugger.ca was very positive and the re-usable cups rented through Tree.Hugger.ca worked very well. We think the festival audience could feel and see our commitment and appreciated it.”

The influence extends to vendors at the marketplace too, as they are encouraged to reduce, if not eliminate, waste. At VIP social events – attended by hundreds of guests, volunteers, sponsors and staff – food options for 2019 were exclusively vegetarian.

Working with Green Event Services for several years, the festival provides zero waste recycling stations to divert approximately 90 per cent of waste from the landfill. Volunteers are trained to work alongside staff to ensure the audience is enthusiastically involved in the efforts to reduce, reuse and recycle – in that order.

“Green Event Services provides consultation and leadership; they’ve been a very important part of the festival’s success in reducing waste and diverting waste from the landfill,” Harvey said. “As part of this program, we measure our waste each year. If you don’t actually measure your waste, it is not easy to determine if you reduce it and by how much.”

While a 60 per cent reduction over last year is great news, Harvey said efforts will continue, with improvement being a constant goal.

“We will always strive to improve,” Harvey said.

“We will continue with existing programs. Next season we will also provide renewable energy credits to cover the travel of festival invited guests who come to present at the festival. We will also improve our water re-fill stations. Of course, we couldn’t be successful without the support of the entire Banff Centre team, festival volunteers, our valued partners and our audience.”