BANFF – A realistic painting of a woman from earlier centuries seems slightly more intriguing when placed beside a young woman from the 2000s casually using a cellphone.
May 9, 2019 12:41 AM By: Alana MacLeod 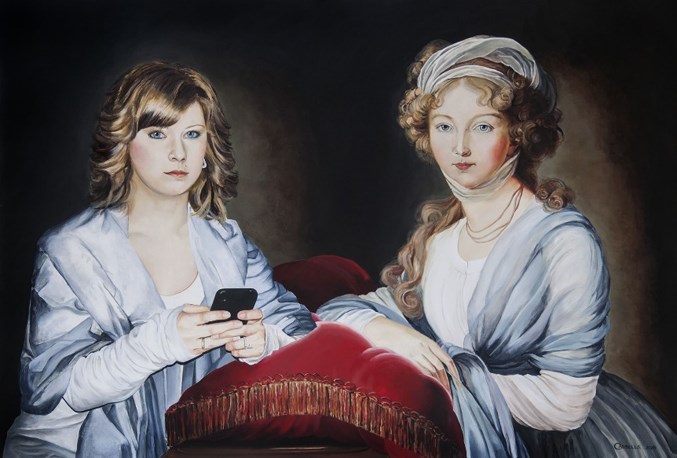 BANFF – A realistic painting of a woman from earlier centuries seems slightly more intriguing when placed beside a young woman from the 2000s casually using a cellphone.

In the spring exhibit at the Whyte Museum in Banff featuring artists Laara Cassells and Susanne Aaltonen, both with two different styles, one might be prompted to consider the then and the now, a theme that’s represented in both women’s work.

In Cassells work, women (and a few men) can be seen using tablets, or other forms of technology, alongside recreations of renaissance portraits. Cassells said, however, that a point about technology is not what she was aiming for.

“I don’t think it’s a critical message, I don’t think I’m saying that we’re not as successful or beautiful or whatever, I think times have changed,” she said.

Cassells said a lot of her inspiration came from the students she teaches. One day she noticed one of them had a striking resemblance to an old renaissance painting she recalled. Just as quickly as the old painting surfaced in her mind, so did the concept of her _after series.

“I saw a student one day and the way she was holding her phone, her hand looked exactly like a hand in a portrait I knew,” she said.

“I thought ‘wow that’s really interesting,’ but I also knew that no one in the world would recognize that but me, but I thought it would also be great to do it with old masters and match up the faces and I found I had lots and lots of students that looked similar to old masters.”

Cassells exhibit evokes a feeling of careful reflection, whether they mean too or not, and has now toured Canada with a few making their way to Germany, and coming full circle back to Alberta.

Aaltonen’s paintings, however, depict a completely different theme surrounding family and healing with undercurrents of a similar then and now theme.

“My art is essentially just paintings that are autobiographical in nature,” she said.

“I take a lot from family histories like my own childhood traumas if you will.”

Aaltonen said her relationship surrounding her family became a focal point for her art.

“I have a complicated relationship with my family, we don’t talk about things very much – things of importance or too much emotional value, it’s more surface level stuff,” she said.

Her series, Knowing How Much I Need Her Now, is a learning journey which she said just “kind of came up.”

“A lot of it was really tying to figure out my direct relationship with my family then after a couple of years, I was kind of, not exhausted, but I needed to focus on something else for a bit,” she said.

“It just sort of naturally started happening, there wasn’t really a plan or result that I had in mind. It was more of a natural progression into what happened. So I still don’t quite know my direct meaning behind it because I just wrapped it up, but I’m still working on something in kind of a similar series, so I haven’t really had time to reflect on it yet.”

While Cassells used acrylic paints with an oil finish to give it the renaissance look, Aaltonen used old photographs and paint, merging the two together to form a sculpture like creation.

“[I] use family photographs on top of heavily painted panels that I then sand and carve through, so they’re very sculptural paintings as opposed to more classical paintings,” she said.

“It’s just kind of a technique that I’ve stumbled upon in the last few years.”

Along with the two artists is work from Carl White’s series Carousel. His work is described by the Whyte Museum as a combination of his “fascination with art history and mythology together with his understanding of artistic techniques, theories and application…”

All three artists work can be seen at the Whyte Museum in Banff until June 9 in the main gallery of the Rummel Room. For more information, visit www.whyte.org/exhibitions.